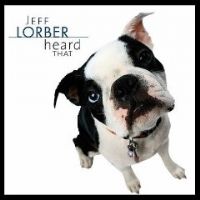 Philadelphia keyboardist JEFF LORBER is a doyen of the smooth soul scene. Indeed he was in the business long before the term was even coined. With 18 solo sets under his belt, JEFF’S just launched a brand new collection – ‘Heard That’ – his first album for Peak Records. BILL BUCKLEY of www.soulandjazzandfunk.com recently caught up with JEFF to talk about the album but couldn’t resist kicking things off by asking him about his early years in the City Of Brotherly Love and wondering if that city’s unique musical heritage had any impact on the young LORBER ….

Unfortunately I was too young to participate very much in the music scene in Philly when I was growing up, but I heard a lot of great stuff on the radio and when I was in high school I was very lucky to see quite a few amazing musical performances come to town – people like Jimi Hendrix, Frank Zappa, Pink Floyd and a number of Miles Davis’ bands. I also went to the original Woodstock. Many of those experiences were incredible and made some very strong impressions on me regarding how powerful and creative music can be. Much later I did get to play at the legendary Sigma Sound Studios. I filmed a session for something called ‘Studio Jams’ in there, just before it was closed down. Also one of my father’s friends was Bernie Lowe who was a writer, very much involved in the Cameo-Parkway thing, so I did hear indirectly about the business from him.

What about other influences on your work? What musicians did you really rate?

I love all the fusion music from the late 60s – through the 80s …. Like Return To Forever, Herbie Hancock, Chick Corea and anything from Miles, Weather Report and all the great stuff coming out from Fantasy Records…Tower of Power, Average White Band, Earth Wind And Fire… I could really go on and on. Today I don’t hear a lot of current stuff that I’m crazy about but I do follow some producers like Timbaland and Pharrell. I love Keith Jarrett also; his phrasing kills me.

Tell us now about your latest album…… and why the title ‘Heard That’?

‘Heard That’ is just a catchy phase that kind of fits with the very bluesy, R&B flavoured stuff that Rex (Rex Rideout, co-producer) and I came up with. We were referencing a lot of the early Jeff Lorber fusion grooves as well as some of our favourite bands from the 80s like the Brothers Johnson, Chic and Pleasure.

How did the tunes come about?

Most were collaborations with Rex, though I had two tracks that were previously written (although still new) – the title track and ‘Don’t Hold Back’. Then of course, there’s ‘Rehab’. That was a last minute addition.

Some people might be surprised that you chose to work on the Amy Winehouse tune. What made you go for it?

I thought it would be fun because it’s got a cool rhythmic feel and the melody translates well for piano. Though, I have to say I wasn’t too sure at first that it was a good idea. But people have been really enthusiastic when we play it live – so now I’m a little more confident.

The song’s quite transformed. In some ways it harks back to the way Ramsey Lewis treated material like ‘Hang On Sloopy’ and ‘Hard Day’s Night’ in the 60s. Would you agree? If so, was this a conscious thing or did the groove just evolve?

The track’s been featured on a new UK compilation from Jazz FM – a re-launched radio station that’s trying to keep the smooth jazz flag flying… though some critics say its output is too bland. How would you answer people who say that smooth jazz is little better than elevator music?

Those people are right … well, sometimes anyway. However, I’m always trying to push the envelope. I like to think of what I do as contemporary jazz; trying to keep the spirit alive of some of the more adventurous musicians – like those folks I mentioned earlier.

Finally what would you say has been your greatest musical achievement and what ambitions have you left?

Probably sounds a little conceited, but achievement-wise I think I’ve written some pretty cool songs and for the future – well, I’m just starting to play more internationally and I really enjoy that. The crowds in Europe and Asia are younger and more hip than in the USA… in some ways anyway.

JEFF LORBER’S ‘HEARD THAT’ is released on Peak, Concord on 17 November 2008