HAVE A LITTLE FAITH – THE FAITH EVANS INTERVIEW 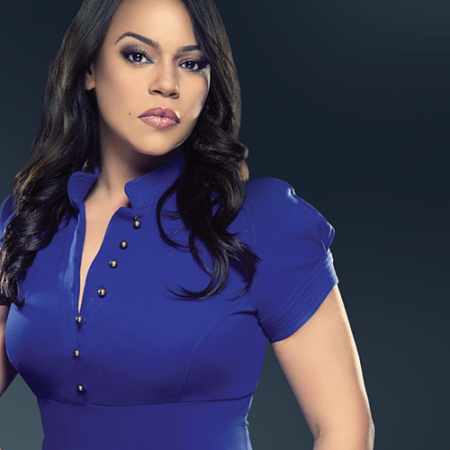 Given the fact that she’s a Grammy-winning singer/songwriter, a best-selling author (she wrote ‘Keep The Faith: A Memoir‘ in 2008), a sometime actress (she appeared in ‘The Fighting Temptations‘ alongside Beyonce in 2003) and a TV programme creator/producer (of the 2012 reality series ‘R&B Divas: Miami’) as well as a mother, ‘Incomparable‘ is a word that’s an apposite descriptor for the multi-talented, forever multitasking FAITH EVANS. It’s also the title of the 41-year-old Florida-born vocalist’s new album, her eighth long player in a storied career that has now spanned twenty years.

The ‘First Lady of Hip-hop Soul’ – as she’s been dubbed – rose to fame on Sean ‘Puffy’ Combs’ Bad Boy imprint in the mid-’90s, where she scored a slew of big US R&B hits. The death of her ex-husband rapper Notorious B.I.G. (aka Biggie Smalls born Christopher Wallace) in 1997 led to the Grammy-grabbing tribute record a year later called ‘I’ll Be Missing You,’ which became a monumental global smash in 1998. Faith left Bad Boy in 2004 and signed to Capitol.  ‘Incomparable‘ is her first solo album since 2010’s indie release, ‘Something About Faith.’ Featuring cameos from Missy Elliott and Keke Wyatt, it is arguably the chanteuse’s most potent long player of her career.

At the time of writing, Faith is present in the UK to perform two eagerly-anticipated concerts scheduled for tonight (February 27th in Birmingham at The Institute) and tomorrow (Saturday 28th in London at IndigO2). SJF’s Charles Waring managed to grab a few minutes with the songstress, where she talked about her life, music and career…

What can your UK fans expect to hear from you tonight and tomorrow?

I obviously have a lot of songs so I can never sing all the songs that people want to hear but I’ll definitely try and do all of my hit singles and a few album songs. This time around (since her last UK visit in 2010) I happen to have a couple more hits under my belt. I like to cover enough bases to satisfy my fans that are familiar with all of my albums. I’m so excited.

Thank you. I agree (laughs).

What’s the story behind it?

The album obviously has a concept. I don’t know if you have a physical copy but in the liner notes I put the song titles into a story which kind of tells where I was at during this period when I was creating the project post-divorce. The story is that it’s okay for me to go out there and date. I’m a relationship person – I’ve been married most of my adult life – but that was kind of tricky. So typically, when I find someone that I like, I like them and that’s it (laughs). I went into it not try to think of having a relationship and then met someone and we started having feelings for one another and so on and so forth, so that’s pretty much the story the album tells.

As well as singing you wrote and produced the entire album…

I put it together. I chose all the songs, did all the vocal productions, all the arrangements. It’s definitely a flat-out 100% record that I’m proud to say that I wore many hats (laughs).

You don’t seem unnerved by multi-tasking. Is it difficult juggling making music with your TV role on ‘R&B Divas’?

I’m no longer on the show (R&B divas: Miami) but yeah, I’m still actively developing and working on a few other television projects in addition to ‘Divas.’ I haven’t been on ‘R&B Divas’ since the second season but I’m still an executive producer by way of getting a cheque (laughs). But I’m not actively creatively involved anymore though.

For me, it was okay. I initially didn’t even plan on being a cast member: I was just going to be an E.P. (executive producer) and co-creator. But it made sense to help sell the show for me to be on it so I said okay but I always knew what I was and what I was not going to allow to happen to me. It was okay for me, already having my list of standards and do’s and don’ts but also I was E.P. so when it was time to go, I knew it was just time to go as a cast member. When things started taking a direction differently than what Nikki (Gilbert) and I thought the show should be initially.

What was your original concept for it?

I think the first season is the perfect example of what we wanted it to be. I was very involved in the creative direction in the first season but once we got into the second season we saw that things were different so we weren’t there for the third season (laughs).

Did it have a big impact on your personal life?

Not at all. I don’t take any of the career stuff home. Clearly my kids know what I do and sometimes they get to come to work with me but we don’t live like that. We’re very much pretty regular and normal people. That’s not my life at all.

Is working in the music business now much harder than it was when you started?

I wouldn’t say it’s harder working, but it’s definitely harder earning because I have a family and I don’t like to be away from home that long. I could make a great living if I was happy to be on the road. That’s the good thing about our genre and good music is that you can definitely make a living doing shows and being on the road but for me I have to balance it out and just tap into other things. It depends on other revenue streams because I still have a family and that comes first for me.

On ‘Incomparable’ you’ve got Missy Elliott, who you’ve worked with before. What’s it like working with her again?

Missy is like one of the funniest people you could ever meet. She could easily be a comedian (laughs). It’s always fun. We didn’t record together but I went to meet up with her a couple of times, to play her the record and just talk to her about it and catch up because we hadn’t talked in a while. But she’s just always a fun person to be around and I knew she was going to do exactly what she did to the song. Initially she was like: how do you want me approach it? I said we just want you to do what we love you doing (laughs).

And contrasting with that, you’ve got Karen Clark-Sheard guesting on ‘Paradise.’ How influential has gospel music been to your own style?

Oh, way influential. Karen Clark-Sheard was my very first musical influence. We’ve happened to become friends over the years and I spent some time in Detroit with her recently so that’s a relationship that I’m very happy about. It’s amazing because when I was younger I would just sit there and listen to them and rewind the recorder and try and figure out all the moves they were doing. That was my very first musical influence.

You also do a duet with Keke Wyatt, your co-star from ‘R&B Divas.’ What was it like working with her?

The same thing I said about Missy would apply to her. You can kind of tell that if you’ve seen ‘R&B Divas.’ She has this crazy comedic side; pulling funny faces and little one-liners. She’s hilarious and I love her. I go and visit her a lot. The show was actually the way our friendship started but when I wasn’t a part of the show anymore that wasn’t the end of our friendship. I’m really glad. She’s one of the most talented singers on this earth. She is very underrated and I mean in a commercial sense, but if you have heard her voice you can’t deny that she’s one of the best singers on the planet.