GOING FORWARD WITH THE HEAVIES…. 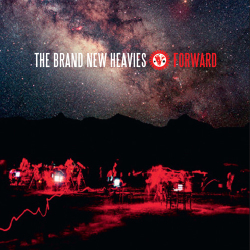 Brit soul perennials, THE BRAND NEW HEAVIES are all set to release a brand-new album – ‘FORWARD’ (see our reviews archive). With it being a full six years since their last release SJF felt it was time to catch up with the group to find out what’s been going down. Main man, JAN KINCAID was quick to oblige and he began by telling us why it’s taken the HEAVIES so long to come up with a new set….

JK: We’ve been pretty consistently busy for the last few years. A big part of our business is playing live and we’ve been on the road all over. Simon (Bartholomew) and Andrew (Levy) have also started families. Having said that we did leave it a long time but sometimes that’s the way it is.

Why have you called the new album FORWARD?

It’s pretty simple really. We feel like we’re in a positive place as a band that has been around for a while. The business has changed shape a lot since we started and we’ve been on a journey shaping our business for the last few years and are feeling positive about our sound and the vibe in general. Things are pretty tough out there right now and we thought ‘Forward’ was a simple positive word to show where we should all be looking.

The set sees you launch a new vocalist – DAWN JOSEPH –tell us a bit about her….

Dawn is great addition to our sound and a well established, highly respected singer on the professional circuit who’s worked with a number of big names. Her voice is different to Ndea’s, but that’s the point …, it’s nice to work with a different sound too which is why we always have done. She’s a lot of fun live too and brings the party vibe.

However for the lead single (‘Sunlight’) you’re relying on N’DEA DAVENPORT again… why?And don’t you think that shows a lack of confidence in DAWN?

It’s got nothing to do with a lack of anything, if we weren’t confident we wouldn’t be working with her at all. Actually we hadn’t even met Dawn when we started work on ‘Sunlight’, and I always heard N’dea’s vocal on it from the beginning … and she nails it.

That single ‘Sunlight’ is a great slab of upbeat optimism … and the sound’s so typical of the BNHs … same with cuts like ‘Lifestyle’ and the instrumental title track – how exactly would you define your sound… and how different is it now to when you started all those years ago?

I think the easiest way to describe it is it’s a reflection of our diverse creative personalities and tastes which have filled out and distilled over the years. It’s obviously influenced by the music we listened to growing up as clubbers and collectors but also we try to stay classic in our sound … we know what we’re good at and are very comfortable in that zone. It works for us to pull from the eras of great soul music and song writing but also have an ear on what’s going on around us and in all the different styles that are fusing together. We also have always had an element of positivity in our music.

There’s some stuff on the album that’s a bit different for you… I’m thinking about ‘Spice Of Life’ for starters – could be described as electronic reggae…. what’s that one all about… what were you trying to achieve?

That song was the brain child of Simon and I guess is partly homage to a certain kind of sound in reggae music but it’s not taking itself too seriously either. It’s definitely not trying to be a reggae track per se but I love the fact that we do stuff like that too, just coz we love it. We’re very diverse as a rhythm section and quite unique from years of playing together and there’s a lot of fun to be had in flexing our musical legs a little. The track’s even got a touch of The Specials in it too, and why not?

The closing cut, ‘One More The Road’, is a touch different too – a little lighter and carefree…. poppier… tell us about that one…. a male vocal too – who is it… and how do you decide what kind of vocal a particular song demands?

That song was my baby and it’s my voice you hear on it. I love mood songs and words that tell a story – those minutes of listening should create a feeling you want to come back to and you can see yourself in. I think that a lot of pop music today is so boring in its limited scope both in song writing and production. I don’t get this dumbing down shit … I think peoples’ ears can take more than that. It’s quite a romantic song too I guess, but it’s about goodbyes, about that moment when it’s so hard to just turn away, the rest is self explanatory.

‘Itzine’ is a jazzy instrumental… what’s that one about … and the title?

We like to really flex as a band with all guns blazing… rhythm section, blazing horns, solos, percussion, and it’s fun. It grew from a jam as a lot of our instrumentals do. All of our guys – like the horns we play with regularly – are quite telepathic now so things can happen quite quickly. Our next album project may well be instrumental as we’ve never done an entire album like that. The title doesn’t really mean anything, just a bit of an in joke.

‘A Little Funk In Your Pocket’ is another good track … but I wouldn’t describe it as a funk… in fact it wouldn’t be about of place on smooth jazz radio… so why the title?

It’s a “little” funk ha-ha…again it’s a reflection of another side and sound, a bit smoother on the groove, kind of laid back jazzy vibe and easy going vocal. You can only really have a little funk in there anyway, you’ve gotta leave room for your keys and your phone right?

Then there’s the cover of ‘Turn The Music up’…. why did you go or that one. Your version’s not too different to the original … what do you think you’ve added to it?

There’s a story to that one. We originally did it as an instrumental – just as a straight homage to one of our favourite tracks from back in the day with amazing playing and high production values. Then we played it to N’dea who then wrote a couple of short verses which really added a new dimension. Unfortunately the people who wrote the original wouldn’t let us do it like that, so the track ended up more like the original… but it was just too good to waste in our opinion.

The music from that era definitely had a massive influence. Artists like Earth Wind and Fire. Light of the World, The Crusaders, GQ, of course, James Brown and the J.B’s, the Meters, Kool and the Gang…you name it. The classic eras of black music and song writing and bands had a massive influence for us and still do. But since then, Disco, hip hop, reggae, rock, jazz, latin music, electronica have all played their part. I think my personal heroes are mostly from those eras. I admire artists who aren’t afraid to be themselves and who are in a creative environment where they’re allowed to be. There is not a lot of time or money given to developing artists anymore and when you think that nearly all of the great artists of the last century usually developed over time and success sometimes took a while. Today partly coz of finance, partly lack of vision and all of the business being in a process of reorganisation for the digital age there is such a short shelf life for new artists. I have no doubt there’s a lot of talent out there … though, they just need a good network and people to support them; with that great things are possible. I think we need to get back to a balance where the talent and material live up to the marketing and hype. This morning I was listening to Hiatus Hayote, that’s a heavy album for sure.

What do you hope to achieve with the album and what can we expect from you next?

We hope the album gives as much enjoyment to people that we had making it. Can’t wait to get on the road with it and flex live wise. We think it has all the makings of classic Heavies’ album and something for everyone. Next we’re on the road to promote it and at some point will be making a start on this instrumental record, and anything else that comes along the way.

FORWARD by the BRAND NEW HEAVIES is released on Heavy Tone Records on April 29th.