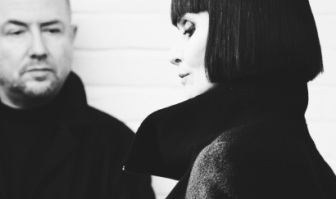 Everyone’s favourite smooth soul duo, SWING OUT SISTER have a new and long-awaited album out in June. ‘Almost Persuaded’ is the collection’s name and leaked tracks and sneak previews reveal that once again CORINNE DREWERY and ANDY CONNELL have crafted a work of understated beauty that offers the pair’s unique twist on sophisticated 60s/70s soul liberally sprinkled with Jimmy Webb influences and garnished with the odd smooth jazz flourish and cinematic sweep. Incredibly the pair have been doing just that now for nearly 30 years and when we caught up with them the first thing we wanted to know is where on earth do the manage to fresh motivation and inspiration…

CORINNE: All kinds of places…but I suppose Andy and I come from a different direction as we make different contributions to our music. I usually respond to the music that Andy writes…the lyrics describing the feeling that Andy’s musical landscape creates in my mind, although I have mental notes of phrases and thoughts that pop into my head, a newspaper headline, a line from a film, a conversation I have overheard. Travel always changes the way you think…a long drive, landing in a different country, the shock of the new…but when you get home to familiar ground, that’s when inspiration comes rushing in and finds its way into whatever you are creating.

This new album – ‘Almost Persuaded’ is your tenth…. how does it differ from what’s gone before…. what’s its USP?

CORINNE: For the first time we made an album with an audience. We started a Pledge music campaign, so those who had signed up for our album received a step by step report of work in progress. We made short films to post every few weeks to show work in progress, and received feedback from our listeners. As far as the music goes, the songs have grown with us. If anything ‘Almost Persuaded’ is a little more laid back, maybe a little more self assured. Yes, ten albums down the line, we still strive to find music that covers new ground for us. With every album we hope we are getting closer to the classic timeless songs we always wanted to write.

Why did you choose to go via Pledge Music – how does that work?

CORINNE: .We thought putting our album on the Pledge Music site might add the pressure that was missing in the absence of a record label, but it didn’t really work out that way .Instead we got so into making and posting films of the making of the album, the journey was almost more enjoyable for us and our Pledge audience than the actual completion of the album. But I think everyone was relieved when we actually finished it! And of course, it does put you directly in contact with your audience which is inspiring. We have such interesting followers and it’s great to hear their feedback from all over the world.

I’m guessing that it’s hard to make a decent living from music these days…. I mean brokering deals, setting up tours, working with the whole new digital thing

CORINNE: Yes, it’s getting harder to make a decent living from anything….you have to be a jack of all trades nowadays whatever you do. But if you love what you do you don’t mind…we didn’t expect much when we started…so we started out small and were able to be self-sufficient. It’s almost like things have come full circle now.

OK so back to the new album ‘Almost Persuaded’… why choose that song as the title….

CORINNE: That was the last song to be completed…although we weren’t sure we had actually finished the album. When an album has been three years in the making it’s difficult to know when to stop! It took some persuasion for us to agree the song was finished, too, as Andy had written the music first as a kind of continuous cycle, and where I had placed the verse and chorus was in a completely different place to where he had imagined it.

Right now we love the track ‘All In A Heartbeat’ … what can you tell us about that one…. and why two mixes… which do you prefer?

CORINNE: We couldn’t decide…although there were about ten versions on the go at one time. I still can’t decide…

I read the song ‘I Wish I Knew’ has a long evolution… way back to your childhood, Corinne…. tell us about that one …

CORINNE: Andy came up with the music and I sang a melody over it….and suddenly I realized I had sung that very same melody in a song that I made up aged five – complaining to my mum that I didn’t want to go to school… you know “Why must I wake up in the morning ….I don’t want to go to school” ….. A song can be stored away for years…

Right through your career people have made comparison between you and Dusty Springfield…. was she an influence on you, Corinne… anyone else who influenced you?

CORINNE: .Dusty was one of the first singers I remember as a child on a programme called Ready Steady Go. It was on every week and featured performances of all the latest chart hits. I think all my early influences came from that programme… Dusty, Dionne Warwick, Sandie Shaw, Petula Clark, The Supremes…I think a lot of what I liked about them was the songs they were singing and the arrangements, too, although I didn’t realize at the time. Then later on I used to listen to the radio and records my parents bought…The Beach Boys, Motown…I remember hearing The Beatles’ ‘Sergeant Pepper’s’ album, The Beach Boys’ ‘Good Vibrations and Dionne Warwick’s ‘Do You Know The Way to San Jose?’ around the same time, I was about seven…and I was in heaven!

Anyone else had an impact?

CORINNE: Yes… David Bowie was a big influence in my teens…his experimental approach to making music was so inspiring, he made anything seem possible. Then I got into northern soul…dancing all night to rare US imports in a packed ballroom in a deserted seaside resort was the best way to discover underground rib. But there are so many influences. And they keep coming!

Andy…. sorry to leave you out…. who were you influences… musical heroes when you were starting out…. who do you listen to now?

ANDY: I had a bit of a tough time of it in my formative years. I was a big Genesis fan and Weather Report were the first band I ever saw live, so you can imagine my disappointment when Punk came along and we all had to pretend to like The Clash for a while. XTC got me through that period. Saw them a few times, great band. I suppose going through my late teens being disparaged for my music tastes did build a certain fortitude in terms of not being afraid to go my own way and like what I liked, however unfashionable. Certainly, when we got the chance to forge our own sound, the various ingredients we were bringing to the pot were anything but cool at the time. Bacharach, John Barry, Morricone, Dusty Springfield, Barry White, old TV themes like Banacek, McMillan & Wife, Columbo… none of them were being lauded on the supposedly hip London scene of that time. Of course, all that changed. I listen to less and less music now, sadly. I think that’s true of most of us. It’s pretty much exclusively Morricone these days, with a little Keith Jarrett in the early hours when the wine’s kicked in…!

OK….Back to the album, then… what do you hope people will take away from it?

ANDY: It sounds selfish, no doubt, but I don’t mind what they take away, or if they take anything at all. The all-important thing is that we like it, which we do. We’ve never really known who our audience was, probably never really imagined we’d have one, so the idea of making something they’d appreciate never really became a factor. The waters are muddier now, especially since we’ve been doing the Pledge campaign, where we encourage and enjoy a little feedback with fans and friends as the record develops, but we’re generally too wrapped up in our own imaginings to take anything onboard in terms of how it should progress creatively. I suppose we’d like the listener to experience the same satisfaction and peace that we get from it, but if they experience something different, well that’s fine with me.

Almost finally… how would you define the Swing Out Sister sound as it is now…. and how different is it to when you started?

ANDY: Sorry, I’ve no idea. I didn’t know what our sound was when we started, we were too busy making it. I recognize it now, of course after all this time, so maybe after the same amount of time has passed, I’ll be able to recognize what our sound is now and compare the differences. I think your sound is measured against the particular times you find yourself in. The mid 80’s was synths and makeup and posturing, so our brass and string arrangements and electronic percussion had an energy that was somehow amplified by it being so against the grain of what else was around, as was Corinne’s homemade chic look. Nowadays, everything has splintered, everything is eclectic, and it’s much easier to make any kind of record at the drop of a hat. Very hard to have a sound now. I had to fill in a box on some website or another describing how the record sounded and I ended up with ‘Cinematic Soul Jazz’. I guess that kind of covers it. I’m not being very helpful, am I?

Almost finally #2 … will you be touring any time soon?

ANDY: Going to Japan in October. I’m sure there’ll be other dates around that time, but nothing firm yet…

Finally how can we find out more?

ANDY: We have a Facebook page, as one must these days. It’s not all that informative, but hey, sometimes it’s still nice not to find out too much…