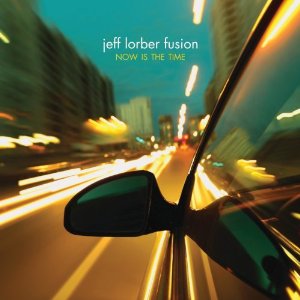 Genial piano man JEFF LORBER has enjoyed a long and distinguished musical career. The Philadelphian’s time in the jazz biz began in 1977 with his band THE JEFF LORBER FUSION whose music – as the name implies – was that heady mix of jazz, rock, R&B, funk and electric sounds that people soon dubbed “fusion”. In 1981 LORBER disbanded FUSION to concentrate on a solo career and since then he’s been acknowledged as major player on the smooth/lite jazz circuit. Now with a brand new album, Grammy-nominated LORBER has resurrected the FUSION concept. With a core of players – JIMMY HASLIP, ERIC MARIENTHAL, PAUL JACKSON JR., VINNIE COLAIUTA and RANDY BRECKER – forming a new band, LORBER has recorded a batch of songs from the heady days of FUSION. The 11 tracker’s called ‘Now Is The Time’ and jazzers who only know his solo work will be more than surprised with the results from this star-studded ensemble. When LORBER was recently in the UK we had the opportunity to ask him if the new band will have any degree of permanence….. or maybe the recording is just a one off….

Not at all….I have been touring a great deal with all these players and even though they’re all very busy I’m hoping to tour and record with them in the future.

Are there any difference between recording an artist in your own right and recording as part of a band?

The band concept with this album means we feature all players quite a bit. If it was a JEFF LORBER solo album I might have different sax players or a new bassist on each track. But here on ‘Now Is The Time’ JIMMY (HASLIP) and ERIC (MARIENTHAL) are strongly represented on almost every song.

With this new FUSION, you’ve opted to record an album of the best of your old material … why?

Well, we thought it would be fun to “re invent” these pieces and I have to admit that going out on tour and playing this material is exhilarating and we do get a very positive response with everything.  Anyway, the old material only comprises half the album.

How did you chose the numbers… did other band members get a vote?

Jimmy was very involved as co producer during the tracking stage and later on Bobby Colomby (the third co-producer) “got a vote” also.

How closely did you fashion the new treatments on the originals?

Some are fairly close like ‘Watersign’ although the players and overall tone and texture are very different. Some are completely re interpreted like ‘Curtains’

What’s your favourite track on the set?

Hard to say… they’re all my “babies.” Right now I have to say ‘Dr. Moy’ is one of the funkiest…

How would you counter someone who said that the album might represent a waning of creativity – or even a lack of enthusiasm?

I have to say that this record has generated more enthusiasm than anything else I’ve recorded in a while both from the musicians that were recording it and the public reception to what we’ve done.

What next for Jeff Lorber?