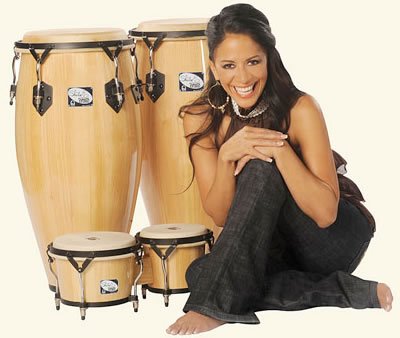 “My life is percussion,” confesses SHEILA E to SJF’s Charles Waring in a transatlantic phone interview to promote ‘Icon,’ her first solo album in over a decade. A stylistic departure from the smooth jazz-oriented sound of her previous couple of long players, ‘Icon‘ proves to be a heady, percussion-led brew that seamlessly blends soul, pop, jazz, rock and funk flavours with Ms. Escovedo’s signature Latin tropes.

In this, the second part of an in-depth interview with SHEILA E – ahead of the release of ‘Icon’ and her keenly-anticipated one-off show in London on November 23rd at Under The Bridge – the singer/songwriter/drummer reflects on her past and talks about her formative years, working with Prince and Ringo Starr as well as participating in a US TV reality show called Gone Country…

Going right back to the beginning, when did you first show an interest in music?

I used to listen to my dad (percussion legend) Pete Escovedo (pictured left with Sheila) practice in the house everyday. He would rehearse and practice to vinyl LPs and would have jam sessions on the weekend. Sometimes his band would rehearse in the living room, so there was music in the house almost all of the time. I loved music growing up. When I watched my dad play I would play his congas or timbales for a minute and then go back outside and play but once he saw that I was a little bit interested in playing he asked me to play violin. I took violin for 5 years from the third grade to the eighth grade and got scholarships to play but I ended up not playing because I had been jamming with a couple of local bands when I was 14. Then I started playing drums in a band for a couple of months and then switched over to percussion. Then at 15 years old I became a percussion player in my dad’s band. They were called AZTECA and were signed to CBS and had been playing with the Temptations, Stevie Wonder and Earth, Wind & Fire. They had been out on these major tours and my dad’s percussion player, Victor Pantoja, was not available to play because he had got sick. So I pleaded with my dad: “please Pops, let me play in the show.” He said: “you’re 15, you’re too young and you don’t know anything.” I said: “but I do, I know the music.”

What made him change his mind?

My mum talked him into it so eventually he let me play. It was a fantastic time for me because that was the one day that I knew that this was what I was supposed to do; to play music. That one performance of playing with him was almost like an out-of-body experience; the level of musicianship that I had to achieve to even be in that band –  a 16/18 piece band – and be a part of that, was so powerful. Then at the time Pops asked me to take a solo and I just went to a place that I had never gone before. I always give 150% but it was more spiritual than anything and I’d never felt that before. Prior to that, I was an athlete. I was a sprint runner and training to be in the Olympics. That’s what I wanted to do so at that time. I was running track and breaking records in schools and competitions all over the United States where we were competing. So up until that point I had no idea I’d be a musician.

But then you had this vision, almost, when you played on stage with your Dad?

Absolutely! Yeah, it was something that I’d never experienced before and when we were done playing, my dad grabbed me, we hugged each other and we cried because he just had no idea. He said: “I did not know that you knew that much.” I said: “Pops, I didn’t know either.” I had no idea. I don’t even know where I learned all that. I played things that I’d never played before. It took me to a spiritual place. That night after that performance, I told Pops: “I’ve got to go out on tour with you. This is what I’m supposed to do.” He just looked at me like: “Oh God! I guess this is the moment that I didn’t want to see but this is what it is.” Two weeks later he took me out on tour and we went to Bogota, Colombia, in South America and I haven’t looked back since.

Was your first studio session ‘Yesterday’s Dreams’ by fusion bassist Alphonso Johnson in ’76?

Pretty close to it. I think it was if not there was another session I did with an artist he was on Fantasy Records at the time; his name was John Handy. I’m not sure if that one was the first one or Alphonso Johnson, but they were pretty close together.

So how did you get into the session scene on the West Coast?

The Bay Area music scene is huge. You’ve got so many great artists and bands that come from the Bay Area, like Santana, my dad’s band Azteca, Graham Central Station, Sly and The Family Stone, Tower Of Power, the Grateful Dead, and Jefferson Airplane. I mean the list goes on and on. So there were a lot of artists. There was a local record company called Fantasy Records. We had a lot of artists coming in to do records at Fantasy. But it started with not only that but also playing with my dad and meeting everyone and playing with a lot of artists. Once we met Billy Cobham. He came into town and then saw my dad and me play and wanted to produce a record on us. He did and that’s when I met Alphonso (Johnson): they were all playing together and that led to other opportunities and then playing with George Duke, we were out touring. I toured a lot with him, in Europe and the States. With George Duke I played with other artists’ shows that were called Cool Jazz festivals and that’s how I met a lot of people in the ’70s like Ashford and Simpson, George Benson, LTD with Jeffrey Osborne, all of those bands, all of those types of artists. We were playing on the same bill and it was great because it was not only R&B and Motown and music like that but you had people like George Duke and George Benson playing jazz and fusion and a little bit of Brazilian. It was all a mixture of music, which was great, and at that time in the ’70s, Bill Graham (a San Francisco concert promoter) did Bill Graham Presents… in the Bay Area. It was all these different bands together: it wasn’t just pop music or R&B or rock ‘n’ roll, it was all different types of bands together and you would go there and it would just be a day of music.

Can you remember what sort of musicians influenced tune inspired you when you were growing up?

Well, the music that my dad had in the house, definitely, which was Tito Puente, who became my godfather. He and my dad were friends at fifteen, so Tito Puente was an influence and so was Pedro Rodriguez and Mongo Santamaria. And my dad had Miles Davis records and was playing Frank Sinatra and Sammy Davis Jr from the Rat Pack. I was amazed by Sammy Davis Jr as an artist. I think I was nine and I learned an entire record of his.

It had a black album cover and Buddy Rich was on the drums. I learned all the horn lines too. It was not that I was necessarily listening to just the drums, ‘cos it was Buddy Rich on the drums – I love him – but it was also the whole idea of the horn section and the their lines and how he interacted with them. I felt like I was there at the show. I learned that entire record in the week. It was amazing.

In terms of drummers, you mentioned Buddy Rich and Billy Cobham. Were there any other drummers that influenced you and had a big effect on your own music-making?

Yeah, after Billy, I did some shows and played in a band with Harvey Mason, which was great. I think a lot of my hi-hat patterns come from Harvey and lot of the rolls and double kick pedals and odd time signatures I use come from Billy. And of course my dad was a big influence as far as percussion, and Tito Puente. When the Beatles came into town it was just something amazing for us, so Ringo (Starr) was definitely an inspiration to me as well. He was just incredible, not only as a drummer, but also as a songwriter as well.

Yes and you got to play with him a few years ago, didn’t you?

It was pretty incredible to be asked to play with him. I thought I’d be playing percussion with his band and didn’t think that I be playing drums. I asked the management company: “what is he going to play if I’m playing the drums?” They said you’ll both play together. It was pretty interesting. They sent me at least 26 songs and since I knew I had to play with Ringo and play at the same time a lot of the songs I had to break down how to play like him, which made it pretty challenging principally because of the way that he swung. It was so different from anything that I’d ever heard and I didn’t realise it. You know all of the songs and the melodies but when you go to play something like someone else would, it was challenging. It took me a minute to literally break it down. I noticed and realised that the way he leads off his snare to do a tom fill was in weird places. It didn’t feel right for me to play it but it sounded right when I played to his music…and if I didn’t play like that, it didn’t sound like Ringo’s music or the Beatles’. Listening to the music, I noticed that he was actually one of the other singers in a sense; his drum fill would be something that was right after a vocal line and then he would ‘say’ something with the timbales, so it would be more like a conversation. I thought it was brilliant.