FROM THE BACK OF BEYOND… THE NTJAM ROSIE INTERVIEW 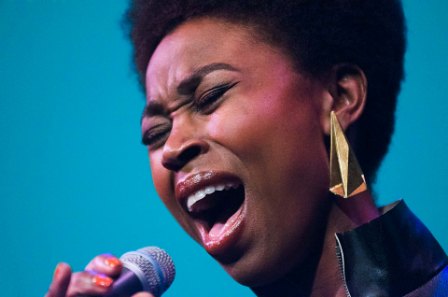 With her third album, ‘At The Back Of Beyond’, Cameroon-born NTJAM ROSIE has started to make waves on the neo-soul scene. Her intense and deeply personal music seems to strike a chord with discerning soul folk tired of hackneyed recreations of old styles and sounds. We caught up with Ntjam (pronounced “jam”) in Rotterdam, the city she now calls home, to try to discover what makes her music so unique. But we started by asking about her background and first journeys into music…..

I was born and raised in Cameroon but have been living in Holland since the age of nine. My childhood was typically African…a huge family, never alone, always music around. Moving to Holland was hard in the beginning because of the language and different culture. But I adapted easily since I was so young. As a kid you tend to blend into new places easier than when you’re older.

When did you decide to make a career in music?

I got my calling when I was about twenty years old. After high school I thought it would be smart to study social studies. But after three months, I felt so unhappy. Something had to change. God’s voice called me, it was music that I should be doing. So I quit the social studies and took a year of preparation for the entrance exam at the Rotterdam Conservatory ( Codarts ). It was the best decision I have ever made in my career. I now have a bachelor in music and a minor in teaching.

Who were your musical inspirations and influences?

As a child I got most of my inspiration from the radio in Cameroon. That went from Madonna to Michael Jackson, George Michael and traditional music from Cameroon and the rest of Africa. In my teenage years I watched MTV a lot and saw a lot of pop and R&B. I saw Sade on there for the first time and was forever mesmerized. Badu and the whole neo soul movement, I loved too! After that came jazz, Brazilian music, fusion, late seventies soul ( Patrice Rushen, Stevie Wonder, Donny Hathaway, Debra Laws, Deniece Williams and the list goes on and on ). Nowadays I also dwell in the alternative sounds, singer-songwriter, and folk. I like anything authentic that breathes personality, originality, groove and musicality and that brings joy and tranquillity to my soul.

Tell us about your first two albums?

My first album was ‘Atouba’ ( January 2008 on Appletree Records). It was an ode to my roots. Atouba is the name of my late grandmother, in other words to my personal roots. I am a person that likes to start at the beginning. I love my heritage, my African roots and don’t want to ever forget where I come from. My grandmother taught me to put God first, and never give up on my dreams no matter what anyone would tell me. She believed in me, before I even knew what it meant to have such belief. ‘Atouba’ is young and adventurous mix of electronic soul and African music. ‘Elle’ is my second album. It came out in October 2010 independently. On this record I felt the urge to discover why I liked neo soul so much. I’d also just finished my conservatory studies. So I was full of jazz and Brazilian influences. After doing some research I came to the late seventies soul sound. I was hooked. Jazz and soul meets in this album.

The new album ‘At The Back Of beyond’ is on your own label. … Gentle Daze. When and why did you decide to start a label….?

Starting my own label was, and still is pure necessity after splitting with Appletree records in 2009. I hope to sign a new deal one day with a dedicated label that has a bigger network than I have and a bigger platform in general. So it’s not that I don’t want to work with a label. I just haven’t found the right partner. Till then I will keep on releasing my music independently on Gentle Daze records. Who knows? Maybe Sony, Blue Note, or Virgin records will knock on my door for distribution and promotion? That way I keep my artistic freedom…that is actually my dream scenario. But let’s see what will happen.

More on the album… Why call it ‘At The Back Of Beyond’?

‘At The Back Of Beyond’ means a place hard to get to. This album leads you to inside of my heart and soul. It’s about what moves me… what do I believe in…what drives me. To know all that you need to come where my heart is. And that is in a place far away deep inside of me. But on this record I invite the listener to come and get to know me a little bit better.

You describe you music on it as “crossover” – what exactly do you mean by that?

By crossover I mean a mixture of soul jazz world and pop. I cross from culture to culture, from genre to genre. A bit of Brazil, Africa, Europe, America. I am all these things so is my music.

What track on the album do you think best shows off your distinctive style and sound?

I hope to touch thousands if not millions of souls all across the globe with this album. The sky is the limit is what I always say.

What are your plans for the future – long and short term?

My future is in God’s hands. I want to keep on making music that is authentic and that heals the soul. Music is my gift, therefore my duty is not to give up on making it in this industry.

NTJAM ROSIE’S At The Back Of Beyond is out now on Gentle Daze Records… go to our review archive for a full review.