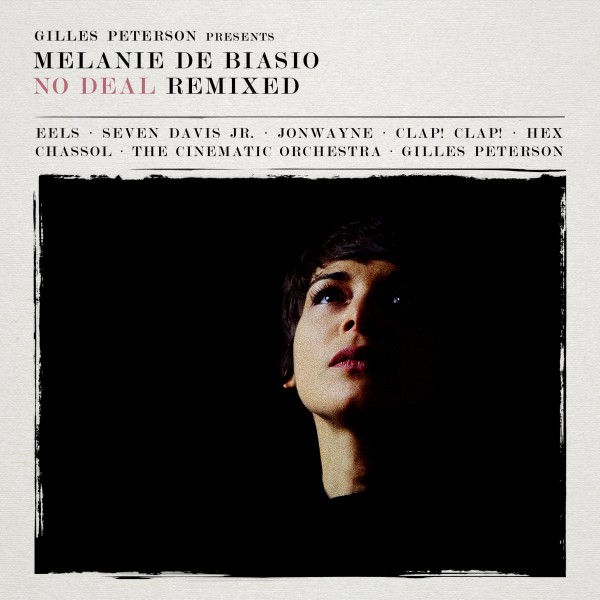 On the back of her astounding second album, ‘No Deal‘ – released last Spring and which had UK critics raving so much that it resulted in the singer’s appearance on Jools Holland’s Later TV programme – jazz-influenced Belgian singer/songwriter/flautist MELANIE DE BIASIO follows it up with a ‘new’ long player which will released on February 23rd 2015. As its title – ‘No Deal Remixed‘ – reveals, it represents a re-envisioning of her 2014 album by a bevy of celebrated mix-meisters. The project has been curated by British DJ, tastemaker and label boss, Gilles Peterson, and features newly deconstructed versions of key songs from ‘No Deal’ by Toshio Matsuura, the Cinematic Orchestra, Eels, Seven Davis Jr, Hex, Jon Wayne and Chassol.

Belgium-born Di Biasio – who became the recipient of a Best Session Award at the 10th Worldwide Awards for her performance on Gilles Peterson’s BBC6 radio show – has been earning plaudits for her spellbinding live performances as well as her recordings. Here, on the eve of her new LP, the charismatic chanteuse talks at length to SJF’s Charles Waring about the original ‘No Deal album plus her formative years and key influences…

What’s the story behind the album, ‘No Deal?’

It’s all about love. It’s a story with a beginning but maybe not an ending. The story is quite large. It’s hard and not so easy to answer because I think it’s all about love and all about souls and silence and space. Actually it’s not really my story …but I think that’s not the point.

Are you imagining yourself in somebody else’s shoes then?

No, but I think that what was important to me was to create a space in the sound and the music and this record to let the listener put his emotions, dreams, and a space with no time really.

How important are the band that plays with you important to your sound?

I chose them because they have a really singular sound and a specific atmosphere and I don’t control them so much. I fell in love with their sound and the way they listen; how they touch their instruments and their ability to build a sound together. And it was really fluid, the meeting with them. I met Pascal Paulus (keys) and Pascal Mohy (piano) in the Conservatoire de Bruxelles in Belgium and the drummer, (Dre Pallemaerts), he was my teacher for one year. I met him at school. On the tour for the first album (‘A Stomach Is Burning’), we met again and he really loved the music and the atmosphere and it was really, really fluid.

How does this first album compare with your debut album, ‘A Stomach Is Burning’?

I think this one is… more me (laughs).

Because the first one I had produced by a jazz record company (Igloo) so I had three days in a studio. It was more like the old jazz way, the record, so with this one I think I took more time to think about the sound and make my own little mixes. Also we had three days of recording sessions with the guys but it was like a painting – in the studio we created pictures and then I had to make the paint with all these textures and I created this story with all the sounds we created in the studio and it’s now thirty-five minutes of those textures.  I also play flute on this one. I didn’t play flute on the first one… and the rhythm and the development of this record is more me than the first one.

In terms of tone and mood it’s quite dark. Does it reflect your own personality?

You play flute on the album. How long have you been playing it?

I was eight and I think it was because it was an extension of the voice. I don’t know. It was a choice I made a long time ago and today I really like this sound but (in the past) I really hated it because of the studying and as a child you’d like to play football or play with dolls.

You had to practice a lot then?

(Laughs) Yeah! But I really like the medium part (register) of the flute because of its woody tone. It’s very sweet and I practice. I play flute as I sing so I try to develop a story and just try to say the essence of my mood.

Did you listen to any jazz flute players while you were growing up?

Yeah, I love Yusef Lateef, for example, but I listen to a lot of instrumentals, musicians, but not so much flute…

How important is jazz as an influence on your music?

For me jazz means freedom: freedom delivering the mood you are in the present. In my music there is a lot of improvisation – but it’s not jazz improvisation with many notes or virtuosity. For me improvisation means to build something, to make a construction and when we perform live, for example, we have a repertoire but the repertoire is chosen, fifteen minutes or twenty minutes before the show. All the concert is built by collective improvisation based on this music of ‘No Deal’ but we don’t know how it’s going to be and it’s different every concert.

When did you start singing seriously?

From the beginning when I was four or five.

So you started singing before you played the flute?

Oh yeah, I don’t remember a time when I was not singing. I think I was singing before I could talk (laughs). I didn’t learn so much a professional way of singing or practising – I practised more the breath in the body, how to breathe rather than the vocal. The voice is an extension of the body so if the body is available and has got all the echoes inside, you know, then I think the voice is gonna be what it has to be. I don’t try to control what comes out of the mouth, I just try to focus on my feet, my breath… my body.