FROM A DISTANCE: Melody Gardot on Love, Lockdown, and Working With Sting 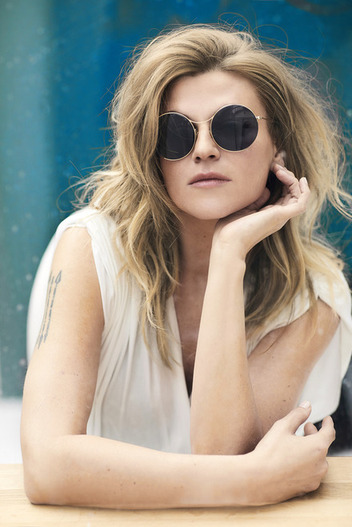 Combining a soft, sensuous, silky purr with a tremulous vibrato, Melody Gardot’s voice is distinctive enough to be instantly recognisable; it’s a rare quality these days and puts her in that elite cadre of chanteuses that includes such legendary figures as Billie Holiday, Ella Fitzgerald, Sarah Vaughan and Astrud Gilberto. It may be early days yet – Gardot is still only 35 – but on the evidence of the five studio albums she’s delivered thus far, the singer originally from Philadelphia who now lives in Paris is writing herself into the pages of jazz history.

As the lush musical canvas of her latest long-player, the 13-track ‘Sunset In The Blue,’ reveals with its iridescent fusion of jazz, pop and Latin styles, Gardot occupies a unique niche; she can bring a fresh but timeless interpretation to well-worn jazz standards like ‘Moon River’ and ‘I Fall In Love Too Easily’ but also writes many of her own songs, some of which – like ‘If You Love Me’ and ‘From Paris With Love’ – sound like future standards.

But due to the Covid-19 pandemic, the birth of what became ‘Sunset In The Blue’ was not an easy one. “We set out in January 2020 to begin demos and recordings of this album hoping we would finalise in the spring,” the singer explains. “Mid-way through that process, however, all operations had come to a grinding halt.”

Despite the restrictions that lockdown and social distancing brought, Gardot felt an impulse to persist with completing the album; even if it altered the way she approached recording. “We decided to push forward,” she says, “and continue to find a way to make music despite these trying times – and it was in that moment that we discovered great beauty.”

The old adage about necessity being the mother of invention rang true for the American singer. One of the songs she had written for the project, the poignant, richly orchestrated ballad, ‘From Paris With Love,’ became the catalyst that sparked a new approach to making music. “The song took new life, serving as a beacon of light in dark times,” she reveals with pride. “It offered a chance to break the mould in terms of how we create music and also provide a number of musicians the opportunity to work, maintaining their livelihood as performers.”

In a “eureka” light bulb moment, Gardot, locked down in the “City of Light,” recorded the single ‘From Paris With Love’ in May by using social media to make contact with string players, who formed a virtual orchestra and recorded their parts separately. Some of them appeared in her promotional video for the song, which also included footage submitted by several of the singer’s quarantined fans around the world. Its theme is that love and togetherness can be a transcendent, unifying force in challenging times; and the sense of distance and isolation we’ve all felt has only served to emphasise our need for closeness and kinship with one another.

“We managed to bring the gesture of connection full circle by donating – with Universal and myself – our respective royalties of this song to a charity for healthcare workers,” says Gardot. “We did what we could with what we had.”

The sense of achievement that Gardot felt after completing ‘From Paris With Love’ propelled the album project with greater momentum. “I felt incredibly inspired to keep searching for a way to make music and keep musicians working,” she says. “Our team worked nonstop in that moment until we were graced by the presence of the Royal Philharmonic Orchestra at Abbey Road to help us finalise the remaining recordings at distance.”

The Abbey Road recording in June was remarkable as it was the first Covid-safe studio session in the world. “Absolutely fantastic,” is how Gardot recalls the experience. “(It was) incredible to be able to do this long distance. These musicians are just stellar. A fabulous cast involved on all sides, from the team at Abbey Road, to conductor Cliff Masterson, and arranger Vince Mendoza. It was something out of a dream.”

The new album reunites Gardot with Larry Klein (pictured left), who began his career as a jazz bassist before becoming a Grammy-winning record producer whose forte is working with female artists (which include Joni Mitchell, Tracy Chapman and Madeleine Peyroux). His first collaboration with Gardot was on her second album, 2009’s Grammy-nominated ‘My One & Only Thrill,’ which went both platinum and gold in various countries around the world and established the then 24-year-old singer as a global star. Klein worked with her again in 2015 on the singer’s last studio album, ‘Currency Of Man.’ “Larry and I jokingly say we’re like an old couple,” laughs Gardot. “We’ve known each other for many years, and we have a certain way of working where we set out with an idea but then tend to turn it on its head, neither of us knowing really where the road of reinvention will lead us. It’s a free-flowing palette in terms of creation; a bit of a compromise as much as a surprise.”

Orchestrator, Vince Mendoza (right), had also worked with the singer before on the album projects that were helmed by Klein. “Vince is a phenomenal arranger and conductor,” Gardot gushes. “It was a pleasure to have him on board. Most admirable was his willingness to help us create the backdrop of ‘From Paris with Love’ with a global digital orchestra in tow. Not an easy feat by any means.”

Completing the holy trinity behind ‘Sunset In The Blue’ is veteran studio engineer Al Schmitt, now 90 (pictured below with Melody), who’s a long-time associate of the late producer Tommy LiPuma. According to Gardot, his expertise was crucial to the sound of the album.  “It doesn’t get any better than Al,” she states. “Just in terms of recording live sounds – his drum sound alone can make you lean into the speakers to get a closer glimpse of what has been captured.”

She adds: “He’s a genius in his own right. If you search quickly the projects he has worked on you would understand. In his most recent book, he even shows how he placed the mics to capture artists like Bob Dylan and Sinatra.”

The experienced triumvirate of Klein, Mendoza and Schmitt conspire to frame Gardot’s voice with a host of impeccably elegant musical backdrops. Stylistically, the album is radically different from her previous opus, 2015’s Currency Of Man, which had more of a retro-soul ambience.  “In terms of style, I had wanted to return to something more feminine and sensual, as we had been developing this sound the two years prior while on tour,” says the singer, explaining her return to her jazz roots. “Quite simply, I felt it was time to take that energy and that more orchestrated approach to the studio.”

The mood is generally downbeat – but not downcast –  and among its numerous highlights is the languorous ballad, “If You Love Me,” featuring noted German flugelhorn player, Till Bronner (right). It’s the album’s tone-setting opening cut and the first of eight songs that the singer either wrote or co-composed on an album that she says was inspired by love.

One of her original songs, ‘Ave Maria’ – not to be confused with the well-known Schubert piece with the same name – finds Gardot’s sublime vocals augmented by Mendoza’s cinematic orchestral touches. With its poetical lyrics, the song highlights the Grammy-nominated singer/songwriter’s skill as a storyteller. “This album focuses on all aspects of love, and I wanted to take that one step further with ‘Ave Maria,'” she discloses.  “Here we discover a young woman about to enter the convent, where she is questioning the love she’s been explained that she must have for an otherwise ‘invisible’ being.”

“There is no political or religious statement behind it,” she explains further: “It’s just one moment imagined as a young woman looks at the path before her, about to give her hand in marriage to someone she cannot see. She hears the people singing ‘Ave Maria,’ and begins to wonder… ‘Ave Maria…what does this all really mean?'”

The album’s romantic ambience is further enhanced by carefully selected covers, including a revamp of English folk singer Lesley Duncan’s minor UK hit, ‘Love Song,’ which was also recorded in the early 1970s by jazz singer Peggy Lee. “Larry Klein suggested the song to me and I fell in love with her writing style on this tune,” says Gardot. “It stood out as a beautiful piece to reinvent.”

Those who are familiar with the singer’s third album, 2012’s ‘The Absence,’ will know that Melody Gardot has a passion for Brazilian bossa novas and Mediterranean music. Her musical love affair with Latin grooves and moods is in evidence on ‘C’est Magnifique,’ a smouldering duet with the mellow-voiced crooner,  Antonio Zambujo (left).  “Antonio is a fantastic singer and artist from Portugal, who I had been listening to and admiring for many years,” enthuses Gardot. “His voice is just perfect for the song and I am very grateful to have the opportunity to sing with him.”

The album contains another duet with a more high profile participant; Sting. The ex-Police singer appears on the set’s final song, a bonus track called ‘Little Something.’ “It was surreal and groundbreaking, in the sense that I never imagined it possible to create a duet long distance,” exclaims Gardot. “The track was brought to me by French producer, Jen Jis. It was then recorded while in quarantine and released early September. Up until that point, I had never met Sting; we only met through the music. It’s quite funny, but beautiful in a way to work like this; all that mattered was the music.”

The album’s overall mood is captured by its extraordinary and eye-catching abstract artwork. “The album cover is a painting by the (American) artist Pat Steir (pictured below, right),” Gardot divulges. “She is an incredible artist. The work is called Untitled IX, 2019 (Taipei). Her work is held in the permanent collections of the Fondation Cartier, Paris; Louvre, Paris; the Metropolitan Museum of Art, New York; The Museum of Modern Art, New York; Tate Gallery, London and many more.”

Gardot says she decided to showcase Steir’s work to show solidarity with other creative people whose livelihood has been affected by the pandemic. “While there is a deafening silence in the arts at this moment, I think it is more important than ever that we seek opportunities to support each other in any way we can,” she says. “The choice to use her piece – which I love – as a cover is as much symbolic as it is heartfelt. In the absence of any galleries being open due to Covid, I wanted to provide an outlet with this cover for an artist to be showcased to the world. This is the first time her work has been reproduced anywhere.”

Reflecting on her life in music thus far, Melody Gardot says her first time recording in Hollywood’s Capitol Studios back in 2008 stands out as a highlight but one of the most memorable moments of her career has been today in 2020 with the making of ‘Sunset In The Blue.’  “This album holds a special place in my heart,” she confesses, “because although it sounds quite mellow and sensuous, there is a massive amount of sweat and hard work within it by all parties involved.”