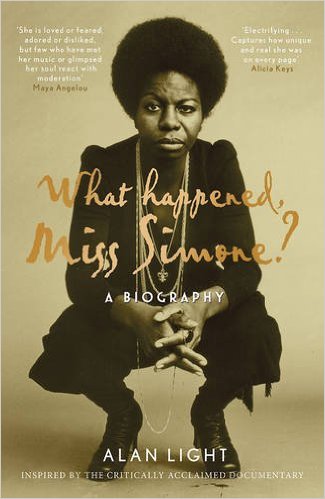 It only came to light recently that Nina Simone suffered from bipolar disorder, which for those that knew or worked with the singer, went some way, perhaps, to explaining her abrupt and inexplicable mood swings and seeming emotional instability. Indeed, Simone, is generally perceived as a deeply troubled and volatile character who was not only fighting against the racism and sexism that confronted her every day as she strove to forge a singing career but also battling with her own inner demons. Appearing imperiously strong one moment and yet vulnerable and helpless the next, she was defined, it seems, by contradictions.

She was, then, a complex character and though she died thirteen years ago, her music and life continues to exert a fascination for the public. Her life has been the subject of three films recently – one is a movie called Nina with Zoe Saldana cast as the singer – which has engendered controversy due to its casting and purported inaccuracies – while the other two, What Happened, Miss Simone?, and The Amazing Nina Simone, are both documentaries. Following in the wake of those comes a new biography of the North Carolina singer by Alan Light, whose book, What Happened, Miss Simone? A Biography is a tie-in with the recent acclaimed documentary of the same name.

The author, who’s also written books on Prince and Motown, recently talked about his latest project with SJF’s US writer, John Wisniewski…

Why did you decide to write a biography of singer Nina Simone?

Well, this one wasn’t so much my “decision” as the other books I’ve written – this one came about a little bit unusually. The folks who made the “What Happened, Miss Simone?” documentary saw that their film was getting some attention and traction early last year (which of course culminated in an Oscar nomination). I think they realized that they had assembled years’ worth of research, and that – as with most documentaries – only a small fraction of their material actually made it to the screen. So they had the idea of finding a way to use all of that stuff for those people who wanted to look deeper at Nina’s story, at which point they approached me about writing a book using the material they had gathered. So I was essentially given all of the interviews/archives/diaries/etc from which they made the movie, and went off to turn it into a more complete biography than could be fit into 90 minutes on screen. It was a bit inside-out from the ordinary process of writing a book, but it certainly gave me access to things that no biographer starting cold on the project would ever have.

Why did Nina choose to become an civil rights activist, as well as a dynamic performer?

I think that she felt the calling, and she was driven by her passions. Nina spent her youth training and studying intensely with the goal of becoming the first great black female classical pianist. When that goal did not ultimately work out, I think she spent a while feeling adrift and, though she started to become successful as a singer and recording artist, she felt a bit lost without a purpose. She was aware but not involved in the civil rights movement when a black church in Birmingham was bombed in 1963, and four young girls were killed. Perhaps because her own daughter was around the same age, this event hit Nina hard and galvanized her as an activist; it was after the bombing that she wrote “Mississippi Goddam,” and started to truly devote herself to the protest movement.  I think her power as a performer came from that same place of passion and absolute commitment. The difficult thing for her as a performer was that she was raised with the sensibility of a classical/”high-art” artist, so she expected – no, she demanded the total attention and respect of her audience, which wasn’t always so easy to get in a nightclub or music festival setting. So from early on, she wasn’t shy about waiting for silence or storming off stage or confronting her audience if she felt they were not sufficiently quiet and focused. But the other side of that is that when she played, she was completely and entirely there, and performing exactly what she wanted, without compromising or watering anything down.

What research went into writing the book?

The hardest thing was working with research that others had done, and realizing that I was really dealing with history rather than journalism. I had to do a lot of connecting the dots to create a consistent and reliable chronology…I was working with a lot of interviews that weren’t done for this kind of purpose, so determining exactly when and where certain events happened, or whose version of a story was reliable (or which parts of which stories) was really what took the bulk of my own research, rather than trying to gather more information or sources. Honestly, I was on a tight deadline – we needed to have the book out while the film was still active, ahead of awards season – so my job was extending and smoothing out a narrative using the incredible material I had, instead of finding more primary interviews/documents to work with.

What was Nina’s finest moment?

Of course, it’s hard to distil such a long and wide-ranging career down to a single moment. I guess if forced to choose, I’d pick the time (or two) when she really created something unprecedented in response to a moment in history – most notably, writing ‘Mississippi Goddam’ immediately following the bombing that killed four young girls in Alabama…she had never really written a song before, but drew on this emotional reaction to produce this remarkable composition, and really staked out new territory in protest music. Kind of similar, but not the same, was her creation of the song ‘Why? (The King of Love is Dead)’ following the assassination of Dr. Martin Luther King, Jr. Nina had a complicated relationship with King’s non-violent philosophy – she believed in more active resistance and action – but her pain and agony at this loss of this great leader is so palpable in the song, and she found this incredible way to make his death resonate and to give voice to a confusion and fury that black America was feeling at that exact moment.

What will your next book be about, Alan? (pictured left)

Too soon to answer. I’m in conversation with another estate about a possible project that would be great, but we’re not there yet…

What was your opinion of the big screen biopic on Nina Simone?

If you mean the feature film with Zoe Saldana, I haven’t seen it. I’m certainly curious, after all of the controversy, to see what it actually is, though it seems like it’s never really had a chance.

Do you enjoy writing biographies?

This was very different for me. I guess each of my books have taken a different approach to telling a story about music: Gregg Allman’s book was obviously about capturing his voice and helping him to tell his own story; the Hallelujah book was an examination of a very focused subject (a single song) and tracing its history; the Purple Rain book looked at a particular project and moment – the making of the album/movie/tour – and considering its impact; and the Nina book was a full biography, looking over her full 70 years. It was a different kind of challenge for me to try to capture such a complex life, often problematic and diffuse, and look at it thoroughly, honestly, and fairly. My job with this book felt much more like being a historian than being a journalist – which was a little scary for me, but also exciting. I learned a lot, about Nina but also about writing.