FACING THE THIRD DEGREE – VALERIE HOLIDAY CONFESSES ALL TO SJF 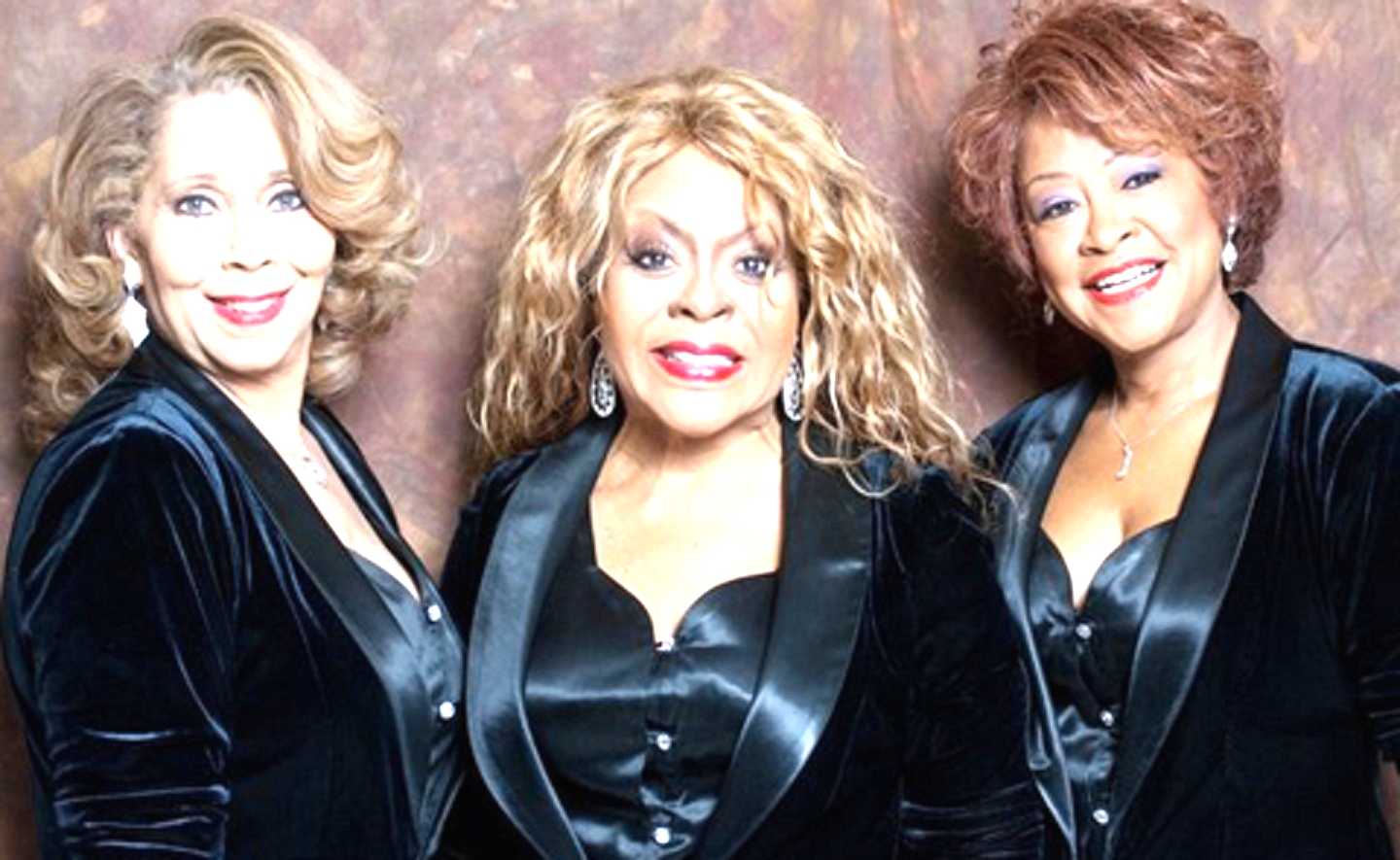 “That was mind-blowing,” exclaims Valerie Holiday (pictured far right), the longest-serving member of the legendary vocal trio, THE THREE DEGREES, who married supper club glitz and glamour with sweet soul grooves. The Boston-born singer, who has been with the group since 1967, is recalling the time that the group performed in front of British royalty – Prince Charles no less, who was celebrating his thirtieth birthday at the time – in 1978. “We were invited to Buckingham Palace for the announcement of his marriage to Princess Diana,” continues Valerie. “It was quite exciting. I had to keep pinching myself to make sure I was awake in there because it was nothing but dignitaries, so it made us feel very, very special.”

Indeed, the group – which recently celebrated half-a-century together and have been officially recognised by the Guinness Book Of Records as the longest-running girl-group of all time – have enjoyed a ‘special’ relationship with not only British royalty but also the British public for forty years. Their enduring popularity means that they’re no strangers to this sceptered isle and to prove the point, the group are set to undertake a lengthy UK tour later this month. Their itinerary, which comprises twenty dates, includes performances scheduled as far north as Wakefield and as far south as Exeter and Weymouth.

(pictured in the ’70s, Valerie on the far right)

You’ve got a long tour scheduled for the UK later this month.

Yes, we haven’t done this much in some time. We usually come over and do maybe four or five dates and that’s about it.

What can your English fans expect from you on this tour?

Of course they’re going to hear all the favourites that I’m hoping they want to hear. You try to do as many of the records as you can without making it the entire show, because then it doesn’t give you a chance to have a little variety in there. So, they’re going to hear the hit records, of course, and some other things that we put in to spice it up.

Of all the places you have visited in the world, how important has the UK been to you as a group?

The UK opened up its arms to us very early in our career at the very beginning. We received most of our gold records from the UK and so it was a very pivotal point for the group and we’ve enjoyed the relationship for all these years.

Yes, it’s been a sort of long-running romance, hasn’t it?

It has, and the wonderful thing about it is that because the show is not geared to a particular age set it has a wide appeal. Whether you’re small or whether you’re old you’re going to enjoy the songs. We’ve always loved involving the audience in the show, that’s very important. It’s no good for you to come and just sit and watch: you need to come and get involved, so it makes it more fun in the end.

(When the The Three Degrees met Prince Charles)

Going back to the 1970s, how did it feel to be endorsed by none other than Prince Charles, who was quoted as saying that The Three Degrees was his favourite group?

(Laughs). That was fantastic. You felt very special because unlike our president that we vote in every so many years, this is a family that has been there since I don’t know when (laughs). The press dubbed us ‘Charlie’s Angels’ and he did say that we were his favourite group at that time. We’re hoping we still have that same love and relationship going on even though we’ve not had the opportunity to see each other.

Do you recall your first trip to England?

Oh my gosh, yes, I think it was at the very, very beginning of the Philly era because we came over once and I remember getting off the plane and our manager at the time made us don a Paul Revere-type outfit. We put on a three cornered hat and short pants with stockings. We went to Buckingham Palace to present the Queen with the Liberty Bell. Being an American, of course, our manager thought that we could just ride up to the gate and they’d let us right in (laughs raucously).

What was your impression of England? It must have seemed a world away back in those days from Philadelphia…

What was your experience of the food? Because the quality of the food back in the UK in those days wasn’t supposed to be very good…

Well, now, we won’t talk about the food (laughs). But I love fish and chips so there you could not go wrong. (Laughs). And since then I’ve come to love the Sunday roast dinners, yes, so I kind of got into that.

How does it feel to be a member of the longest running girl group in history?

I have to say that I keep saying to myself I’m not that old! (laughs) It feels wonderful to have been blessed to have a career that has spanned this length of time and of course we’ve had our little ups and downs and being able to survive those was a good thing.

I did. At that time we were all still in high school and trying to figure out who we wanted to be and what we wanted to do so in the beginning there was just like a process of trying to find the right person. Sometimes I read articles and they say this is a group that is comprised of eighteen or nineteen people…. but I say no, no, no, there were not that many people. What you have to take into consideration is that it’s like a job. You go in to an interview and if you fit the bill you get the job. If you don’t then you don’t get the job. So we had quite a few people coming in to see if that was a good marriage and if it turned out not to be then, therefore, they didn’t hold the position. In my mind I only count the Degrees that came in and stayed and made a contribution.

And you’ve stayed longer than most, haven’t you?

(Laughs raucously). I got stuck here, you know.

What circumstances led you to join the group in the first place?

Oh my gosh. They were performing in my home town of Boston, Massachusetts. At the time I was a solo artist and a friend, a keyboard player, knew a friend of (the group’s manager) Richard Barrett and knew that they were looking for a replacement for one of the ladies that was there. Sonia Goring was her name. She was a member of the Chantals and they were not working at that particular time so she agreed to step in until they could find somebody permanent. I think Janet Harman had just become ill or something had happened and she left and so Sonia stepped in so they could continue fulfilling their obligations. So I came to see the show when Sonia was there. I went backstage and we chatted and it felt like a good vibe. I was asked if I would be interested in joining the group and initially I felt like no, but then thought okay, maybe this will be fun because in the business being that young you don’t really want to be by yourself. My mother wasn’t too happy about me being on my own and neither was I. So this gave me the opportunity to have company and so it made it feel a lot better.

Richard Barrett was your manager back then. What was he like to work with?

Oh, a tyrant (laughs). He was a tyrant, yes, but we were thankful for him because I think without that early learning I don’t know if we would have still been here today. He sort of solidified the thought that you had to be able to perform. It was all well and good having a hit record but once you performed that hit record then what were you going to do? So we started out learning how to entertain an audience first. He would pick some of the most off-the-wall songs. We could not figure it out. At that time we did Nancy Sinatra’s ‘These Boots Are Made for Walking,’ ‘Bonnie and Clyde’ (by Georgie Fame), ‘Brother, Can You Spare a Dime’… Those were in our set at the time. His idea was to make us as unique as possible so that the comparison with three other black female groups would end right there. So you had an act of three people that could actually perform as individuals and could perform collectively.

You sang lead on the group’s first US hit, ‘Maybe,’ in 1970. How did it feel to finally get a hit single under your belt?

It was good. Like I said, we have been working already. It didn’t change very much for us at that time because we had been performing at places like the Copacabana and all the major rooms in the United States. So when the record came out we were already performers; we were in Vegas, and California, at the Greek Theatre. But when we signed with Philadelphia International it gave us the opportunity then to branch out.