EXPOSING HERSELF – Jazz FM award winner Esperanza Spalding talks about creation, the significance of numbers, and the challenges of being an artist in a capitalist society. 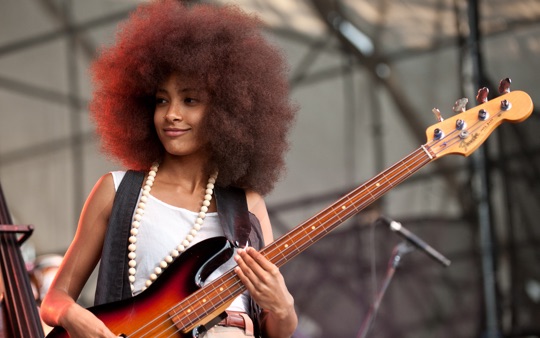 Esperanza Spalding is clearly enjoying herself. She’s laughing, posing for photos with friends and musical colleagues – among them Omar and Pat Metheny – while clutching a glass of champagne in one hand and a prestigious Jazz FM award (presented to her by Corinne Bailey Rae) in the other. She deservedly triumphed in the category of Digital Initiative Of The Year,  which acknowledged her innovation with the brilliant, groundbreaking album, ‘Exposure,’ released in 2017.

Living up to its title, ‘Exposure’ set the 33-year-old bassist/composer/singer from Portland, Oregon,  the somewhat daunting task of making an album from scratch in 77 hours, while the whole session and creative process was streamed live on social media.  The resulting album, an astonishing double disc set, was released exclusively on Esperanza’s website in a limited edition run of 7,700 copies and sold out within hours.  SJF’s Charles Waring managed to grab a few minutes with the super-talented musical polymath before the champagne really kicked in and reduced her to a fit of giggles…

Were you expecting to win or were you surprised?

I was not supposed be expecting it but I figured they wouldn’t fly me out here if I wasn’t going to get something. But this is really stunning. I was totally messed up. I was so overwhelmed. But who cares? I’m enjoying the champagne. (laughs)

Where did the idea for ‘Exposure’ come from?

I wanted to expose who I am as a creator and I wanted to explore a new method of creating. It’s kind of like how we improvise, where we use everything that happens and then you use whatever happens as a springboard to the next musical event, the next musical moment. Personally, I stumbled upon the revelation that not being able to stop and turn back yielded, for me anyway, a more concentrated music because whatever ended up staying in the song was closest to the original hit of inspiration, like closest to the germ of the idea, so everything that grew out of that germ was most in tune and most reflective of the original idea.

You were trying to keep the purity of it?

Yeah. We don’t know what inspiration is yet and maybe we never well. It may be just the combination of memories and experiences in our subconscious and it may be from other energies beyond us. But whatever it is, when it hits you and it’s strong you want to create. It’s something that is more powerful the less we practice, I guess, and I notice that magic can be diluted the longer I work on something (laughs).

The longer you play something,  the easier it is lose the original spontaneity of it, I guess?

Yeah, totally. It also reflected where I’m at in my life. I just felt like, I don’t want any dressing on this. I want people to see exactly who I am, exactly what I’m about, exactly what I sound like, and f start a relationship with me as a creator, kind of from scratch, in a way.

Hence the title, ‘Exposure,’ I suppose.

Yeah, ’cause there’s no room for a PR story on that thing or any dressing because you’re seeing what the hell it is that emerges…

Did you feel added pressure by streaming it live on social media?

Why did you choose to record it in seventy-seven hours? What was the significance of that number?

Well, I had to pick some numbers right? I had to decide how many hours we were going to be in there (laughs). But it was significant. Every place I could choose a number, I chose the number seven because it was explained to me by this reverend that I ran into in an elevator, though I’m not particularly Christian per se. We were going to the seventh floor,  and he said ‘ah, seven, that’s a divine number.’ I asked him why it was divine and he said ‘well, it’s divine because it presents the completion in the tangible world of divine inspiration.’ I thought, shit! And then seven started coming up more as this strong number, and from what I understand, it represents completion, and in a way completion is kind of a new beginning: like the meeting point of an ending and a beginning, and all that potentiality right there. So completion as being a new starting point, so, I wanted to be imbued with that number and energy.

What did you learn about yourself and music doing this project?

The music industry does not have a place for me (laughs). The guy that just received an award with me (Gisle Johnsen, of the interactive music platform, oiid) was the first person that I ever met in the music industry who said, ‘What’s the idea? It makes sense, I’ll support it’ (laughs). And then we figured out a way for it to be helpful to his vision but he just saw the potential and believed in me as a creative person and said ‘yes, let’s make this happen.’ But with everybody else involved, as wonderful as they are, it was like pulling teeth the whole time. It was really challenging. Understandably, this project  was not a lucrative endeavour, so I appreciate that.

What about your record label, Concord? Were they supportive?

They came around, they’re cool. It’s a different paradigm, though, because they’re running a business and I’m not. I realised actually, after that, ‘oh shit, I am not a business person.’ I want to make things, and I want to try things that may fail. And we may lose money and lose our minds, and that’s the only way I can be.  So that was like the big takeaway. I though, ‘I need to set up an infrastructure because there has to be a different model.’ (laughs).

Don’t forget you established a new paradigm with ‘Exposure.’

Well, on the business and administration side, I was like, what are the options for sustainable productivity in art, where you also don’t have to feel  beholden to getting your money back? (Laughs).

But the album must have sold out within a couple of hours.

Yeah, but to treat people right, it’s expensive, though it was fun. It was literally about the adventure. And that was such an f****** adventure. I’m so happy with the final result and like you said, what did I learn? Oh my God, it was priceless, the education was priceless. I learned so much… like who my real allies are, and who the medium allies are, and who the non-allies are. My eyes are now set on what are models of artistic productivity and artistic distribution that are not dependent on a capitalistic system, where you have to generate surplus of capital to justify the creation of the art. I can’t live with that anymore.

Do you think you’ll go the independent route?

I kind of already am. I’m independent, I have a licensing deal. But I don’t even know what that word means because I’m totally dependent on others. Actually, I think it would be really amazing and truly transformative to find a hybrid model where business and artists could support each other,  and whatever it is that we have to generate is supportive to the business structures, which are in their own way, really incredible. It’s not like there’s nothing to learn from capitalist business structures but what I’m doing is like scientific research and you can’t only be researching things that have guaranteed economic benefit. That makes no sense. We probably wouldn’t be alive if that was the case, particularly in medicine, right? It’s kind of like finding the sweet spot between the supported exploration and  accountability, of making sure that you’re being responsible with your capital.

Don’t you think that ‘Exposure’ could open up a new avenue for dialogue between the business people and the creative people?

Creatively, where do you go after making an album like ‘Exposure?’

I’m continuing to work on this opera that Wayne Shorter is writing. We’ve been working on it for about four years (laughs). We have one year and a half now to go until the premiere, but it’s totally satiating. I was just here over the weekend working with Penny Woolcock, she’s the director. She’s directed Dr Atomic and other things. And then there’s this other project I’m doing but we just need a lot of time.

I don’t thing I can even describe it. You know sometimes on a big bookshelf, you have those ebony carved heads that are the bookends on either end? This is like taking all the books away and then putting the ebony heads on the same shelf and turning them to face each other. Just like that. (Laughs)

I’m trying to imagine what that is in musical terms.

Yeah, me too. I’m trying to imagine it, but it’s just like that. (laughs)