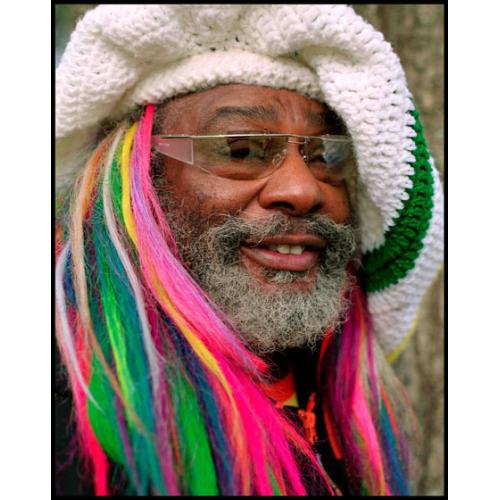 Funk was never the same after GEORGE CLINTON got his hands on it. James Brown and Sly Stone might have been the idiom’s original architects in the late ’60s but Clinton brought a sense of humour and outlandish, tripped-out, wackiness to the genre with his twin bands, FUNKADELIC and PARLIAMENT in the 1970s. Funkadelic was a mind-blowing aggregation that melded funk with lysergic Hendrix-style rock while Parliament was a more radio-friendly R&B-oriented outfit whose back catalogue gave hip-hop some of its greatest sampled grooves. Regarded by some as something of an eccentric maverick – and by others as a musical genius and revolutionary whose influence on other musicians has been profound – Clinton is 72 now and still ‘tearing the roof of the sucker’ with a 21st century incarnation of his Parliament-Funkadelic axis. The P-Funk auteur rarely gives interviews these days but fortunately for SJF, US-based musician/writer, PHILIP PETERSEN, was recently granted an audience with the North Carolina-born funk icon after a show at Avondale Brewery in Birmingham, Alabama…

I’m not going to lie; I was jumping out of my skin. It is not every day that you can get within a few feet of one of your musical idols, much less be granted an opportunity to interview that idol. When I found out George Clinton & Parliament/Funkadelic were playing at Avondale Brewery in Birmingham, AL, I had to ask for an interview. I was shocked to be granted an audience.

I researched, asked friends and listeners what they would like to know, struggled to come up with a concise list of topics to discuss. I got to the show early…and I wasn’t on the list. The P-Funk team, however, is an excellent crew. After showing some people the email exchanges between myself and George’s publicity team, I entered the scene and waited. Originally set to interview George before the show, I tried to calm my nerves while I waited. For several reasons, the interview got moved to after the show, which allowed me to roam the venue and talk to people there. I got to know Glenn, the “Merchandise Guy” well enough to earn me a signed flyer that happened to be in the bottom of a t-shirt box. Score 1. And I wondered if I would have to wait till 5 AM for the interview, as George Clinton and P-Funk are legendary for the length of their shows.

We conducted the interview in the bar of the hotel where the band was staying. I asked George if I could record the interview. After receiving permission, I set up two recording devices, informing George that I was pretty set on redundancy, having much experience with equipment problems. In fact, the band’s show started off the evening with technical difficulties on Michael “Kidd Funkadelic” Hampton’s guitar rig, necessitating some improvisational music while the crew worked on the problem. I doubt most people in the audience even noticed. As it turned out, the most expensive digital recorder I brought did not record anything…. The low tech recorder got it all.

The bartender came over to the table and asked George what he would like to have. “A glass of Malbec,” he replied. Malbec happens to be my favorite red wine; I took it as a good sign. But when the bartender placed the glass in front of him, I had a flash thought that this interview was going to last as long as it took for George to drink that glass. Time to get it on.

I referred to George’s interview with CNN in 2011, and I relayed a statement he made in that interview to him; “It took all of us to do it…. When I learned to play whatever role I needed to play…When I learned we could be back-up singers to our back-up band,” he stated in that interview. I asked him if he still believed in that statement. “You be whatever you have to be,” he replied. “That’s what funk is. Whatever you need to be to save your life….We was all the same family, we all came out there together. So all we had to do was get our egos out of the way….That was always my job, to bridge that shit.” George Clinton has been referred to as the “Funk Conductor” in other interviews of band members. George is as much “The Facilitator of Funk” as he is a performer in the studio, and on stage.

George Clinton’s role as “Funk Conductor” was readily apparent on stage this night. Singing when he wanted to, backing other members at other times, disappearing from the stage at times, George Clinton lives the statement he made. George Clinton is family, and he encourages his family to shine.

I then asked George about his interview on “Space Ghost Coast To Coast”…. After a good laugh, I asked if he knew how that was going to work. “They told me about how it worked, that’s how I was able to blow him off,” he replied. “I made up shit that he couldn’t get out of…. They told me they couldn’t use half the stuff I said because it ruined the show.”

I also asked George about his donation of The Mothership, formerly residing in his Tallahassee home, to The Smithsonian and whether he had visited it, there. He let me know about the current construction of the African American History and Culture Museum wing of the Institution, and how The Mothership would be in residence with artifacts of the Tuskegee Airmen, the famous African-American P-51 pilots of WWII fame. I find this combination to be so entirely appropriate. The Smithsonian also has possession of much of the paperwork, concerning George Clinton and Parliament/Funkadelic.

Early in the set, the band launched into ‘Flashlight,’ the oft sampled, 1978 single that hit #1 on the R&B charts and #16 on the Pop charts. I told George that particular song had inspired me, and I asked him if any particular song or album had inspired him to do or write anything. “Lots of them,” he immediately replied. “The Beatles’ ‘Yellow Submarine’; that always inspires me when I get to playin’. Sly’s (Stone) stuff…Curtis Mayfield, all that. You know I worked at Motown. But when I want to get inspired, I always listen to the Beatles shit. That’ll always wake your ass up.” George Clinton’s love of the Beatles is well known, and he has stated in past interviews how it totally changed some of the ways he made and performed music. “And then, you know, whatever the music happenin’ that is up to date…the music that people hate, that’s the music I listen to. The music that you say, ‘That ain’t shit’, that’s what I’m listenin’ to.”

I had asked our listeners to send in statements about why they like funk music. I relayed the best ones to George. One, in particular, got a deep laugh; “No matter how much you drink, you can’t two-step to it.” I asked George if he could tell me why he likes performing and writing the music he makes. “The Nasty Groove,” he stated. I asked if you needed to be or feel anything in particular to like or “get” funk music. “Nah. I mean,…. it be… it helps if you’re fucked up. It helps when you’re fucked up, but you don’t have to be.” He continued, “It’s like fuckin’. You just get caught up in it…when that groove catches your ass.” Indeed, you do…

I had also asked our listeners to send in questions they would like to ask George Clinton, and I presented a few to him. When are you going to retire? “I’m gonna retire when I start going to work,” he answered. Does playing music feel like work to you? “that’s playin’….that’s playin’,” he said. Does the business side of it all feel like work to you? “It gives me something to work hard for. ‘Cause you have to fight on the business side. It keeps your ass awake,” he replied. George Clinton’s trials and tribulations with record companies is well known. Indeed, it shaped the whole development of the funk conglomeration that is George Clinton & Parliament/Funkadelic.

I saved this next question for the end of the interview. I, and many of our listeners, wanted to hear George Clinton, himself, inform us as to what inspired ‘Maggot Brain,’ the 1971 song based on guitarist Eddie Hazel’s mind-bending guitar solo. “All the bullshit that we feed our mind,” he immediately replied. “And we have to use that to get us out of trouble. THAT’S the instrument that’s fucked up. All of that, that psychological bullshit, the chemical bullshit….you know, commercial…that’s what you have to use to protect yourself, and it’s got maggots in it. That’s the thing we got to clean out. We got to start exercising our brain. THINK: it ain’t illegal, yet.” It was certainly an honor to see Michael Hampton blaze through the song, as he has done for many years, now.

As it turns out, he had just finished that glass of Malbec.

May The Funk be with you.

Philip Petersen is a musician and journalist who practices law to pay his bills. He also runs a blog on Facebook called “105.5 The Funk.”