DUKE FAKIR OF THE FOUR TOPS SPEAKS AHEAD OF THEIR 2014 UK TOUR! 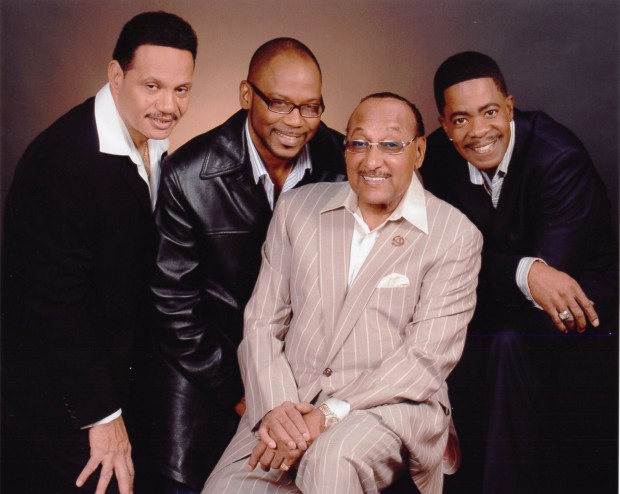 It’s sixty years this year since the Four Tops, without doubt one of the greatest vocal groups that the world has ever heard, were formed in Detroit, Michigan. Founder members Levi Stubbs, Abdul ‘Duke’ Fakir, Renaldo ‘Obie’ Benson and Lawrence Payton were four high school buddies who came together to make music initially under the name, the Four Aims. But it was another ten years before they tasted the big time. In their first decade together they performed myriad gigs – which allowed then to hone their harmonies to perfection – and released the occasional single (for Chess, Columbia and Riverside). But in 1963 they were offered a life-changing record deal by up-and-coming Detroit label, Motown.

From 1964 onwards, the group racked up a welter of memorable smashes for Berry Gordy’s now iconic record label – among them the US chart toppers ‘I Can’t Help Myself’ in ’65 and  ‘Reach Out I’ll Be There’ in ’66 (which also has the distinction of being the group’s only #1 single in the UK). In ’72, they quit Motown for Dunhill/ABC. The hits continued to flow – ‘Ain’t No Woman (Like The One I’ve Got)’ was their biggest smash for the label – and in 1981, they moved to Casablanca where they experienced their first US R&B chart topper since 1966 in the shape of ‘When She Was My Girl.’ They eventually wound back at Motown in 1983 but it wasn’t the homecoming that they had hoped for and after a disappointing second spell at the label, the Four Tops were signed by Arista in 1988 and scored a Top 10 UK smash with ‘Going Loco In Acapulco.’ Amazingly, the group’s line up had remained the same since 1953 and it wasn’t until Lawrence Payton passed away in 1997, that they recruited a new member. The deaths of ‘Obie’ Benson (in 2005) and Levi Stubbs (in 2008), has left Duke Fakir, now 77, as the only surviving original member but he continues to keep the legendary quartet’s legacy alive with a new incarnation of the Four Tops, which comprises Lawrence Payton Jr, Ronnie McNeir, and Harold ‘Spike’ Bonhart.

In March and April 2014 Fakir is bringing the Four Tops to the UK for a keenly-anticipated tour that finds them performing ten concerts in all. The Tops will be sharing the bill with fellow Motown veterans, The Temptations, plus The Platters and Freda Payne. SJF’s Charles Waring recently caught up with the amiable Duke Fakir, who talks about his appreciation of the Four Tops’ loyal UK fans, as well as recalling key junctures in the legendary group’s illustrious history…

What can Four Tops’ fans expect to hear from you in March and April next year?

Well, what you expect to hear is what you always will hear: 90% of our songs will be the favourites that you all like, that we like – what we call our top golden hits – and we also have the same energy that we usually have because we’re with our greatest competitors, The Temptations, which allows our vocalists to be in our A-game all the time. You can’t mess around and go through the motions, especially with a show like this, and especially with The Temptations. I’m also looking forward to being with The Platters. I haven’t seen them for a long time. We admired all their songs when we were coming up before we had hit records and Freda Payne, we’ve been working with her well before we both had hit records. We played with her in jazz clubs in our earlier days in theatres with Billy Eckstine and there’s a great relationship there and it’s just really going to be great show. I’m looking forward to it, as we always do. The only thing about it is that I wish we could come (to the UK) every year and not every other year. We’re really blessed. It’s the greatest tour that we do during the whole year. It’s the love and the appreciation and the graciousness that they all accept us with. It’s mostly overwhelming and I’m on a 10-12 day high of love and appreciation while I’m there. It’s a great feeling.

The Four Tops have had a lot of chart success in the UK over the years – why do you think that the group has connected so well with the British people?

It’s hard for me to say why. First of all, I think they like the music and I think that they like the camaraderie, the friendship, which we have together. I think that they think that we think that they’re special as well. So it’s a nice little ongoing love affair (laughs). Something similar to that, I would think, because that’s the way I feel. I actually feel love, appreciation and respect – all those kind of great things that we have over there. It’s not that we don’t feel them here at home (in the USA), it’s just a little more prevalent. UK audiences seem to be a little more genuine. There’s something so real, wonderful and warm about the fans and the people in all of the UK that is absolutely amazing. We actually hate to leave – and that’s all the way down to the musicians. We just like to say to all the people – the people of the UK; North and South, East, West, Wales, and Scotland – that we’d just like to thank them for what they’ve given us. I’m just really looking forward to this trip, you know.

What memories do you have of your very first trip to the UK back in the 60s?

Our very first trip to the UK was mostly promotional but it was exciting ’cause it was  brand new and I didn’t realise that all the way across the ‘pond’ there were as many people that cared about us and loved us and loved our music as there was. I was actually really taken by that many people accepting the Four Tops and how Brian Epstein, who actually was also part of our first promotion and our first tour, treated us and how he felt about us and how he wanted us to be as popular in the UK as The Beatles were in the States. He had a genuine appreciation for us, which he helped to make go over to all of the UK. It was an amazing trip.

Coming from Detroit, what was your first impression of England and the UK?

It was the first time that we had been overseas. First of all, it was really different and the culture was different. Television shows would go off in the middle of the day. That was the only thing that annoyed me (laughs). But it was so exciting and it was different. At that time I was very conscious of English attire and so the first place that I went to was to some tailors to have some stuff made, some English kind of things made. I was so into English male attire and initially all I did for the day was shop around for clothes. I’d go to the tailor to get this and to get that. That was exciting but the people were always just so warm and friendly. I loved the way they sounded when they talked. It took me a while to pick up on it and to really understand because some of them would talk so fast. It’s a different kind of dialect and you have to really listen. But I caught on pretty quick and I fell in love with it.

Going back right beginning, can you remember when you first sang together with Levi, Obie, and Lawrence in the original Four Tops?

Oh absolutely, I remember distinctly. It was at a party given by these girls at our high school club. The name of the girls’ club was called The Scheherazade. We were like the elite of that school; the prettiest, the most finest, the best brains and all of that. I was one of the star athletes and Levi was always at my side; he would sing on the bus, going to track, going to football, or going to basketball. He was right there with me as a buddy. And the girls invited us. This was the kind of party that you were invited to. They invited me to bring along Levi and anybody else that I thought could possibly sing. That’s when we called ‘Obie’ Benson and Lawrence Payton. Levi and I thought: maybe we can hit it off with these guys with these girls because these two guys could sing well. We’d all had been singing with different groups around and so we got together and sang at that party. We said: Levi, you just sing the lead. We blended so well. It was just so perfect. We all looked at each other and said hey man, this is good, so we decided to start rehearsing and form a group. And that’s when we formed. It was the first time that we sang together and it was actually amazing. Right away I just started singing top tenor. Lawrence was second tenor and Obie was third on bass and of course, we would say “Levi hit the ball. Quarterback, go for it!” We were extremely excited because we went there for another reason. To be honest, we went there to be with the girls. I’m not going to kid you. We didn’t go there to try and form a group; we just wanted to be able to hopefully accomplish our mission of the night (laughs) and we had great fun. But the most fun we had was singing together; we realised that. The next day we started rehearsing and from there we started doing some amateur shows. We did the biggest amateur show in Detroit. At that amateur show there was an agent who said that he could book us in nightclubs and he eventually followed through on that and we had our first engagement not too long after that and then we bought our first uniforms and had our first publicity pictures. We scuffled right up to that first engagement but once we hit the stage at that first professional engagement we knew right then and there that that was what we wanted to do. I had a scholarship to college but I turned that down. I also had two jobs waiting for me in the state and in the city because I’d taken those tests and I’d just graduated. But we all felt after we came off that stage that this was what we wanted to do right then and there. We started towards making this a lifetime career. At that time, a lifetime career was 15, 20 years and if you got to 25 it was like amazing. And now here it is sixty years later – what a blessing.