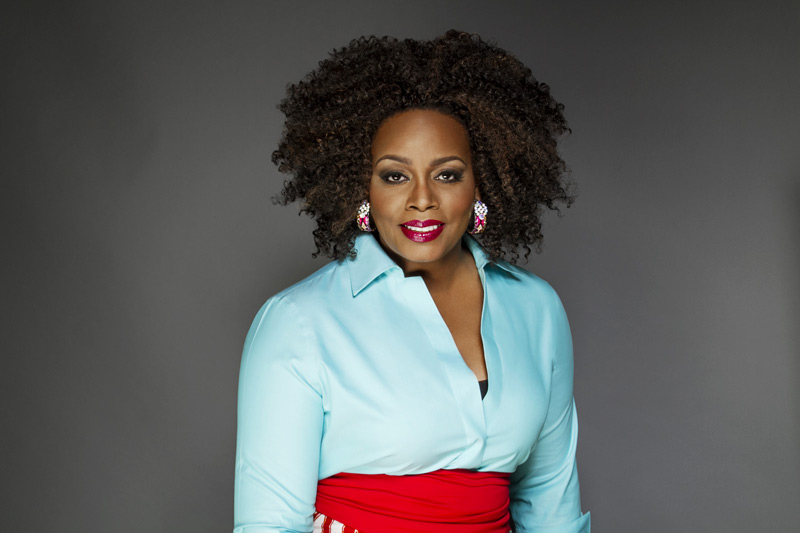 Did working with those two guys lay down the groundwork for you as an artist in terms of your influences then?

Yes, that, and how to be free in your craft: how to bring out and define and refine your own uniqueness. I loved that – and the fact that they shared their stages with me.

On your first album for Blue Note in 1987 (‘Dianne Reeves’) you can hear those influences – both Latin and Caribbean.

You spent over 20 years with Blue Note. What memories do you have of working there?

The best thing that I loved was that Bruce Lundvall (then the head of Blue Note) was the man. I loved it that when it came to albums, the whole thing was about the artist being themselves so there was nobody going ‘do this’ or ‘do that.’ He would suggest jazz tunes – he would give me lists of tunes to check out – and I loved him, it was great. He’d come and hang at the sessions and he had a musician’s ears so it was really high times to be in a place where they could document your growth. So it worked for me.

What did it feel like to be associated with the label that’s iconic and has so much jazz history attached to it?

You knew that the history was there but the history was also in the way that they let artists be themselves so being in that kind of environment was so essential and empowering for me. As a result of that I have my own mind, I have my own heart and I have my own decision-making. Everything is my own. So when I walked out of there after all those years it was nice but when we parted ways, it was really time for a change.

Was it something that you felt you needed to do to move on and evolve?

Oh God, yeah. The music industry just changed and Bruce was no longer at the helm and the reason I went there was because of him. I had done the ‘Good Night, And Good Luck’ album with Concord (as a one-off while still with Blue Note) and (the company’s boss) Norman Lear was just like this really down to earth cat and so it was time to make other kinds of deals. So yeah, it worked.

You mentioned ‘Good Night And Good Luck,’ which was the soundtrack to a ’50s period movie made in 2005 by George Clooney. How did you get involved with that project and what was he like to work with?

He was great. I asked him: why did you select me? He said: “because you are one my aunt’s favourite singers.” She introduced him to my music. It’s funny, because we did this gig together – Rosemary Clooney and me – it was for ASCAP, just a singers’ thing in Los Angeles. I don’t even remember what we sang but I just remember we sat in our dressing room and had a ball, just laughing and talking. I knew very much who she was. So we talked there and we saw each other maybe a couple of times after that but it was through her that I ended up on the film. The thing I loved was that he understood this music because he used to travel with her. We even sang the music live in the film and I thought that was just great and I got to reference all these singers – from Dinah Washington and Billie Holiday to Ella Fitzgerald and Carmen McRae – and create this singing character with respect to the period …and I loved it.

Did you have a free choice in terms of the song selection?

No, George selected the material because it was part of the script and I thought that they were very skilfully selected. But, like I said, the way that we did it was very much like the way that they would perform the songs at that time. And then later on, we did the soundtrack. There wasn’t supposed to be a soundtrack but I thought, no, we’ve got to go in and record these songs: we’ve got to do this and need to do a soundtrack of this record. So he agreed. It’s funny because he wasn’t at the studio but he was on the phone at the studio (laughs). We’d talk back and forth and he was like “yeah, do it.”

And ironically, it won you a Grammy…

You’ve won four Grammys to date. What does it mean to win one – or even four?

I mean it’s nice because you are voted for by a jury of your peers. It only lasts for the moment that you receive it but it’s really nice to have it. But I think the greatest reward is to be able to go places and people coming to see you. At the end of the day a Grammy can’t do that.

One final question – what’s on the horizon for you after this album? Do you have any unfulfilled ambitions at all?

Well, I’m very, very open, Things come up and I’ll think, ooh, that sounds like fun but more than anything I usually have a sketch of the idea for what I want to do for the next record…but I never really want to talk about it until it’s out there.

HER LATEST ALBUM, ‘BEAUTIFUL LIFE,’ IS OUT NOW VIA CONCORD/DECCA.