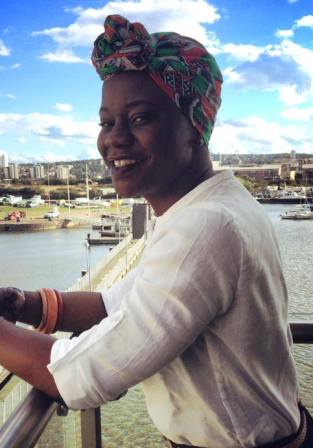 London-based singer/songwriter DEBRA DEBS is currently getting some serious attention from knowing soul folk. She debuted back in 2011 with an EP that got her name known around the capital, but with a first full album – ‘LIFECYCLES’ – topping a number of soul charts AND being nominated “Album Of The Week” on Jazz FM we thought it was time to find out more about the sweet voiced song bird whose beguiling brand of soul is hard to pin down but totally unique. We began by asking Debra about her background…..

I was born in the capital city of Cameroon – called Yaoundé in the early 80’s. I grew up with my brother and single mum [and oftentimes a host of other lovely family members, which is how we roll in African communities]. At 10 I was shipped over to boarding school which I attended for 7 years and then moved over to the UK for further education. I had a brilliant childhood which was pretty comfortable and I suppose has given me the grounding in life that I have.

How did you first get involved in music?

My mother was an avid music lover who would listen to all genres from Rock, pop, RnB, Jazz, Gospel and even sang in the church and women’s choirs. It was through her that I came to know about the Beatles, Elton John, Smokey, Ella Fitzgerald even Dolly Parton and other music legends. I do always remember an episode in primary school when instead of doing my homework I’d spent a couple of days penning down Dolly Parton’s lyrics from ‘A Coat Of Many Colours’ and trying to learn the song properly! My mum and her friend who came to visit found out and told me off for lazing about! I also remember regular instances where I would take the radio everywhere I went in the house, from bathroom to bedroom to dining room to lounge to backyard. I played it at the loudest I could get the songs at, waking my mum from her every afternoon nap and being scolded. I so badly wanted to understand music so I’d also record on the cassette players back to back and work my own songs and harmonies up – which was quite funny looking back now.

How then did you convert that childhood passion into a professional career?

My obvious involvement in music came when I joined my college choir as a tenor singer and learnt exactly how to sing, harmonise and work with others which led to me forming a gospel group with 7 of my classmates and writing our songs. We did so well at school and nationally that I figured out if I couldn’t do anything else in life I’d be a singer, so I proceeded to completing a diploma and degree in Popular Music at Vocal-Tech in West London after having battled with my mum on that topic. She’d actually flown over from Cameroon to convince me to do a degree in Communications instead! I battled her and raised some cash for my 1st year deposit for my Music Diploma and she paid the full fees for 4 years which were about £5500 per year for an international student. She’s now my greatest supporter. Above all else college showed me that music was a serious art form and not a random hobby.

Take us from that first realization to making records….

I’d always wanted to do an album but was never quite ready so I was still looking for my own sound after I graduated in 2005. I also never wanted to be a broke musician so then pursued a Masters Degree in International Business in case the music failed I knew I’d still be employable. From there I commenced work as Business Analyst in the city but with how I’d approach my music dream still at the back of my mind. The truth is every musician knows when that rest time is up you have to release your material. You become listless in all other areas of your life – so in Jan 2011 unfortunately (or fortunately) my time was up. I was going to be 30 that October and the pressure started to eat me up. I’d been doing open mics and free shows here and there and building a small network of fans, musicians and singers – heck I even frequented Jazz Café Sunday Jams [which I don’t think are run any more]. I initially wanted to produce an album myself but thought it was a rubbish idea because I was not a professional producer so I sought the services of some musicians I’d met along the way. I wrote the draft songs in lyric and music form and sent it over to them and they completely transformed it into what you now have as my album ‘Life Cycles’. I was blessed to work with people who got my vision. The album had officially been in the making in 2011 but I’d been writing towards ‘an’ album since 2008.

But you released an EP before then full album, didn’t you?

Yes, with the help of friends and family I launched an EP entitled ‘WHUMAN’ in November 2011 and pretty much set it as a precedent for what was to come. I then took another break in 2012, got back into music promoting myself and prepping for the ‘LifeCycles’ launch in 2013 by doing specialists events such as the Urban Music Awards, National Reality TV Awards, Appearing on Vox Africa to promote my video for Africa ‘Higher Higher’ which you know got 1+ million views on YouTube. 2011- 2013 was pretty much around building my social network and creating content about me on the web pre-the full album release. Then I launched ‘LifeCycles’ on Bandcamp.com and a few DJs picked it up from there and ran with it. Their support and word of mouth has been instrumental to my exposure!

The album now … Why ‘LifeCycles’?

Funny you should ask because the original title was ‘Phases’. My rep from the Urban Music Awards and my designer asked me to go back and come up with something that would make listeners think rather like the EP title ‘WHUMAN’ did! ‘WHUMAN’ was about my experiences as a woman and human being. ‘LifeCycles’ is storybook about the good, bad and inexplicable experiences we all go through in life. These stories are replicated in everyone’s life and ‘experiences’ are thus a cycle of life. Hence the title ‘LifeCycles’. Note the upper case L and C!

What kind of overall sound were you trying to achieve… did you have a particular template?

I’ve been mesmerised by Soul and Jazz music from a young age. However, when I first heard Lauren Hill’s ‘The Miseducation of Lauryn Hill’, Jill Scott’s’ Who is Jill Scott’, D’Angelo’s ‘Voodoo’ and Musiq Soulchild’s ‘Aijuswannasing’ – I knew I had found MY SOUND. I’d been a big fan of all other RnB, Jazz, Rock singers but the word play, intelligence, arrangements and live feel these albums had caught my creative attention better than anything else had. I set about to use these as inspirations rather than copy them so my choice in producers was also driven by the fact that these guys were fans of that kind of music.

How did you write the songs that make up the set?

The songs were written as I felt inspired. Sometimes I’d hear a word and write lyrics to it. Other times I’d be inspired by music, listening to another artist or simply just start playing the piano and lyrics would come about. I have some songs that didn’t make the cut as the plan was to write intelligently and captivate a mature mind.

Let’s look at some individual songs now. ‘Fizzy Lemonade’ is getting a lot of attention… tell us about that one… and the quirky lyrics

Hahaha – I’ve sang that song to death in the last 4 years but I’ll never tire of it. I wrote it in 2009 after having listened to Jill Scott’s ‘Beautifully Human’ album every day all day. I can’t quite remember in what context but some friends and I were talking about wine preferences over dinner and Fizzy Lemonade just sprung to mind. I wrote that down and later created a groovy Jazz instrumental to go with it. I honestly cannot explain how I wrote the lyrics but they were written across 3 days because I wanted the story to be perfect and interesting- I let my imagination travel as far as it could with that song.

You’ve allowed it to be remixed… why?

I need to be heard by a wider audience and I trusted the skills of the Reel People to do a good job – and so they have. If it helps put Debra Debs out there, then why not?

What about the song ‘Daddy’ is that autobiographical?

Yes it is. My dad and I had a weird relationship whilst I was growing up and although it’s improved in the last couple of years, ‘Daddy’ was originally written in 2008 when I finally decided to face it all and proceed to forgiving and healing myself. As part of the ‘LifeCycles’ album, I knew people would relate to my story so it had to be put out there as neither I nor some listeners are alone in this experience.

What’s your favourite song on the LP and why?

I love all my songs but ‘Speeches’ for me was fluid, dreamy and easy to create. Singing my own personal story in English and Pidgin English [Broken English] , was adventurous and not least the fact that my producer Precious Obimdi did take his time to listen to the lyrics and make the music as emotionally invested as I wanted it to be.

How will you be promoting the album?

Since I’ve just released the album we’re starting with social networking [tweeting, facebooking, youtubing etc] and a heavy focus on radio plugging, press interviews and creating awareness about the album. It’s available for purchase on digital stores [iTunes, Amazon, CD Baby etc] and plans are underway for live shows. My website, twitter and facebook fan page are constantly being updated.

Where do you see yourself in 12 months time and then in five years time?

You’re asking me to tell you my dreams from the last 10 or so years??? Well…. appearances on Jools Holland, Jonathan Ross, Arenas, Jazz Festivals, Award shows and nominations … then working with Jill Scott, collaborating with the finest artists, writing for films, touring the world, championing development for Africa and being an ambassador for good music … not much really. Yes… I have way too many dreams so let’s hope they can fill up 1-5 years in no time!!

Want to find out more? ……… go to www.debradebs.com

DEBRA DEBS’ ‘LIFECYCLES’ is out now and there’s a full review in our reviews archive.