DAUGHTER OF AN OLD MASTER: A PORTRAIT OF LALAH HATHAWAY 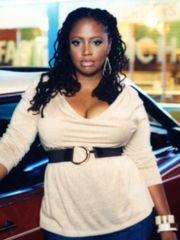 LALAH HATHAWAY, the eldest daughter of legendary ’70s soul legend, Donny Hathaway, has a new album, ‘Self Portrait,’ due out in the UK this month (read the review of it on our reviews pages). To coincide with the release of her debut CD for Stax Records, the Los Angeles-based singer/songwriter recently talked about her life and music with www.soulandjazzandfunk.com’s own Charles Waring. In this, the first of two interview features with Lalah, the singer discusses her new album (a second feature in which Lalah talks about her father, family and the music business, will follow later).

How did you get to sign with Stax Records?

Well, you hear these wonderful stories about how people get signed but in my case a guy who was actually working at Virgin Records when I was there joined Stax and called me and said ‘we’re revitalising the record label and we’d like to sign you.’ So I said yes.

It’s a label with a lot of history attached to it.

Absolutely. It’s a name synonymous with the concept of soul music, so it was an honour. Growing up here in the United States and listening to soul music, you can’t deny the house that Stax built. So to be associated with people like Carla Thomas, Mavis Staples, Isaac Hayes, Booker T and Otis Redding – names that really define what soul music is and who are really contemporaries and peers of my father – it’s very exciting.

What can you tell me about your new album, ‘Self Portrait’?

I’m very excited about it. It’s probably my most personal piece of work. It’s really about the fact that I’ve been in the music business for a long time now and I’m just sort of reaching almost the beginning of what I can do – as an artist, as a producer and as a writer. So it feels like a record that in my mind I wasn’t sure what it was going to be but as I was creating it, it started coming into the frame. It’s definitely a record that is the soundtrack of the music of my life over the last couple of years since the last record. So it’s a very honest and vulnerable depiction of my life set to music.

I believe Rahsaan Patterson is on the album.

He’s a friend of mine and a very talented guy. He actually co-wrote and sang on the single with me, which is ‘Let Go.’

Who else is playing on the album?

We have Michael White, the drummer; Melvin Davis, a great bass player; and Tim Carmen, an organist/pianist who played with Eric Clapton. They are the rhythm section on a couple of tunes. I also have Erroll Cooney playing guitar on the record with Lenny Castro playing percussion on most or all of the record. Marcus Miller appears on ‘Learning To Swim’ playing fretless (bass).

Of course, you’ve had quite an association with Marcus over the years.

Absolutely. We’re very good friends. He takes good care of me. It’s a really tight little record. Proper R&B records in the States tend to get spread out but this record is pretty focused. It wasn’t really about the musicians or producers. It was about getting the song and having a good and consistent sound throughout the whole record.

Although you’ve given the album a theme by using the title ‘Self Portrait,’ the songs do seem interlinked together musically.

Right, that is why I’m really proud of it. It really feels like a real, complete body of work as opposed to what sort of happens a lot of times which is people bring songs and you write to tracks and then you collaborate with the writer. A lot of times the records can be kind of disjointed and this record for me is very connected, very cohesive and it kind of tells a story about me from beginning to end, which is why I called it ‘Self Portrait.’ Unlike some of my other records, I was involved in other things besides the music – like the sequencing of the record to tell that story: also, the way that the artwork appears because that’s my concept as well. Everything about the record is really what I wished and hoped for so I’m really excited about it.

So how does this new CD stand in relation to the other albums that you’ve done?

I really love all my records – they are all my little children. This one feels more complete somehow – maybe because it’s still fresh in my mind. It was a quick kind of front-to-back record, which doesn’t normally happen. I got signed and I got the record started and then got it finished in about six months.

Did you have songs already prepared or did you just write material from scratch?

‘One More’ is quite different from the other tracks on the set. It has a hip-hop vibe.

Kind of. I don’t know if you’d call it hip-hop. I don’t know what it is. I like to work with people that are going to bring me something different or new or really exceptional. Terrace Martin, who co-wrote that track, does a lot of work with people like Snoop Dogg so I think it’s interesting for people to hear because they’re not used to hearing me singing over beats and that kind of stuff.
I don’t really feel like beats and music are mutually exclusive. I have always felt that any of the R&B songs that I’ve heard – whether from Faith Evans, Mary J. Blige or Aaliyah (especially the songs she did with Timbaland, which I thought were so great) – I always felt I could do something like that and that would be fun to do. I still have aspirations to do something like that – I’d love to work with The Neptunes or with Timbaland. I listen to all this kind of music and as a musician it is my aim to do as much music as I can. I would never limit myself to one style or one set of beats.

What plans do you have after this album? What sort of record would you like to make in the future?

Really? Why is that?

I wanted to make a live record since 1992 and nobody at a record company thought that it was a feasible idea and then, of course, Jill Scott made one and then Erykah Badu made one. Now everyone knows that it’s a hip thing to do, so hopefully, it will be nice to go play all over the world and put all that together and make a live record.

(as told to Charles Waring)

‘SELF PORTRAIT’ is released by Concord Records in the UK on August 18th.

Look out for the second part of our LALAH HATHAWAY interview soon at www.soulandjazzandfunk.com

Tags: DAUGHTER OF AN OLD MASTER: A PORTRAIT OF LALAH HATHAWAY