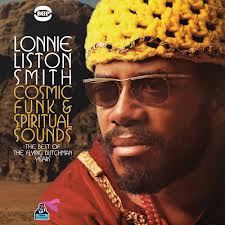 In the mid-’70s, jazz pianist Lonnie Liston Smith married mellow-vibed messages of love, peace and universal harmony with propulsive dance floor beats to create a new kind of cosmic-infused jazz-funk. Together with his band, The Cosmic Echoes, Smith – who was signed to Coltrane-producer Bob Thiele’s Flying Dutchman label – released a clutch of trail-blazing LPs; among them ’73’s ‘Astral Traveling,’ ’74’s ‘Cosmic Funk,’ and, perhaps most important of all, ’75’s ‘Expansions’ featuring an anthemic title track that became a firm favourite with UK soul, jazz and funk aficionados.

His career began much earlier, back in the mid-’60s, when he was a music student in Baltimore. He backed singers such as Ethel Ennis and then moved to New York where he briefly joined Art Blakey’s Jazz Messengers before enjoying a stint in Rahsaan Roland Kirk’s band. He was then recruited by legendary drummer, Max Roach, before teaming up with free jazz saxophonist Pharoah Sanders in 1968. It was while he was playing in Miles Davis’s Avant-funk band in the early ’70s that Smith was offered the chance to cut a record under his own name for the Flying Dutchman label.

The keyboard maven’s Flying Dutchman tenure is celebrated by a new 15-track compilation on Ace’s BGP imprint called ‘Cosmic Funk & Spiritual Sounds,’ which selects all the key cuts from a richly fertile period in the keyboard player’s career. Just recently, the 72-year-old Virginia-born musician visited the UK where he and a new incarnation of The Cosmic Echoes sold out five consecutive nights at the UK’s premier jazz club, Ronnie Scott’s. During his stay, Lonnie found time to talk at length to SJF’s Charles Waring about his music and storied career…

How was Ronnie Scott’s last night?

Oh, it was great, man. We started Thursday and sold out all five shows. The band was hot, a new young band, so it was really great. Over here in London, they’re really enthusiastic. When ‘Expansions’ came out, it took off. They just fell in love with it. Every time I come over here I meet people – sometimes their mothers, daughters, and even their grandchildren – who all say “we all were raised on ‘Expansions.'”

There’s a new compilation of your Flying Dutchman material just reissued on BGP. What memories does that music bring back for you?

That time was a great experience, especially when you start your own group and everything is fresh and you’re all energetic and excited. I was still with Miles Davis when I did my first album, ‘Astral Travelling,’ and then (producer) Bob Thiele called me when it came out and said: “Lonnie, you’ve got to go and support ‘Astral Travelling'”. I said: “oh man, I don’t want to leave Miles.” But I told Miles and he just laughed and said: “that’s the music business.”

Can you recall how your signature tune, ‘Expansions,’ first came about?

That was the first time that I wrote lyrics. I was tired of what I was hearing on the radio so I said let me give some meaningful, positive lyrics. I was studying Transcendental Meditation at the time. I thought that people needed world peace. So that’s where the line “expand your mind” came from and it just took off. A lot of people now are studying that song in school. Everyone thinks that it was electric bass on it but it was an upright bass, an acoustic bass. Every musician on that record had never played that way before. We all came from straight-ahead jazz. But I guess it was a little bit like when Miles (Davis) did ‘Kind Of Blue’ – that was different for them and it took off. And so for ‘Expansions,’ I told them what we were going to do and everybody just locked in and it worked.

‘Astral Travelling’ is another classic song of yours. Can you remember what inspired it?

I was in the studio with Pharaoh Sanders and we were doing (the 1971 album) ‘Thembe’ and that was the first time that I touched an electric piano. We walked in the studio and I’d never even seen a Fender Rhodes before. I asked the engineer: “what is that in the corner?” He said, “that’s Pharaoh’s electric piano.” So everybody else was setting up the drums, and Cecil (McBee) was getting his bass together and Pharaoh was unpacking his horn. I didn’t have anything to do because the grand piano was waiting for me. So I walked over into the corner started messing with the knobs on the Fender Rhodes and started playing it. A song just came out of nowhere and everybody ran over to me: the engineer, Pharaoh and Cecil. They said: “what is that?” I said: “well, I’m just writing this song right now.” They said: “man, we’ve got to record that.” Then they said: “what are you going to call it?” I’d been studying astral projection and it sounded like we were floating through space so I said: “I’m going to call it ‘Astral Travelling’.” It’s a 12-bar blues but I call it a 12-bar 21st-century cosmic blues. It came to me organically because I grew up listening to people like Robert Johnson and Leadbelly…

Right. We all grew up listening to them, plus we were going to church. So it just came out that way. I said to myself: I’m still playing the blues but I made it cosmic. And that’s what happened.

Your music has stood the test of time and lasted well. Why do you think that is?

I always wanted to come up with a universal sound. That’s always what I wanted to do: have a universal, eternal sound so that the music would be timeless. So if you listen to it today it would sound like we just recorded it. So I was always trying to do that. I studied all the different philosophies and they tell you how everything is eternal.

What about your band, The Cosmic Echoes? How did they form?

Everybody had a name: like Earth, Wind & Fire and Roy Ayers with Ubiquity. I was doing some studying and I read that all the sounds we hear are reflections of the cosmos so I just thought of the name The Cosmic Echoes and decided to call ourselves Lonnie Liston Smith and The Cosmic Echoes. I’ve got a new band that and they said “we’re The New Cosmic Echoes” so I said okay.

You worked with Bob Thiele, who co-founded the Flying Dutchman label. What was he like to work with as a producer?

He was phenomenal. People don’t realise that Bob Thiele was really important – he produced all the John Coltrane records (on Impulse!), did some things with Duke Ellington and produced (and co-wrote) Louis Armstrong’s biggest hit, ‘Wonderful World.’ And he went all the way back to Buddy Holly – he produced Buddy Holly. And then, of course, he produced me and Gil Scott-Heron. Bob didn’t get in your way. That was his main forte. He knew how to stay out of the way because you’re the Artist so he lets you be yourself and would record your concept. Sometimes he would come to the studio and he would be funny and mess with me. One time he came to the studio and said to me “I’ve got a nice title for you. Why don’t you write a song called ‘Dumpy Mamma’?” I said, “wait a minute, Bob, that’s not cosmic!” He just laughed. But Bob never got in anybody’s way. He told me a story about when he produced the Duke Ellington and John Coltrane record (on Impulse!). Bob always wanted another take. He said to them “let’s do another version” and Duke Ellington said to him, “Bob, why are we doing another take? Each one’s going to be different.” So Bob left it alone.