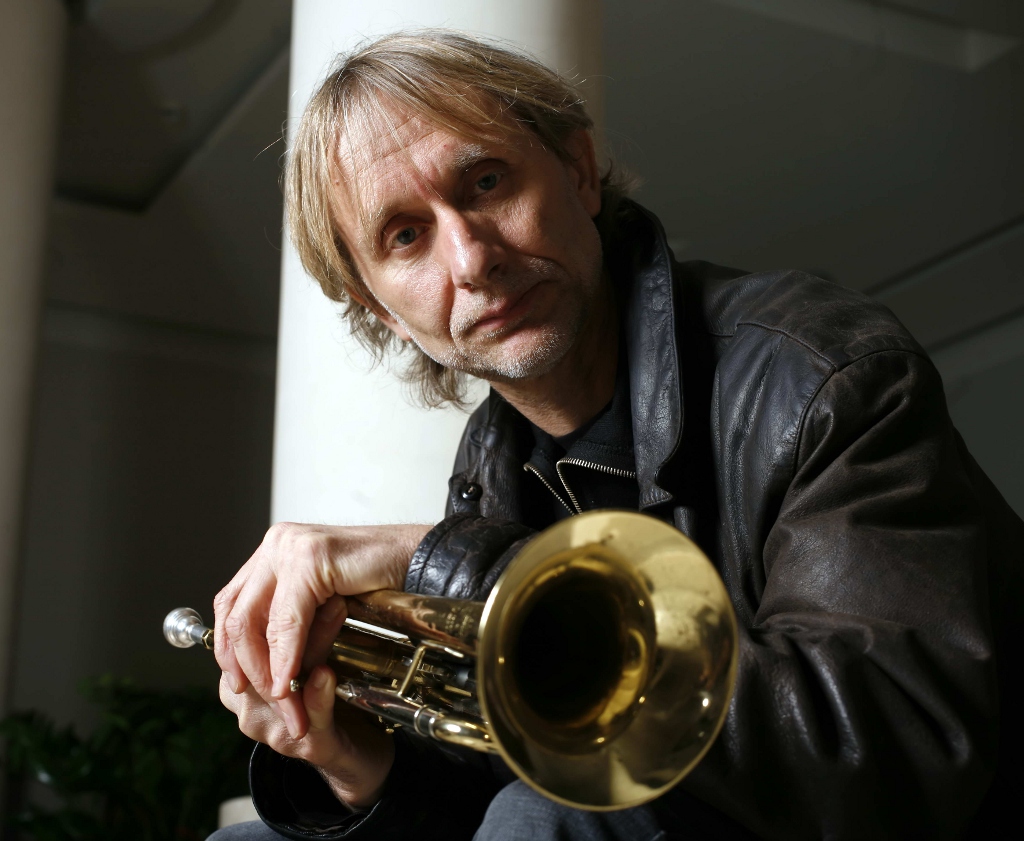 For over twenty years now, Swiss-born ERIK TRUFFAZ has been making music sans frontieres. Those that like to pigeonhole music would describe him as a jazz musician, perhaps, but in truth the softly-spoken 55-year-old trumpet player makes music that is difficult to classify – yes, there’s arguably a palpable jazz dimension to the soundscapes that Truffaz creates but his embrace of and immersion in hip-hop, drum-and-bass, ambient electronica and world music as well as pop and rock results in a unique and anomalous stylistic hybrid that is hard to define. This musical pathfinder spent many years at the Blue Note label where he gained notoriety for albums like ‘The Dawn‘ and ‘Bending New Corners‘ in the late-’90s which took Miles Davis’s concept of fusing jazz-with rock further by incorporating rap elements.

For the curious and those wishing to gain further insight into Truffaz’s singular style, the trumpeter and his quartet – which comprises longtime members bassist Marcello Giuliani and keyboardist Benoit Corboz, plus new drummer, Arthur Hnatek – are due to play two nights at London’s legendary night spot, Ronnie Scott’s, next Monday and Tuesday, 21st and 22nd of March. He’s also just been added to the line up at this July’s Love Supreme festival at Glynde House, Sussex. There he’ll be showcasing songs from his latest album, ‘Doni Doni‘ – released in January via Parlophone – which is arguably one of his most satisfying artistic statements yet. Featuring award-winning France-based Malian chanteuse, Rokia Traoré, on four cuts, it melds edgy urban tone poems with African grooves and mellow mood pieces.

Ahead of his UK appearances, the French trumpet maestro talked to SJF’s Charles Waring…

You’re coming to Ronnie Scott’s next week – what are you going to be playing?

Naturally, we are going to be performing songs from the new album, ‘Doni Doni.’ We have such a big repertoire that I’ll probably choose songs from ‘The Dawn’ and a lot of different albums of mine. I’ll pick some tunes from them but I don’t exactly do a list of what to play except the first three songs. But we play two sets so we have time to include a lot of different material.

You’ve played at Ronnie’s before – what’s it like to play there, because it has a lot of history attached to it, doesn’t it?

Yeah, it’s fantastic to play there because of the history of the place and the public and the acoustics. It’s always great to play in a small club. You know, step-by-step these kinds of places are disappearing in the world but they are really important.

Tell me about the musicians in your band that are coming with you.

I’ve played with the same musicians for the last three albums but now I have a new drummer. My last drummer, Marc Erbetta, wanted to stop and do his own thing and stay home with his kids. The new drummer is Arthur Hnatek, who is a young guy, twenty-five years old, who studied in New York for eight years and performed with (Armenian pianist) Tigran Hamaysan. He brings a new sound.

Your bassist, Marcello Giuliani, has been with you a long time…

Yeah, Marcello Giuliani is really important because we began performing with his own band which was called MGM. It was twenty-two or twenty-three years ago at the Blue Note in London, which was really a drum and bass temple so we performed there and after that experience we decided to adapt this electronic music to our quartet in an acoustic way. And Benoit Corboz is on keyboards, and he was at the beginning also. Marcello also produced the new album, more than me, because I’m looking at composition and melodies and musical things but I don’t produce in the studio, that’s not my job. Marcello does it.

You mentioned the new album, ‘Doni Doni’ – what’s the story behind it?

There are many stories behind it but the first story is that we went to Johannesburg three years ago for a collaboration with a dance company (Vuyani Dance Company) and performed with them. We got from them some really good African vibes and composed ‘Kudu,’ the second tune on the new CD, for that event. When we compose we improvise as well and record it and keep what we love and when we did this I could feel a lot of African vibes in the tunes so we decided to invite (Malian singer) Rokia Traoré (pictured below) for her African voice.

Yes, she’s incredible. She’s been in France a long time so I knew of her for ages.

What was she like to work with in the studio?

It was really easy to work with her. We were preparing the first tune, ‘Djiki’n’ (its English translation is ‘humility’), and afterwards I sent her the music and she prepared the melody and the words. When she came into the studio it took ten minutes. We improvised the song ‘Comptine,’ which is at the beginning of the album and also we improvised the introduction, the first part of ‘Doni Doni.’ I wanted to do this because I had the idea in my head to see if she could improvise in an ambient style.

How would you describe your own music?

So you don’t regard yourself as a jazz musician?

My first album on Blue Note (1997’s ‘Out Of A Dream’) was a mainstream jazz album but my music is not jazz mainstream. I was not born in the USA in the ’50s or ’60s. What I heard when I was a kid was French chanson and then also English rock.

You’re noted for being influenced by hip-hop and fusing it with jazz. What inspired you to do that?

I started listening to hip-hop in the ’80s – I used to listen to A Tribe Called Quest – and afterwards I performed with (French rapper) Nya and his hip-hop band so hip-hop is not so new for me. It lies between poetry and singing and I love it but I’m really critical of hip-hop and the sense of the words, of what is said, because it has to be positive for me. Oftentimes it’s really always the same things they speak about. It’s a pity that a lot of times people in hip-hop are materialistic and capitalist and full of ego and all this shit. It has to be philosophical.

You mentioned A Tribe Called Quest, and they were very philosophical, weren’t they?

Yes, they were really sophisticated.

And they used jazz samples as well.

Yes, they were at the beginning of the trip-hop. I played many times with US3, do you remember them? They had big success twenty years ago with ‘Cantaloop.’

Going right back to the beginning, what attracted you to the trumpet?

Just because my father was in a jazz band and when I was five or six I could choose an instrument and I chose a trumpet. It’s difficult to explain why but my father played the saxophone and I wanted to play with him.

What was the first jazz record that you heard?

Who else influenced you when you were learning the trumpet?

It’s a long list during a long period and there were many. After Louis Armstrong I discovered Dizzy Gillespie and he sounded so strange but I was really curious about his music and after, I was a little bit sad about the trumpet because it was the 1970s when there were Led Zeppelin and all these rock bands. I wanted to stop playing but then I discovered Miles Davis’s ‘Bitches Brew’ and his electric music so I bought a wah-wah pedal and an electric microphone and joined a jazz-rock band. Miles Davis really showed me the trumpet could play in contemporary music. And even now, today, he still teaches me how to play simple but sophisticated.

Have you got a favourite Miles album?

Now my favourite album isn’t really ‘Bitches Brew,’ it’s more like ‘Porgy and Bess,’ the Gil Evans-arranged album, and also the old Prestige ones ‘Relaxin’,’ and ‘Cookin’.’ I like to listen to them in my car – it’s easier to listen to those when you’re tired and you want to relax than ‘Bitches Brew.’ (laughs). I love ‘In A Silent Way’ also and ‘We Want Miles,’ the live one with John Scofield on guitar. That is incredible also but I love many, many of his albums – but not really his produced albums from the ’80, like ‘Tutu’ and ‘Amandla.’ I stopped listening to those then because songs from that time don’t stay fresh – that’s my opinion – because of the sound of the synthesiser and the drum machines.

What’s in the pipeline beyond this current album?

For the future I plan to do something with the duo. I will do this with my bass player, Marcello Giuliani, with banjo-trumpet or guitar-trumpet, and maybe also something with Richard Galliano, the accordion player.

Is there anybody that you would like to work with in the future that you haven’t worked with yet?

Yeah, many people, but it’s more pop musicians (laughs). Peter Gabriel, for example, and Bjork. I would like to record with Charles Lloyd too. I had a wonderful jam session with him at the Montreux Jazz Festival. It was really fantastic.

SEE ERIK AT THE LOVE SUPREME FESTIVAL DURING THE FIRST WEEKEND OF JULY 2016:

HIS NEW ALBUM ‘DONI DONI’ IS OUT NOW

Check out the review of Erik’s album here: http://www.soulandjazzandfunk.com/reviews/3962-erik-truffaz-quartet-doni-doni-parlophone.html