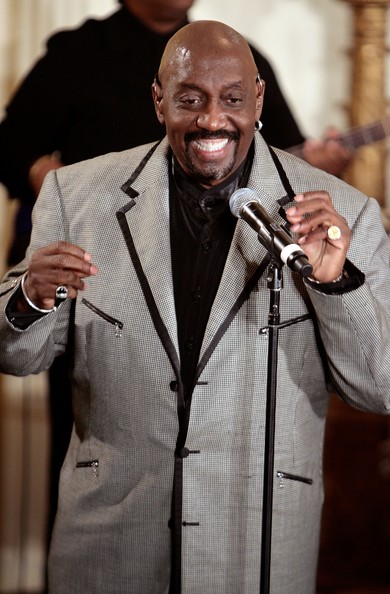 “We were always competitive,” laughs OTIS WILLIAMS, contemplating the healthy sense of rivalry that has existed for over fifty years between his group, The Temptations, and fellow Motown legends, the Four Tops. “That was the spirit of Motown, to have that competitive desire and to outdo one another,” Williams explains, reflecting on the strong sense of ambition that burned brightly in Berry Gordy’s acts. But, as the singer is at pains to point out, there was never any jealousy or raging animosity between them. “It was a friendly rivalry,” he states, adding that both groups still strive to upstage each other. “We’re like that even today,” he laughs. Indeed, both groups will have an opportunity to flex their respective vocal muscles against each other in October of this year when they join forces to tour the UK together later, when they will also be joined by another golden oldie soul act, family group, Tavares.

Williams, who’s 74 now, confesses that  England – which they’ve been visiting since the mid-1960s and where they racked up 31 chart hits between 1965 and 1992  – has always been a special place for both the Tempts and the Tops. Saluting the devotion of the groups’ fans in the UK, he says: “The British people are just so loyal and they have great knowledge of what good music is. They have shown us that they love the great melodies, the great stories, and how we try and present ourselves. So it’s a combination of reasons why our British fans are so loyal and dedicated and appreciative because they love that Motown sound even fifty-plus years later. They are just very knowledgeable about great music and you’ve got to remember that they’ve had some great artists anyway, like, naturally, the Beatles, Adele, and …Sam Smith.”

Talking ahead of the group’s upcoming UK tour to SJF’s Charles Waring, Otis Williams talks in more detail about his affinity with the UK, the group’s glory years at Motown and the their future plans…

First of all, what will you be serving up for British audiences when you come over later in the year?

We have two new members so that will be the first thing that they will recognise. We have new Larry Braggs and Willie Green Jr to go along with Ron Tyson, Terry Weeks and myself. And then after that, naturally, we will be doing the Tempts’ all-time greatest hits: ‘My Girl,’ ‘Ain’t Too Proud To Beg,’ ‘(I Know) I’m Losing You,’ ‘Treat Her Like A Lady,’ ‘Just My Imagination’ and many more.

What memories do you have of your very first tour to the UK?

We’ve been coming to is England since the ’60s when we did the TV show Ready Steady Go. I remember we stayed at the Cumberland Hotel. Every time we come to London we always stay there, it brings back such wonderful memories. On our first trip I remember rehearsing because we had to do Ready Steady Go, and The Supremes were rehearsing ‘Stop! In the Name of Love’ and we were doing ‘The Way You Do The Things You Do.’ It was definitely a culture shock being in England but it was just a wonderful place to be at that time because there was just a lot of partying and great music – it was when the Beatles were raging – and the British fans showed their love and desire for the Motown sound. So it was great being there, just seeing the different kind of culture and appreciation of us in comparison with the States.

How did you find British food back then? I think it’s improved now… But how was it back in the ’60s?

It has improved but you know, back then we just picked out what we wanted. It was a great change to eat over there and have British food. It was wonderful, that’s all I can say. It was a change but wonderful. We liked steak & kidney pie, and fish and chips, of course.

You mentioned the current line-up of the group but you’re the only original member left – how does it feel to be the last man standing?

Well, I’m just thankful to God that I’m still able to do what we’ve been known for for fifty-six years, so I carry it with great pride and remember the original Tempts, so it feels great. It’s not a bad feeling. I’m just blessed to still be able to do what we do and still enjoy doing it and to go there and to see the love and devotion of the British fans and how they just really have embraced us throughout our many changes, both music-wise and personnel-wise. So it’s a great honour.

What’s been the key to the group’s longevity?

The key is hard work. We act like we’ve never had any success. We act as if we’ve never had any hit records. We still have the eye of the tiger and we don’t think about resting on our laurels because when people put out their hard-earned money to come and see the Tempts and the Tops we try to give them the best show that we can, so we still work hard. We’ve been rehearsing, especially with the new guys, like mad, like crazy, so we don’t take anything for granted; we still try and stay on top of our game.

Going right back, can you recall how the group first got to sign with Motown?

Wow, you’re going way back on that one. Mr Gordy saw my group at the time, Otis Williams & The Distants, and we used to do record hops in and around Detroit. We had a fairly nice sized record on a little label that we recorded for Johnnie Mae Matthews called ‘Come On.’ Mr Gordy saw us at this record hop and he was impressed by the popularity of the record and then with the group’s performance and he just gave me a card and said “come see me, I’m starting my own label” and as fate would have it, after a few weeks I called him and went over to Motown. That was 1961 and we changed from Otis Williams & The Distants to the Temptations and history was made .

What made you decide on the name The Temptations?

The lady that we recorded for, Johnnie Mae Matthews, decided to keep the name after we were disenchanted at being there. So she said, “I’ll keep the name, The Distants,” and so we said “fine, keep the name, and we’ll start over again somewhere else.” We started over at Motown and we were nameless for a few days or so. Then we were standing out front of Motown kicking around names and (Motown employee) Bill Mitchell said, “what about The Temptations?” I said “I like that” and I had to tell the guys, Paul (Williams), Eddie (Kendricks), Melvin (Franklin) and Al (Elbridge Bryant) at the time. I will never forget what Paul Williams said: “a name is whatever we make it.” So we became The Temptations and it was put on our contract and we’ve been that ever since.

There been many different versions of The Temptations over the years – is there one line-up in your mind which is the definitive version of the group?

The definitive Temptations will always be David (Ruffin), Eddie (Kendricks), Melvin (Franklin), Paul (Williams) and myself (pictured left). That was the Temptations that the world initially came to know us by, but there have been some other great incarnations and reincarnations – when Dennis (Edwards) joined; and later the great lineup with Theo Peoples and Ali-Ollie Woodson; and now, the guys that I just mentioned at the beginning, with Larry Braggs and Willie Green Jr, Ron Tyson and myself. So I’ve been in many different incarnations of the group so I’ve been blessed to be surrounded by great singers and performers.

Was there ever a temptation for you to go solo?

Not really. I wanted to be in a group when I first saw Frankie Lymon and The Teenagers. It’s fun when you’ve got five guys up there being very dynamic, but if you’re a solo artist, that’s a lot of pressure for you because you primarily have to do things by yourself so I’m more partial to being in a group.

You must have had many highlights in your career – are there any that stand out for you above all the others?

When I look back on our career, we’ve had many highs – the first time we sold a million records with ‘My Girl’; we were the first act at Motown to win a Grammy; being on the Ed Sullivan Show thirteen different times: doing the Motown 25 television special; to get a star on the Hollywood Walk of Fame; being put into the Rock ‘n’ Roll Hall of Fame and the TV miniseries that has been popular since 1998 all the way to the present time; and now, getting to go to Broadway with the Temptations’ life story. So there’s a lot of highs. I’ve had more highs than lows. The lows were when I lost my friend Melvin (Franklin), and then David (Ruffin) and Paul (Williams), so I’ve had enough lows to remember but thank God I’ve had an equal amount of highs. It’s been an interesting balance.

Talking of the future now, any plans for a new album?

We’re waiting for Universal to get back to us. We’re going to take the new guys into the studio to do some new product. I don’t know just yet what we’re going to record. It’s still early yet, but that’s in the works. Were getting ready to possibly have a new single out and new album before we come to England.

Just finally, Otis, if you could pick just one Temptations song that encapsulates what the group is about, what would it be?

It would definitely be ‘My Girl.’

What memories does that song bring back for you?

It brings back a lot of memories but the one that I think always stands out in my mind is when we were in the studio recording it. We put the vocals down on the tracks and then Paul Riser added the strings and horns to it. I told Smokey (Robinson) in the control room back in Detroit: “Smokey, I don’t know how big a record this is going to be, but I’ve got a feeling it’s going to be a big one.” That was December of 1964. In February 1965 we were at the Apollo Theater and Berry Gordy sent us a telegram congratulating us that we were number one and had sold over a million records. The Beatles also send us a telegram congratulating us. So that was a special moment.

The Temptations go on tour with the Four Tops and Tavares in October 2016. Full tour dates below: