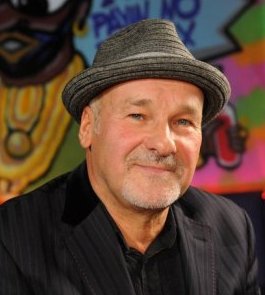 The UK’s favourite blue eyed soulster, PAUL CARRACK is all set to embark on a new major UK tour. This is straight off the back of touring with Eric Clapton. Those shows with old Slow Hand started right after Paul’s own last lengthy solo tour and in between all that Sheffield’s finest found the time to record a brand new album… the acclaimed ‘Rain Or Shine’. Paul also found time to talk to www.soulandjazzandfunk.com – his and the UK’s favourite independent soul music site. Logically we began by asking where he found the energy and motivation to keep touring and recording fresh, new music…..

It seems to be easier to keep going. It’s when you stop you realise how knackered you are! I’ve probably worked harder in the last 10 years, since becoming an independent artist, than ever before. The option seemed to be, sit back and wait for things to happen or get stuck in, get my hands dirty and create my own situation where I wasn’t beholden to the whims of major companies and such like. I also had great help from a few people like my band and crew who are always happy to go the extra mile to keep the show on the road. Having said that, last year was exceptionally busy because, as you’ve said, Eric’s tour rehearsals literally started the day after my own tour finished.

This new tour – what can the audiences expect…. any surprises up your sleeve?

We’re touring with seven pieces at the moment. The band includes my son Jack who shares drum/percussion duties with Dean Duke. It’s always difficult to get the right balance of old and new material especially as some people are only just ‘discovering’ me whereas others have followed us for years. We always include certain songs, for example ‘How Long’, ‘The Living Years’ and ‘Over My Shoulder’. It would be rude not to but we have a lot of material to choose from so we start with a shape of a set and tweak it as we go along to keep it interesting…at the moment we are doing five songs from the new album and they are all going down really well so it’s possible we’ll add more as we go along and people become familiar with the new album.

Now the new album. On your last set you hinted at your love of Ray Charles with the song ‘I Can Hear Ray’… now you offer a full blown homage to him – covering three of his songs. Can you explain?

I came off the road at the end of June and was due to start touring again in early October through to May at least. I really didn’t think I would have time to write a whole album from scratch. Richard Niles, who worked with Ray during his later years heard ‘I Can Hear Ray’ from the last album and had suggested at some point making a whole ‘homage’ album of Ray Charles songs. It seemed one way of taking the pressure off the writing aspect and I recorded a demo of ‘You Don’t Know Me’ which everyone seemed to like. I went off the idea of doing ALL Ray songs and looked at other covers. Meanwhile I thought anything I DID write would be a bonus. Before I knew it I’d written 5 songs pretty quickly. The original songs are more my sort of pop/soul tunes and the covers are more ‘classic’.

… and why choose those particular three (‘You Don’t Know Me’, ‘Hard Times’ and ‘Come Rain Or Come Shine’) and what do you think you bring to them that’s different?

I’d been going around for months whistling ‘You Don’t Know Me’ so that seemed a good place to start. On the Clapton tour Eric featured me, at his suggestion, on a version of ‘Come Rain Or Come Shine’ similar to the version he had done with B.B. King. My version, arranged by Richard Niles, is heavily influenced by the Ray Charles version, the one arranged by Quincy Jones. Ray’s version of ‘Hard Times’ is awesome and I must admit it’s a bit cheeky to even go there but I’ve never been afraid to upset the purists. I think music’s to be enjoyed and I enjoyed recording it.

The big set piece cover is the soul standard ‘If Loving You Is Wrong’… why did you go for that one?

Back in the 70’s my band Ace were signed to a small record company that distributed a lot of American artistes. Every now and then we would go and raid the stock cupboard. Fortunately for us we had all the Bobby Bland albums of that era and we just loved them. It was there that I found Bobby’s version of ‘If Loving You Is Wrong’. I was kind of aware that the song had been recorded by a number of artistes but I’m really only familiar with Bobby’s quintessential version.

How hard is it to tackle such an iconic song…. how do you try to make it different?

Well for a start I lowered the key and instead of going for power I went for a cooler, more intimate approach. I think Richard Niles’ string arrangement is beautiful.

Fans are also loving the Brenda Lee song ‘I’m Losing You’. Tell us about that one….

Showing my age a bit but, growing up in the 50’s, my older cousins were all massive Brenda Lee fans and I loved the Christmas parties when they would all be jiving away to the radiogramme (an old fashioned piece of furniture with a record deck… a kind of 50s I-pod!).More recently this tune kept popping into my head and I couldn’t recall what it was. Then, again showing my age, I would forget how it went completely. Then one day the penny dropped and I remembered it was the Brenda Lee song ‘I’m Losing You’. To my knowledge it’s not been covered too many times, if at all. I love it and again went for a slightly understated approach rather than belting it out.

Now some of your new songs now…. why did you chose ‘All That Matters To Me’ as the lead single… there’s a personal story behind that one to, isn’t there?

When I started recording I trawled around looking to see if I had any half finished ideas lying around. On my phone I found this little tune that I’d stuck down at some point and forgotten about. The difficult bit is always the lyrical idea. At the back of my mind I was a bit worried about my daughter who had informed me she was packing in her job as a physio in a London hospital to go travelling for 6 months in the Far East. So basically it’s about that. I played it to my wife and she spotted it straight away.

What can you tell us about some of the other new songs?

They all came pretty quickly which was handy! I’m not one of those guys who write all the time. Because my stuff is all pretty simple I think it’s best not to force the issue then things come pretty fresh. My own personal favourite is ‘One in a Million’ which has obvious Motown influences. Again I love Richard’s string arrangement which captures the mood perfectly. ‘Life’s Too Short’ is going down really well LIVE. Upbeat and fun.

As you’ve said, you also managed to get Ray Charles’ old collaborator, Richard Niles to work with you on the album…. tell us about that.

Richard did some work on my last album ‘Good Feeling’ and he is great to work with. He works very quickly and has great musical sensibilities. I think he understands where I’m coming from musically and has all the musical knowledge and background to make it happen.

Where do you think this album fits into the Paul Carrack canon?

I think it’s my best but I would say that wouldn’t I? One of the benefits of going straight into the studio on the back of all the road work is that my voice was in good shape and I think these are the best vocal performances I have on record to date.

You’ve achieved a lot in a glittering career… what’s left t for you to do… what are your plans for 2014?

I’ll be touring at least until May including a spell in Eric’s band in February when we go to Japan and the far east. That’s enough to think about for the moment.

Finally and putting you on the spot… can you let us know your, say, five favourite soul songs of all time – the ones that maybe have influenced and inspired you….

OK – let’ see…. try ‘Midnight Hour’ by Wilson Pickett, ‘Ain’t Too Proud To Beg’ from the Tempts, ‘Song For You’ by the great Donny Hathaway, Arthur Conley’s ‘Sweet Soul Music’ and ‘I Was Made To Love Her’… the Stevie classic.

PAUL CARRACK’S new album ‘Rain Or Shine’ is out now. Find out more @ www.paulcarrack.net and get an insight into the album by accessing our Reviews pages.