COME AND GET IT WITH ELI REED 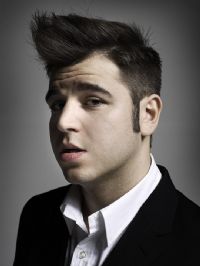 One of 2010’s best soul albums so far has been ‘Come And Get It’ from Boston’s ELI ‘PAPERBOY’ REED. The music’s passion and commitment has found favour right across the spectrum from died-in-the-wool soul anoraks right through to straight-down-the-middle Radio 2 listeners. Indeed the album was “Record Of The Week” on the station – quite an accolade for music that was also being played in underground, esoteric soul clubs. ELI has just finished a long UK tour and we just had to speak with him. We began with the obvious question about that “paperboy” nickname…

“Well, my grandfather, back in Boston, used to always wear what we in the US call a paperboy hat…. I’d wear it too and was given that nickname at an early age and it kinda stuck and I’ve never thought of dropping it….”

Your Boston background is interesting. I guess it was a traditional white, middle-class upbringing… so how come you were drawn to blues and soul?

“Yes, I guess you could say my background was middle-class – but that doesn’t matter. How does anybody get turned onto the music they love? There’s the records, there’s the music of your parents. I don’t think race has anything to do with the kind of music you love or want to make.”

You left Boston first for Mississippi, then onto Chicago before pitching up in Brooklyn … how did that affect your musical ideas?

“I moved down to the Mississippi delta to work for a radio station. Then I went to college in Chicago. I wasn’t going to these places like it was some kind of musical pilgrimage. I wasn’t even planning on becoming a musician at that point. I was studying sociology at college and I wasn’t really sure what I was going to be…but, yes, I did pick up on the musical vibe of those places.”

Your first two albums were independent. Your first was all your own work and the second came out on the small Q Division label. You’re now signed to a major label – Capitol… What was the attraction of the big company?

“Well, a major label gives you the opportunity to have a record that is distributed everywhere in the world and to be promoted properly. They also have the budgets to allow me to make the kind of records I want. So signing with Capitol was a no-brainer. I had to do it!”

The album is produced by MIKE ELIZONDO- who has worked with people like EMINEM and GWEN STEFANI… Did Capitol ask you to work with him for “big name” impact?

“No. I choose MIKE as producer. He’s a smart guy and a great musician and he wanted to work with me – so it made a lot of sense. He bought a lot of things to the table.”

‘Come And Get It’, indeed all your albums, have an authentic retro soul sound. In your music we can hear what seems to be all kinds of influences – Wilson Pickett, Joe Tex, Sam Cooke, Ray Charles and so on. Are these artists and their music conscience reference points for you?

“No- not at all! I don’t think you make a record and say I want this song to sound like this other song. That’s just counter-productive. We didn’t try to make anything sound like anything else but ourselves. We just let the songs develop on their own. We don’t do pastiches or homages. Our sound is just the way the music comes out.”

The album’s title cut – ‘Come And Get’ – is being touted in some UK Northern soul clubs as some kind of long-lost 60’s gem. Indeed some DJs are covering it up to give the track even more exclusivity. What’s your take on that?

“It sucks! I think it’s disgusting that DJs operate dishonestly just to boost their own egos and kudos. It’s the artist that make the music and it’s to them that the credit should go… not to the DJs who just play the records. It’s dishonest.”

And the future… what next for the Paperboy?

“Well, I’m going to carry on working and promoting this record and making more albums for Capitol……”

‘COME AND GET IT’ by ELI PAPERBOY REED is out now EMI, Capitol…. go to our review pages for a full album review….

Tags: COME AND GET IT WITH ELI REED