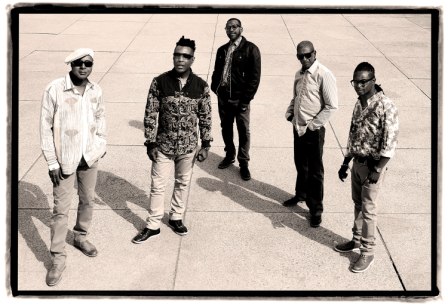 Without doubt one of this year’s best soul singles has been ‘Romantic’ from the BRITISH COLLECTIVE. The song has been heavily rotated on the best soul stations since its release and little wonder! It’s a tight, modern soul groove with just a hint of New Jack Swing about it and the various mixes have given ‘Romantic’ real longevity. The modern soul crowd are loving the “So Sweet Remix” while the house heads are connecting with both the Booker T Klub and Paris Cesvette mixes. The song’s class and quality comes chiefly from the experience and talents of the five members of the Collective…. ‘cos, as you may well know, the band aren’t new kids on the soul block; rather the group is made up of five of the UK’s top soul men – JUNIOR GISCOMBE, OMAR, DON-E, NOEL McKOY and LEEE JOHN. Between them the quintet have sold millions of records and recorded countless classics and now, working together, they’ve crafted another gem. But why did they decide to join together? What took them so long to collaborate? Who’s the guiding light? Is there more music on the way? So many questions … so we tracked down Mr Giscombe to enlighten us and naturally we began by asking how the “Collective” came about…..

We (Omar, Don, Noel, Leee and me) have always talked over the years and been friends, so our getting together is more like a bunch of mates having a good time making music. We were all at Carl McIntosh’s birthday party and we learned that Don-e was making his album ‘Little Star’ and he said it would be great to have us on a track. The idea was great, yes, but we were all working so how would it work? He suggested that we do our own vocal in our own studios and send them to him. It was so much fun and ‘Spiritual’ our first collaboration was born. (‘Spiritual’ is a key track on Don-E’s ‘Little Star’ album… see our reviews pages).

After the Don-E collaboration whose idea was it to take the concept further?

That was mine, I heard the sound and knew the style was right and in fact I didn’t want ‘Spiritual’ out as a featured artist scenario but I’m glad it did as it made people’s ears perk up. I knew from when we started that there was something very unique going on. We all talked before starting to find out how each felt about taking it further and once we knew we were on the same page we discussed a direction for an album. We spoke about producers and other writers we’d like involved and the ethos of the unit and then we had to check ourselves You see, we all produce and write and if this was going to be an authentic organic album we should do it ourselves. So we started by us all delivering 2 each songs then taking it from there.

OK you all agreed…. there are five of you in the studio. What happened next? Did anyone assume leadership… were there any ego issues?

During the recording of the album maybe 3 of us were together at any given time in the studio, because with new technology (and as I mentioned before because of work commitments) vocals would be sent and any overdubs needed, the guys would come in and do them later. ‘Romantic’ – the single – was Don’s idea. We all loved it but by the time everyone started putting their thoughts in, it changed the song for the better. Egos? I can’t see The Collective being led by one person as we all have strong personalities; this is truly a collective effort. The ego thing was left outside the studio…. so we had none of that going on.

OK… so how did you decide who would sing what… was anyone designated as the “lead” singer?

The songs were written in keys we knew the others could sing and express themselves through, so musically it was about making a bed to lie on for the voices to feel comfortable. That was Don’s and my department. From the beginning we said there should be no one person doing all the leads as that would bring the ego mind set into play but if we all sang and played then we would be showing the true spirit of our coming together. Also not all of us sing on all tracks, we let the song dictate who should sing what, to the point where we have some special guests in the mix to fully showcase the songs.

How would you describe the sound you achieved on ‘Romantic’… did you have a template to work from?

Our template was what went before. We all wanted it to be distinctively British so chose to record at home… that was very important. We wanted things to be song led not groove based, danceable but singalongable too. You know, all the right ingredients that made us all successful in the past. I would describe our sound as being familiar to an older audience, brand-new to the young…….History repeating itself. All of our successes have been secured by staying true to who we are as people and going through the ups and downs of an industry that doesn’t suffer fools gladly.

You keep mentioning the album… what can you tell us about it and when will it be out?

We’re in mix mode right now, hoping to complete by February but we won’t rush it. We want it to be right. There will be eyes raised, in a good way I think, as on a few tracks we move the sound and style of song writing further forward fusing our reggae roots with R&B. We also have quite a few guest artists from the UK appearing on the album and there are two covers both integral to the band. We’re all very excited about bringing this out as we believe it will be a game changer…….

Is all this a one off project and what can we expect long-term…. will you all be pursuing solo careers and still work with the collective?

I think that depends on the people as to whether or not they want more from TBC. We want it to be on-going as this project to us is about a movement, our story being told, and its importance to our musical heritage. British R&B should be given its rightful place in British Musical History. British soul goes back to the 60s and 70s with The Real Thing, Cymande, Osibisa; then 10 years on in the 80’s acts like Lynx, Imagination, Phil and Galaxy, Central Line, LOTW… I could go on, it all affected the WORLD. So yes, there could be more to come from us as the job has only just begun but we are all individual artists in our own right and have careers away from TBC and I can’t see that stopping. What we’re trying to achieve together is something that this country has never seen before. We are all committed to seeing it through and as TBC would say….. It Can Only Get Better!