CHRIS YOUNGBLOOD’S STILL IN LOVE WITH YOU 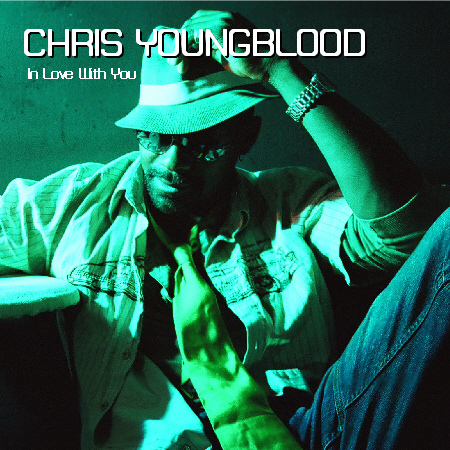 In a relatively short space of time PHIL DRIVER’S Cambridgeshire- based Soul Unsigned label has made huge advances. They began issuing EPs on unsigned, indie soul artists; then moved to full albums. After that came critically-acclaimed CDs of music from more established indie soulsters and more recently PHIL has allowed some top DJs to compile alums for the label. Now SOUL UNSIGNED is about to take another giant stride when it releases its first full single artist album. Said artist is CHRIS YOUNGBLOOD and the album’s called ‘In Love With You’. The set’s title cut has already appeared on a Soul Unsigned compilation album. It’s smoothly soulful – totally contemporary but with its feet, respectfully in the past. We needed to find out more about the honeyed-voiced MR. YOUNGBLOOD so we tracked him down to his Los Angeles home, where we began by asking him to fill us in on his background….

“I was born in a very small Californian town called Corcoran and, I started out singing with my brothers and sisters in our church choir. My mother was the church choir president so basically we had no choice but to be in the choir! Of my 8 siblings, and aside from my mom, I was the only one with the gift of singing. The others could carry a tune but didn’t carry that ‘lead’ characteristic. Once upon a time my mom made me sing in front of 400 or more people at a church event. I may have been all but 10 years old or younger at the time. The experience frightened me so that I spent the next couple of days in bed sick because of it. I guess it was my nerves. And I told my mom that I didn’t want to be in the ‘front’ anymore. And so as time went on, she kept me in the background with the rest of my siblings and other older kids from choir were appointed lead. Well, that didn’t sit well with me either and that too made me sick. So I vowed from that day on that I would always be in ‘front’. And I’ve been there since….”

Who, then, were your musical influences?

“My influences are all the older cats that my parents listened to. Not that today’s artists aren’t any good, it’s just that today there are a lot of artists with no substance and I try my hardest to never fall into that realm. When DONNY HATHAWAY sang ‘Giving Up’ or even his own rendition of STEVIE WONDER’S ‘Superwoman’…I damn near cried like a baby at just the sound of his soul pouring out over the airwaves. It’s the same when MARVIN sang ‘If I Should Die Tonight’ or when OTIS sang ‘Cigarettes and Coffee’. The emotion that pours from their souls on those songs just overwhelms me. And then there’s PRINCE who I absolutely can’t get enough of. I’ll always be a fan and will always be inspired by him. But if you asked my parents what really set it off for me, they might both say it was MICHAEL JACKSON. And that’s because I probably spent the bulk of my childhood dancing around like MJ. Even while in college …”

You’re based in Los Angeles now, aren’t you?

“Yes. Corcoran was real small place Mostly agriculture…cows, hogs, horses, tomatoes, cabbages, oranges…you name it. So it was hard to figure out what you wanted to be other than a farmer. As soon as I graduated from high school, it took all of 2 days for me to decide that Corcoran was way too small for my big ambitions. So I moved to San Jose California where I continued my schooling and my athletics as a track & field hurdler. While in San Jose I sang at a few shows but mostly to the young girls I met while in college. But I still didn’t see music as my dream. Only as something I knew how to do well. I then, reluctantly, moved back home for a spell. I eventually impressed the track & field coaches at one of the Universities in Los Angeles (Cal State Northridge) and was recruited to go and live there and continue my education and athletics. While there, I also took to the stage at every talent show around the town. I befriended a guy who figured I’d have more use for his keyboard than he did and he gave it to me. I began producing on the keyboard whatever I could. As time went on I kept with the music and met a few producers on the way. I also realized I was no longer a big fish in a small pond anymore either. Los Angeles was such a big pond and I was simply a tadpole trying to become something.”

How did you start recording then?

“Well it was after I did a little background work on stage for MELBA MOORE back in 2000 in New Jersey. The event was celebrating PAUL ROBESON. She wouldn’t know who I was today, but that experience – being on stage with someone I grew up listening to was a powerful moment for me. It was shortly after that I wrote and produced my very first CD entitled ‘Youngblood’.”

So ‘In Love With You’ is your second album… how did it come about?

“Yes, ‘In Love With You’ is the second release for me. This album originally came about in sections. I met and befriended a New York native JOE AUGELLO who had moved to Los Angeles to jumpstart his own career as both a guitarist and producer. He stumbled upon a web post that I had put out and he came to see me live. He invited me to come play with his band and I obliged. Soon after, he approached me with a piece of music he had written 10 years before he’d met me, which would later become the song ‘In Love With You’. The band parted ways after a nice run of free shows, but JOE and I hung in there and recorded a few more tracks together. After our stint together, I reached back out to my good friend and producer DAMIAN VALENTINE and we put together a solid schedule for recording and together compiled a nice selection of tunes. Over the course of a year I had a complete package for my next album (which I was going to called ‘MISTA YOUNGBLOOD … A Collection of Songs’.”

Why, then, did you choose ‘In Love With You’ as the title track?

“Well, PHIL DRIVER of Soul Unsigned loved the song and put it on his Soul Unsigned, Vol. 3 compilation and it soon began receiving some nice airplay and reviews. It became kind of obvious that ‘In Love With You’ should be the title track of the album. PHIL and I agree that the song is a perfect summer vibe and just a good title for an album.”

So, how do you get involved with PHIL DRIVER and SOUL UNSIGNED?

“My involvement with PHIL DRIVER came about through a production team who moved to Los Angeles from Philadelphia. They were starting a new label and were looking for a face and a sound to bring it to life. I reached out to the label and immediately we went to work on an EP. Eight songs later, the EP was recorded, but our relationship would be short lived. It was through the production team, however, that I was paired with the UK’s PHIL DRIVER. When PHIL and I began corresponding with each other, it felt almost as if we were long time friends – just catching up. It was then that I thought in my head…”this could be it!” And sure enough that little crack in the door opened right up and we’re on our way!”

What are your hopes for the album …and your future?

“My hopes for this album are simple…I want people from all over the world to simply enjoy themselves while listening to my music. Once I was asked what I thought success was and I answered back, “to me success is completion.” The CD is complete and now it is in the hands of the public to either take to it or not. I write, sing and perform for the sheer enjoyment of what it all does for my soul. My hopes are that people can see that. If this were something to do for the money, I would have given up a long time ago. So for my future, I just want to continue to write and sing and perform, first for myself (which is where my happiness comes from) and then for the audience who desire to hear what I do.”

What’s your take on the current soul scene… and just how difficult is it for a real soul singer to get that elusive break?

“The current soul scene seems to be made up of “here today gone tomorrow” pop acts. Basically they just make money for the big record labels. Because of that, in my opinion, the real soul singers whether signed or not, do not have a fighting chance. It’s hard enough trying to captivate an audience, and trying to do it in a diluted industry is even harder…even for the more established artists. But there are guys like RAHEEM DEVAUGHN, MUSIQ SOULCHILD, MAXWELL, KEM, ANTHONY HAMILTON and DAVE HOLLISTER who are still keeping soul alive. And there are the women who are doing the same…SYLEENA JOHNSON, TEEDRA MOSES, MARY J. BLIGE and JILL SCOTT. But it seems that it’s mostly the teens buying music today, so the market for ‘us’ is difficult to find. Most of the people from our age group are having to turn back to the oldies just to get that ‘soul’ fulfilment. So, unless a real soul singer is looking to a small indie label with loads of time and money to spend on said artist, then it is very difficult and frustrating trying to get an elusive break.”

CHRIS YOUNGBLOOD’S ‘In Love With You’ is released on SOUL UNSIGNED RECORDS on July 5th and is available from all the usual outlets.

Tags: CHRIS YOUNGBLOOD'S STILL IN LOVE WITH YOU