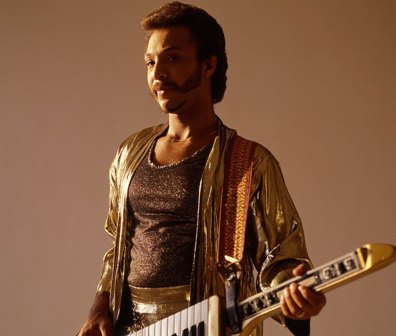 Cincinnati-born CHRIS JASPER was, of course, a key member of the Isley Brothers in their pomp. From there he enjoyed considerable success with Isley-Jasper-Isley ….Chris’ keyboard, vocal, song writing and production skills working beautifully with the talents of Ernie and Marvin Isley – as indeed they’d done in the work of the Isley sextet. Since then, classically trained Jasper has forged a successful solo career running his own family-based Gold City Records. Gold City has issued a series of acclaimed CJ albums and a string of chart riding singles – the latest being a cover of Sam Cooke’s ‘Nothing Can Change This Love’. The track is taken from Chris’s upcoming long player ‘For The Love Of You’ – a covers collection on which Chris offers his versions of three old Isley tunes alongside five soul and pop favourites – including the aforementioned ‘Nothing Can Change This Love’. Despite the lockdown we tracked the genial Chris down and he was happy to talk about the album… the obvious starter being…. why a covers album?

Well, I originally covered our Isley song ‘For The Love Of You’ last September (it was specially recorded to be son, Michael’s wedding song) and I felt that it would be a good idea to cover a few more of the songs that I wrote for the group. At that point, I then thought it would be nice to cover some other popular R&B and pop standards and bring my own sound to those classic songs.

So it all started with ‘For The Love Of You’… one of your songs. However there’s long been confusion about the credits for that song… all six of the Isleys are credited and I read somewhere that Rudolph Isley says he wrote it for his wife Elaine…. causing a few internal band arguments! Can you clear things up? While working on ‘The Heat Is On’ album, Rudolph had an idea for a song called ‘How Lucky I Am’ for my sister (and his wife) Elaine. When he first brought the idea to me, I didn’t think that it was a strong enough idea for the album, so I wrote ‘For The Love Of You’ instead. Rudolph’s commentwhen I played ‘For The Love Of You’ for him was “That ain’t my song” along with some other derogatory comments about the song. Eventually, I worked on his idea and ‘How Lucky I Am’ appeared on the ‘Winner Takes All’ album. He must be confusing the two songs.

Now the new album – could you talk us through the songs…. why did you choose those particular ones? I have always wanted to redo some of the songs I wrote for the Isley Brothers when I was with the group. My wife, Margie, also picked some of the songs that she felt I could bring something new to using my style and arrangements like I did with songs like ‘Summer Breeze’ and ‘Hello It’s Me’ for the Isleys. For this album, I also covered Marvin Gaye’s ‘God Is Love.’  Marvin has also been a big influence on me.

There’s the Sam Cooke song too. I guess you’re a big fan of Sam Cooke? Yes, I am. I was a fan since I was a kid and I still am a big fan of his music now.

And what about Van Morrison…. some of your fans might be surprised that you recorded his ‘Have I Told You Lately’…. I was first made aware of ‘Have I Told You Lately’ when Rod Stewart recorded it. I liked the song the first time I heard it. The song was on my wife’s playlist. Margie said that she thought I could do a nice version of it and after working out the arrangement, I felt it was a good choice.

How did you set about making each song “different”… how did you put your own stamp on them? I approach the arrangements as if I had originally had the idea, and what it would sound like if I had written the song. I used the chord structures I developed during my career, using my classical training, and then added my vocal style.

Which one is your favourite? I think, because I have always been such a big Sam Cooke fan, and the way the song speaks to true love (which I have found), “’Nothing Can Change This Love’ is the standout to me. But I truly do love the way the whole album came out.

With the coronavirus problem growing – how will you promote the album and, generally, how is the crisis affecting music in the US…. Before the crisis took full effect, we had already started preparing ‘Nothing Can Change This Love’ as the single, so we plan to promote that for a while. We were intending on releasing the album at the end of April, but it doesn’t seem appropriate right now with all that’s going on, so we may be pushing the release into May. The crisis is unfortunately affecting everyone, including the music business. Shows are cancelled; clubs and restaurants are closed, so it will affect income streams for many performers. I’ve been posting some of my inspirational music on my social media for my fans, which they seem to appreciate.

And what about your next project? We are considering releasing some compilations this year, gospel, funk, etc. I will also be working on new music for a 2021 release. I will be posting everything on my social media and my website, www.ChrisJasper.com.