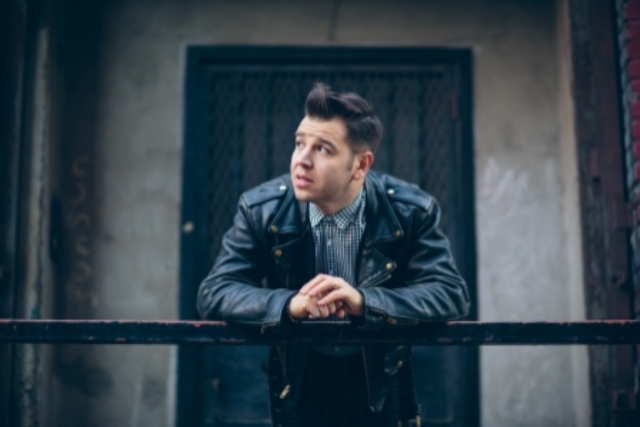 ELI “PAPERBOY” REED was one of the first of the new generation of “for real” soul singers and he’s all set to launch his next t album ’99 Cent Dreams’. We last spoke back in 2010 when he was riding high with his long player ‘Come And Get It’. That album had the backing of the mighty Capitol label and Eli’s next LP was out on Warner Bros… before long, though, he was back working for the indie set up Yep Roc – also the imprint for ’99 Cent Dreams’, so when we hooked up again we wanted to know just what happend at those major labels….

That’s am big question! A lot happened in between 2010 and now, some good and some bad. Unfortunately, major labels these days can be quite topsy turvy. Especially a few years ago, there was a lot of bureaucratic upheaval that went on, with people being shuffled around to different positions or losing their jobs altogether. It was a tough time for artists like myself because no one at the majors wanted to take a chance to push for a big campaign since if things didn’t pan out they could easily be fired. Ultimately I ended up getting dropped from Warner in 2014 after a lot of my champions at the label either lost their jobs or were moved to different areas. I was quite disillusioned with the whole process and ended up channelling that to make the “My Way Home” album that came out in 2016. I made that record on my own dime and was put in touch with Yep Roc by my old friend Nick Lowe. They loved the record and were happy and excited to be in business with me which was a feeling I never really got at any of the majors I was on. In the end it was a tough process and I’m just now coming out the other side of it.

Try to define the differences between major labels and indie ones…. in retrospect do you regret signing with those big labels?

I still say that the answer is no and if I got the chance to work with a major again I most likely would. I think the major labels can provide funding and infrastructure that just about nobody else can match and if you’re looking to make a big splash as an artist, that’s the way to do it.

Now the new album… ’99 Cent Dreams’… I believe your new daughter had a part to play (congratulations, by the way)… explain please

I took some time off to be home with my daughter after she was born in the fall of 2016 and I (stupidly) though that could also be time that I could write my new album. As it turned out, being home with a baby is not conducive to creative endeavours so once she started day-care at the beginning of 2017 I was able to really get down to business. Becoming a parent certainly changes everything, and it definitely changed my outlook on making music. Thankfully I had a lot of great collaborators close by in Brooklyn that were up for coming over to the house during the day while she was in school and writing songs.

’99 Cent Dreams’ was recorded in Sam Philips Memphis studio – tell us a bit about that experience.

I wanted to work with producer Matt Ross-Spang and Matt bases himself out of Sam Phillips. He’s Memphis born and raised and has worked with the Phillips family to bring the studio back to its former glory. It’s an incredible place to work, but I really went there because I wanted to work with Matt, rather than wanting to be in Memphis. You can’t help but be effected by the city and everything about it, though.

What kind of sound were you aiming for… have you succeeded?

I just wanted to do the songs justice. I wrote everything for this album on either acoustic guitar or piano so everything arrangement wise from myself and the band we came up with in the studio. The idea was really to just let the songs shine as much as possible and be unfussy about the production. If it sounded good the first time around we didn’t think twice about doing it again! I absolutely think we succeeded and I’m incredibly proud of this LP.

Tell us about the musicians on the album….

The bass player and keyboard player are my long-time band members and good friends Michael Montgomery and J.B. Flatt, respectively. I’ve been playing with Michael for almost 15 years now and with J.B. for more than 10 so they both know what I’m after. My regular drummers Noah Rubin and Attis Clopton weren’t available for the sessions so we ended up using one of the producer’s favourite drummers Ken Coomer. Ken played on a lot of the early Wilco records and is just an intensely musical drummer. His playing was perfect for the songs and I loved working with him. We all just set up together in the room. I would start playing the songs with just myself singing and playing guitar and gradually everyone would kind of fall in and find their parts. The horns were overdubbed and are played by some incredible Memphis based horn players who work a lot with Don Bryant and the Bo-Keys. Marc Franklin on Trumpet, Kirk Smothers on Tenor and Art Edmaiston on Baritone. The arrangements we all came up with on the fly and they did a fabulous job.

And I think the backing singers are The Masqueraders… are they the same of 1975’s ‘Everybody Wanna Live On’ fame… how do you get them on board?

The same! Not only that but “I’m Just an Average Guy” and many other incredible records. Matt Ross-Spang and I had discussed working with The Masqueraders on this album and he reached out to their producer Bobby Manuel. They’ve all been living in Memphis since the 60s and still sound incredible. The two longest running members, Tex and Harold have been singing together since 1959 so this year it’ll be 60 years! Sam Hutchins has been friends with them for that long, but he started singing with the group in the late 60s so for him it’s only 50 years…When you hear guys like that sing together around a microphone, there’s nothing that can top it

Why did you choose ’99 Cent Dreams’ as the album’s title track?

I felt it was evocative of what I was going for. The idea behind ’99 Cent Dreams’ is that the things that don’t cost a lot (or maybe don’t cost anything) but still can inspire love and joy. I think a lot of that feeling runs through the songs on the whole record and I felt that ’99 Cent Dreams’ made sense as the title.

Parts of your Coulda Had This’ sound a lot like ‘People Get Ready’ – is that intentional?

Hah, a lot of songs sound like ‘People Get Ready!’ It has a very well-used chord progression. Certainly not intentional, but I’m certainly inspired by Curtis Mayfield and his writing. Actually, if anything, ‘Coulda Had This’ sounds like a later, post-Curtis Impressions single called ‘The Same Thing it Took’ to me

What other tracks would you like to draw our attention to…..? Which ones are you particularly proud of?

I love ‘Trying’ as I think it really goes back to the kinds of records I was making when I was starting out. Also ‘Said She Would’ was the first song I wrote for the album going back a few years and it still has a special place for me.

Will you be coming to the UK to promote the album?

That’s the plan! We’ll be back in June for a few dates and a longer tour this fall.

OK … just to end…. can you tell us your three favourites songs of all time – the ones that have influenced and shaped your music!

There are really too many to list, but I’ll you a few that I love right now: Charlie Brown & The Violinaires – ‘The Whole World is Watching’…..The Rance Allen Singers – ‘Let’s Get Together and Love’ ….Lionel Robinson – ‘Stepping Out’