CHATTING WITH CHANTE Part One 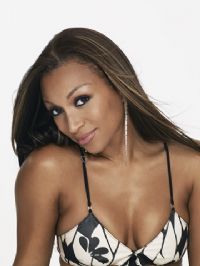 The supremely photogenic Californian-songbird, Chanté Moore – now 41, but looking and sounding as good as ever – first came to the attention of record buyers in 1992 with ‘Love’s Taken Over,’ a hypnotic slice of groove-drenched sensual soul that was a hit on both sides of the Atlantic. Moore, who married singer Kenny Lattimore in 2002, hasn’t made an album in her own right since 2000’s ‘Exposed’ so the recent arrival of what is only her fifth studio opus, ‘Love The Woman’ – out now on Peak Records – has understandably generated a fair degree of excitement in the soul world. Here, she talks to www.soulandjazzandfunk.com’s Charles Waring – not only about her fine new record but, as will be revealed later in the concluding part of this interview, her early life, family, musical influences and much, much, more.

It’s been 8 years since your solo last album. What have you been up to?

I’ve been singing with my husband (Kenny Lattimore). We did one double album (‘Covered/Uncovered’) and one single album (‘Things That Lovers Do’) together. The first album was a tribute to the duet and we didn’t have any real creative freedom with it – it was remixed – so then we felt like we should really just play our own idea of what a duet between us would be. We did the original album and then the album turned into a double album because the record company asked us to do a gospel album, which would complement the R&B love songs. There wasn’t really a plan, as much as it just unfolded day by day and year by year and album by album.

What’s the story behind your new album ‘Love The Woman’?

You’ve reunited with George Duke, who worked on your very first album. What was it like working with him again?

Well, he’s like family so it’s always easy to work with George: he’s a great producer and he’s a great person. We have fun in the studio. Both of us wanted to get back in there together. We talked about it many times so we were excited to be able to do it.

You cover Minnie Riperton’s song, ‘Give Me Time,’ on the new album. Has she been an influence on your own vocal style?

Well I guess so. I admire her very much. I don’t try to imitate her but I definitely grew up listening to her songs.

You teamed up with Raphael Saadiq on ‘Something Special.’ How was that as a recording experience?

He’s crazy. Most people in the music business are and so we had a great time – we really enjoyed laughing, and he’s extremely talented. I loved the song so it was pretty easy and fun to do.

The title track is a collaboration with Jamey Jaz. What was it like working with him?

He’s extremely talented. He actually did a lot of work with Rahsaan Paterson and Shanice Wilson. He’s not as well known as he should be but he’s a really nice person that lives in Los Angeles. We’ve worked together quite a few times on a different couple of albums we put together before. So he’s just a good guy who makes good music. We like writing together and just creating songs even when there is no album.

Warryn Campbell also worked on the album with you – what was he like to work with?

Well he’s a Christian and I love his music in the gospel realm, like what he’s done with Mary Mary. What I love about working with him is that it’s more about good music than it is about being gospel or not gospel. He only writes good music and does great production too. The lyric content is poignant but not too far off to the left, ‘cos I think some of the songs that I hear now are a little bit discouraging – I wouldn’t want my children singing along to some of the things that are said in R&B sometimes nowadays, so I like a song that’s relative and relevant but not too far off – it’s respectful about what it’s saying but it’s still hip enough to be hip.

You cover ‘Guess Who I Saw Today,’ originally cut by Nancy Wilson. I wondered if you’ve ever contemplated doing a complete album of jazz-oriented songs.

I have thought about it. I think it’s one step at a time for me with that. I do love jazz – I always have, and I think it’s such a good feeling and that’s what I like about it. I don’t necessarily think that I’m a jazz singer but I like songs that make sense, songs that have stories and songs that make you feel a particular way when you’re singing them and hearing them. I like that song in particular and I’ve sung it quite a few years and always threatened to do it as a remake on one of my albums.

The CD bonus cut is a cover of an old, pre-Atlantic, Aretha Franklin song, ‘This Could Be The Start Of Something Big.’ What made you choose to record it?

I love that song. It was a song that I really heard a long time ago but it is straight ahead jazz and it is just such a fun song to sing live. She’s just so versatile anyway, and I love Aretha: she’s done so many songs that I’d never heard before. When I was younger I just thought it was all about from ‘Respect’ on but there are so many things she did before that song ever even came out.

(as told to Charles Waring)

‘Love The Woman’ is out now on Peak Records and is reviewed at www.soulandjazzandfunk.com

The second and concluding part of www.soulandjazzandfunk.com’s interview with Chanté Moore will follow at a later date.

Tags: CHATTING WITH CHANTE Part One