CHATTING IN THE SUNROOM. 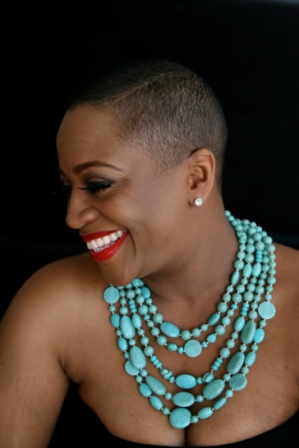 In the space of a few years AVERY* SUNSHINE has become a major soul player and her new Dome album ‘The Sunroom’ is garnering rave reviews from all quarters. No wonder … the album – a great mix of the up-tempo and quiet storm moments – is stuffed with future soul classics and Avery*’s gospel reared voice is being acclaimed as a thing of soulful beauty. The album’s officially out at the end of May and with a mini tour on the way, there’s no better time for SoulandJazzandFunk to join the singer in her sunroom and get to know her a lot better. First we wanted to know how the little lady born Denise Nicole White became Avery* Sunshine….

A few years back my partner Dana and I completed our first song entitled ‘Stalk You’ and Dana had one of his super talented producer friends produce a house mix of the tune. Well, the tune was picked up by a label and I was subsequently asked how I’d like my name in the credits. I blurted out, AVERY*SUNSHINE! That’s the absolute truth… honest!

You have a Gospel background. How important has Gospel been in your musical development, approach and style?

One of the first CDs that my parents purchased was the Clark Sisters. That was my introduction to recorded gospel music. It sounded like R&B. It was breathtaking. My earlier experiences with gospel was in the church with church musicians… live and in colour. The recordings I heard were on AM radio and did the music NO justice. So to hear this inspirational music recorded in this way was not only attractive to me but has lent to my love for making and recording Inspirational music.

You debuted in 2010 with your eponymous album –it was on your own label – Bigshine. Was it impossible to get any interest from any established labels –or didn’t you even try?

We didn’t really try very hard to do that in the United States. For the type of artists that we are, Dana and I didn’t feel like larger labels would understand what to do with us. So, we started our own label. Thankfully, we were later able to join forces with Dome Records which has proven to be one of the best decisions we have made.

How did the acclaim that album received alter your career trajectory and any previous perceptions you had of the music business?

The reception of the album was unexpected for me. It altered my trajectory in that I had to become an artist! If someone had asked me 10 years ago if I wanted to be an artist, I would have emphatically said “HELL NO”!!!!!! We did the first record as a trial. I told Dana that I would try it out and see what happened. Well, the record caught on and I now find myself a full fledged artist with all of the rights and privileges appertaining to! The music business was not as scary as it had been made out to be. The shift in the industry from major labels to indies was beginning and we were able to pave our own way. The indie route has definitely proven to be the way to go for us.

We were touring so much and working very hard to push the first record that we didn’t even notice the time!!!We realized that much of our success was, and still is, based on doing great shows and we spent a lot of timing honing and working to perfect them.

My copy of the album’s on a UK label, Dome… is that the same for the US and why not Bigshine anymore?

We still have our label which is now Bigshine Recordings ( f.k.a. Bigshine Music) Fortunately, we have been able to have licensing deals, which are not the traditional record deals. We essentially partner with a more established label in a region and they use their knowhow for their respective regions to support our work. For this record we have four licensing deals, Shanachie Records (US),Dome Records (UK), Sweetsoul Records ( Japan) and Suburban Records (The Netherlands).

Dana (“Big Dane” Johnson) clearly plays a big part in the Avery* Sunshine story… tell us about him….

There’s a lot to tell! In short….DANA, a California native, is a producer, a Grammy award winning writer,(“Get It Together” India.Arie), studio engineer, college professor, business owner, father, road manager, he’s worked as a stylist a time or two and he’s my best friend. There wouldn’t be an “Avery* Sunshine” without him. He believed in my artistry before I even knew it existed.

OK then, how did the pair of you begin putting this album together? What sound were you looking for –indeed how would you describe your sound? And who ultimately had the final call on things like what to actually include, the running order etc….

Our manager, Paul Ewing, told us that we needed to get an album done so that he could do his job! But it’s true and it makes sense. He needed something to manage! That is something that I have come to understand. Dana and I are supremely grateful to Paul for urging us to make this record happen. The only sound we were looking for was something honest and good to OUR ears. That’s it. That’s our formula. And who’s the boss??? Well, me of course!

The album’s a great mix of ballads and up-tempo moments –what do you prefer to sing?

Why, thank you. Truthfully, some days I’m feeling an easy laid back vibe and other days I wanna dance like Tina Turner. It just depends.

One of the biggest up-tempo moments is the poppy ‘Time To Shine’- tell us about that one… I can hear bits of Motown there and even the Beatles”Got To Get You Into My Life’.

This song is from a track done by a musical genius, Demien DeSandies, out of Philadelphia. He was introduced to Dana and I by none other than the BADDEST DJ in the land, DC Jazzy Jeff. Dem sent us the track ( there are no samples. He played EVERY instrument) and immediately I knew what I needed to write to it. It was truly magical.

Then there’s the lovely opener –’Love Won’t You Try’. There’s distinct Hi thing going on in there. You even name a check an Al Green song –was that a conscious thing?

Dana and I LOVE Al Green’s writing and production. Dana had been talking about an idea he had for a song. One afternoon he started playing and the words just came out of me. We didn’t intend to make an “AL Greeny” song or to try and copy. However, those things are just in you; those things that you love (and even sometimes hate) will show up in your work. We hope that if and when Mr. Green hears it that he will feel the love!

My favourite ballad is ‘Nothing To Something’my presumptuous guess is that this is biographical… am I right or should mind my own business?

It is definitely biographical. It took about 3 years to finish writing. I finally know what it’s like to be in……Ok… Now, mind your business ….. !!!

What are you hopes for the album? And where do you see yourself in say five years time?

I hope that people feel the love and hear the honesty in this album. I hope that people are encouraged to be their best selves. I hope that the music reminds people that we were created to shine and that the world turns with a little more ease when we are ALL shining. In five years I see myself sending my firstborn to college with NO STUDENT LOANS!!!!

Finally, one you’ve probably been asked hundreds of times before… why do you have a * at the end of your first name?

It’s a reminder to SHINE!!!

Avery Sunshine*s ‘The Sunroom’ is set for UK release on May 26th . There’s a full review in our archive. Avery* will be visiting the UK in June to promote the album. She’ll be headlining two shows; one @ London’s Islington Assembly Hall on June 20th, the other @ the Old Market in Brighton the following evening. The venues will provide more details.