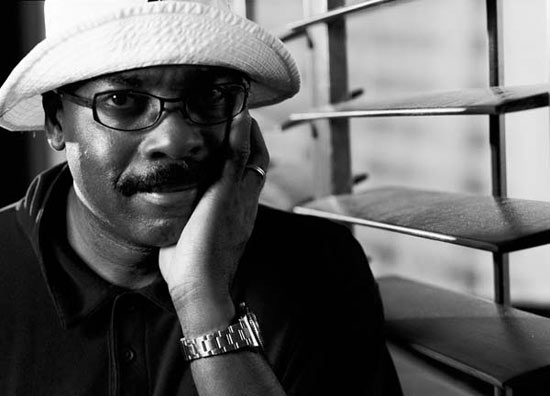 One of the most respected and prolific drummers in the neighbouring worlds of jazz, soul and funk music, New Jersey native HARVEY MASON (who was born and raised in Atlantic City) began his career forty years ago in the early 1970s.

He had a tough upbringing in an impoverished family but imbued with a strong work ethic he was fiercely determined, ambitious and aspired to self-improvement. A productive stint at college studying music led to Mason playing percussion, vibraphone and eventually drums in several jazz bands before his found his vocation – making a living as a session drummer on America’s west coast. He played on Donald Byrd’s seminal fusion bestseller for Blue Note, ‘Black Byrd,’ in 1972 and appeared on all the trumpeter’s sessions helmed by the Mizell brothers, Larry and Fonce. In ’74, he was asked by keyboard maven, Herbie Hancock, to join his new band, with which he aimed to fuse jazz with funk and reach a larger audience. What resulted was another bestselling jazz crossover album, ‘Head Hunters.’

To his amazement, the modest Mason was offered a solo deal by Arista boss, Clive Davis, during a Brecker Brothers’ session in 1975 and over the next several years the drum maestro served up five, very varied, albums for the label (while still working long hours as a session drummer). Now, in 2011, his vintage Arista titles ‘Marching In The Street,’ ‘Earthmover,’ ‘Funk In A Mason Jar,’ ‘Groovin’ You,’ and ‘M.V.P.’ have all just been reissued for the first time via Soulmusic.com and in an exclusive and revealing in-depth interview with SJF’s Charles Waring, the Fourplay co-founder and sticks man talks about his solo albums as well as other fascinating aspects of his long career…

What circumstances led you to sign with Arista Records in 1975?

I was working on a record with the Brecker brothers. I was in the studio and (Arista boss) Clive Davis came in and I met him for the first time. He asked me if I had thought of being a recording artist. I said not really, but I had a couple of demos I was working on and he asked me to send them. I sent them and he gave me a contract. What was ironic was that I had just finished reading his book (his autobiography) so I was really excited but I didn’t realise that I might meet him. But it was really interesting, his book, and then I met him. Things just fell together.

Going back to your first album, 1975’s ‘Marching In The Street,’ what can you recall about the sessions and what did you want to achieve with the album at the time?

Personally, my mentor was Quincy Jones. I never felt the drums were an out-front instrument where people and the masses would just want to listen to drums and really understand it and get excited about listening to drums because there’s no melody and no harmony. All there is just rhythm. So I set up to make musical albums and that’s what Quincy Jones did. I used the same canvas and format that he used for creating records to show my producing, my playing and my ability to bring together musicians and create great music that makes me shine at what I do. That was my goal, to create great music to listen to and not focused on drumming per se because listening to drums is boring for me. By then the great drummer bands had passed – like those led by Art Blakey and Buddy Rich. They focused on songs and playing with the band. They didn’t just focus on drum licks and solos. It was about making the music happen. I produced all my own albums and drummers make good producers because they listen to everyone and they react and so you just get in the habit of doing that.

Were you aiming for a particular audience with your first album and with the second one, ‘Earthmover’?

I think it was just thinking more about my youth and my growing up and my development. ‘Marching In The Street’ had to do with when I took part in city parades in marching bands when I was in the drummer/bugle corps. So I was paying homage to that part of my life. I was very raw and didn’t get polished until I joined the bugle corps. The songs derived from incidents and feelings that I had growing up. So that’s what that’s primarily about. I don’t think I had much direction except that they (the record company) wanted me to crossover. They didn’t want it to be a jazz album so it wasn’t a straight-ahead jazz album in any way, shape or form. I have been involved in so much music that was crossover. It was the beginning of crossover music going on back in the Blue Note days in the early 70s. I made a whole bunch of records at Blue Note with Donald Byrd and Bobbi Humphrey so I was definitely aware of the audience and subsequently the audience was aware of me because at that time the recording artist and the people that played on albums received a lot of notoriety. DJs at that time would name the song and name the musicians that were on the records. It was fun so I was aiming towards that audience that was familiar with me and hoping that they would support me as well as a leader.

Your third LP, ‘Funk In A Mason Jar,’ was a pivotal album for you, wasn’t it?

It was definitely a large-selling record. I don’t know if I recall it was pivotal. I never really looked at them like that. I just made them and continued to make them but that album received a lot of critical acclaim. I think it boosted my ability as a recording artist.

What memories do you have of making that album?

It was 37 years ago so the memory is very, very foggy. I used the same formula as on my previous albums. I remember a couple of songs came from Kenny Loggins. I hired an arranger for a couple of songs. I’d worked with Jeremy Lubbock on Minnie Riperton’s records and I called him and asked him if he would arrange a couple of songs and we arranged one together. I used the same formula as Quincy (Jones) because it had been successful. I chose some great songs. I had some of the guys from the Tuesday Night Baked Potato Band playing. We played some songs with Lee Ritenour and that crew and Patrice (Rushen). It was a bunch of different kinds of music and I produced it and got great performances from everyone. I think George Benson might have been on that record as well.

Yes, he was – he played on your version of ‘What’s Going On’ by Marvin Gaye.

Yes, I used the same formula that they used to record his (George Benson’s) records. His records were first takes. The ‘Breezin” record was all first takes. We used the same crew in the studio, the song format, the ideas, the songs, and we started playing it and that was it. So it was all live and great and a lot of fun and it was not complicated. It was just a matter of putting the right people together and playing.

Keyboard player Jerry Peters played on the album with you. What attracted you to working with him?

I’d been working with Jerry since 1969 when I first moved to Los Angeles. I was out there one year before graduating from school and I met Jerry. He heard me play in a club and we became friends and he invited me to work with Jerry Butler and then Isaac Hayes. I was helping him arrange and he was doing a lot of Blue Note stuff. So I worked with him with the Sylvers and all that stuff and he was using my songs and we became good friends. He was a great musician and that’s why I ended up using him on the album.

Given your session commitments, did you take the album on the road?

No, I may have done one or two concerts. We went on a little tour. I made albums but I wasn’t really interested in being a big artist and going out there and struggling with that because I had a pretty large band with me and it was tough to take that kind of band on the road. But we did the west coast. If the money didn’t warrant being on the road, then I generally didn’t go because I really wanted to record. That was what I set out to do in my life and my career and I was so happy doing that. Everything else was a bonus. I was happy being in the background and recording and becoming an artist was just something that happened by chance. If it wasn’t financially feasible to do it then I didn’t want to pay out of my own pocket to go on the road and perform. I didn’t tour much at all. Very rarely.