BY GUM: The Ralf Gum interview….. 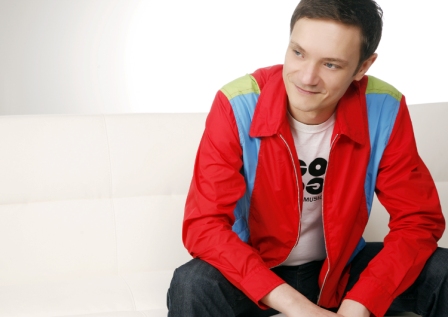 German–born RALF GUM is at the top of the soulful house tree. His productions, mixes, collaborations and DJ sets have won him world-wide acclaim since he started out in the 1990s. Now residing in South Africa, he’s also released three albums under his own name. The latest, ‘In My City’ (see our reviews pages) is a masterwork in the potential of soul-based dance grooves… little wonder it’s drawn praise aright across the soul spectrum; from the modern crowd through to the house heads. As usual Ralf uses a stellar line up to help him flesh out his ideas and there’s no bigger name in this cast list than South African musical icon, Hugh Masekela. With such a great buzz on ‘In My City’ we needed to know more about our Ralf….. Linking up, we began by finding out a little about his background…..

I grew up near Würzburg, a small town in the south of Germany, and don’t come from a musical family background. Everything started when music came calling in my early teens. Back then I preferred funky, jazzy and soulful music and started to search for and collect such records. As the collection grew I wanted to play the music to other people which led me to DJ-ing. The wish to make a professional career within the music industry started in my late teens, but I finished my studies as a civil engineer nevertheless. … Just in case I would not be able to make a living out of music…. I wanted to have something to fall back on. During my studies I spent as much time as possible in the studio and after finishing my studies, I felt that it was safe to make my passion a profession.

Tell us about the music and artists that influenced you as you were growing up…have your tastes subsequently changed?

It feels impossible to cut it down to just a few. I guess that I took influences from many genres and countless artists, which eventually and hopefully led to my own style. I have always been drawn towards soulful electronic music, while I always listened to various genres since I started out. But my taste has never really changed.

What about your first steps in the music business…. and how did your career develop to the position you’re in now?

I made my first steps into the industry as a DJ in 1990. My preferred sound then was clearly US-House but I had to play a mix of House, Nu-Jazz, Hip Hop and early Techno. Pure House Music nights were simply not understood at that time in my home town! Producing followed in 1993. A friend who owned a studio invited me to look over his shoulder while working. I was fascinated by his drum machines and samplers right away and soon started to invest in my own equipment. Reflecting on my whole career nowadays, it looks like I went through a slow but steady rise. I don’t mind this at all, as my skills had time to grow alongside my position in the music industry.

When and why did you decide to move to South Africa? How does living there affect your sound?

As a DJ I travel a lot, almost 20 years now and I saw many different places all over the world, but when in 2008 I came for the first time to South Africa, I felt a special vibe right away. The more I visited the country on subsequent tours, the more I fell in love with it and its people. My wife started to tag along on SA tours and we extended our stays whenever possible to get a better feel of life there. The more time we spent in SA, the more we felt at home. After a while it actually felt as if we were leaving home, when we flew back to Germany. In addition the friends we made in the country played a role in the decision, just as the fabulous music scene did. The weather is much better than in Germany, my studio rent is cheaper and of course the huge love for soulful music which exists in the country played a role, too. And surely everything surrounding an artist does influence his sound. “In My City” is the first album I fully produced in my new home. While I think that I kept my signature touch, there are definitely influences, which I would not have without being here.

Why did you set up your own label – GOGO Music?

My productions were signed to many different labels during the 90s, but I felt that none of the labels offered me a real long-term perspective. The House Music industry is mostly focused on single releases, back then probably even more than nowadays. Thus a track is often treated more importantly than the artist behind it. It was my wish to show my specific taste not only with a release here and there, but to build a platform which does reflect it completely. Hence I started the label and to work on a catalogue including releases of myself and like-minded artists. Of course we try at GOGO Music to give them, what I was missing from other labels, which is artist development.

Your music is certainly song-led – how do you develop your material…. where do the ideas come from… does the lyric or the rhythm and tempo come first?

I try to avoid following a certain formula in the studio. I often start with the groove – a strict routine would probably lead to similar results. Thus I am always searching for new ways of getting things done, which helps to keep the sound fresh. Sometimes the chords come first, on other days a bass line or a lyrical idea, but in general the rhythm is extremely important for me. Groove is the foundation and nothing works without it. Because of that, the harmony and vibe created by drums and percussion are always a main focus. Once the basic playback is done, I do involve other people in the process. The end product – most of the time –is a real group effort from all of the musicians, co-producers, singers and myself.

When you write a song, do you have a singer in mind who you’d like to perform it?

Usually the idea who to feature comes when working on a playback. The more the music progresses, the clearer and more specific this idea becomes. I often leave the lyrics to the vocalist or write with him/her. Thus it is important for me to choose singers who are great writers at the same time. Luckily I was able feature all those you find on the album now.

Now the new album… why the title?

Obviously there’s the Hugh Masekela (pictured) track “In The City” which gave me the final idea for the title, but that was more of a lucky coincidence. I wanted one which expresses that I have “arrived”. I intentionally put the skyline of Johannesburg on the cover as a tribute. South Africa is to date the most vibrant dance nation I know globally. I am grateful that I am allowed to be a part of it. I feel that spiritually and musically I now live in a place which I really call home. With this album and in general I want to play my role in raising more awareness about what’s happening in the motherland. The music scene in South Africa nurtured a lot of talent, especially in my genre, which is not yet discovered in other parts of the world.

What kind of soundscape were you aiming at?

When starting a new project, I just close the studio door to get into my own space. I don’t think about how the final product should sound like, but rather just let things happen. I just focus on the single track, which I am currently busy with, especially in its early stages. Somehow in the end my albums become consistent in sound anyway, as my sound always is earthy and warm.

Two of the biggest tunes feature Hugh Masekela…. how did you get him to collaborate? And what does he think of soulful house music?

Knowing his music and being a fan of Bro’ Hugh for more than 2 decades, it was an absolute honour and great experience to share the studio with him. Before my relocation to South Africa it felt impossible to approach him. Now that I live in his country, I just tried my luck. It was definitely not easy to get hold of him, as he’s steadily travelling around the globe to perform, but once we met and he heard the music, things became easy. He does not think in genres, but just differentiates between music he likes or doesn’t like. I am glad that he was into what he heard.

What about the other singers – how did you tempt them to join in?

Some of the singers are long-time collaborators, like Monique Bingham (pictured)or Kafele. Others were on my wish list for a while. Thanks to the digital age, it became easy to get in touch with artists no matter where they are located. I usually give them a brief introduction about me and the project, but mainly the music, which I present to them, has to do the talking. If someone does not feel the music, it would probably make no sense to try and convince him/her to work with me.

What song is your favourite on the album… and why?

Choosing a favourite would not really make sense, as an album as a whole should in ideal cases be one long favourite. Otherwise artists could stop doing full length albums and we will end up in a purely single driven music market. This would definitely lead to a less experimental approach. A full album allows much more freedom, which is healthy for progression. Every single song you hear on the album has its own story.

My main aim is to progress and grow as an artist. This happens whenever you try to deliver the best you are capable of and through the challenges you’ll have producing such an album. After it is done now, I definitely can say that I learned a lot during the process. My main hope is that “In My City” is an album which is liked by those who knew my productions before and gets more people into House Music.

What music do you currently listen to and does that impact on your own work?

Unfortunately my schedule does not leave much time to search for new music outside my own genre. Running the label, DJ gigs, my own productions plus helping up and coming talent with their careers fills my days. If I manage to find time nevertheless, I try to not limit my search. You can find good songs in pretty much all genres and of course they might influence your own work.

Where will you be in five years time?

I am absolutely happy where I am now and honestly haven’t planned that far ahead. Being able to do what you love and make a living out of it, is all I ever could ask for.

RALF GUM’S “IN MY CITY” IS RELEASED  ON GOGO MUSIC AND WILL BE AVILABLE FROM OCTOBER 6TH.  There’s a full review in our reviews archive