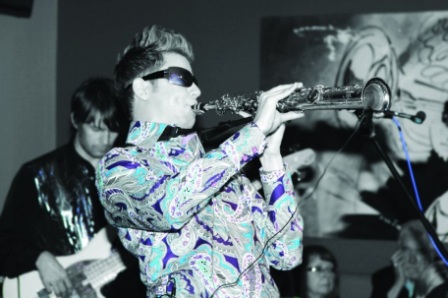 Sax man JOE LEADER is a rising star in the UK smooth jazz firmament. He’s launching his debut album, ‘Seductive Sax’, at London’s Leicester Square Theatre on Wednesday June 27th. Tracks from the long player are already making waves with UK jazz tastemakers, so SJF decided to find out a little more about Joe and his take on smooth, sax–led jazz. We began by  asking about his musical background and influences…..

I have spent all of my life playing music. I was born into a musical family; my mother, Lucille Orden Leader, was a professional concert pianist, With my first band I won the “Daily Telegraph Young Jazz Awards” aged sixteen – went on to study music at London’s Guild Hall school of Music and then at the University of Cape Town, South Africa. I have a first class honours degree in Music Technology from LCMM which has enabled me to produce my own debut album… My cousin – Felix King was a famous Jazz band leader (1940’s) so I’ve had influence from both family and friends – a few  years ago a pianist friend of mine introduced me to the music of Dave Koz and smooth jazz artistes – Grover Washington Jr and Maceo Parker. Other musical influences in my playing were definitely blues and soul legends – Ray Charles, James Brown and BB King. As my professional experience grew, I worked with Andrew Lloyd Webber, Pharrell Williams, Boyzone’s Stephen Gately and The Symphony Orchestra of India. I’ve performed at festivals at the South Bank, Royal Opera House, South Africa and France. I also set up and lead a 20-piece showband, called “The Joe Leader Collective.” which plays at London’s Café de Paris. The show includes performances from international vocalists, instrumentalists, break-dancers, tango dancers and even a family performance with myself on sax, my mum on Piano and my sister Serena, on violin. The band has also featured at many high profile charity and gala events across the country and corporate events.

Why have you chosen to go down the Smooth Jazz route?

In the late 80’s smooth jazz was a new and fresh approach to fusing exciting jazz with many different styles of music – rock , latin, pop – integrating jazz with modern music made jazz more accessible to the mass market. This musical tapestry gave the listener every popular style of music- mixing ideas and styles was a great way for me to appeal to all and experiment with different sound combinations within one genre. That’s what I’m aiming to do….

Now the album…. Seductive Sax – is it your first recording?

Yes …. The Seductive Sax gig last year (when the album was recorded) was held at The Pheasantry, Pizza Express Jazz Club to introduce me as a solo Smooth Jazz artist.

Why did you decide to record it live?

Initially the recording was set up to capture the debut event, however, after listening to it, it was apparent to us that it was something really special and deserved to be shared with a larger audience.

Tell us about some of the sidemen on it…

With one exception all the songs on the album are covers. Why did you choose those particular tunes/songs for the recording… do they represent your typical live shows?

The show consists of my favourite songs that I grew up with and loved to play .For my first gig as a solo artist, I wanted to play everything I loved in a genuine heartfelt way, to connect with my audience and take them with me on an emotional musical journey.

What do you think you bring that’s new to stuff like ‘Another Star’ and ‘Isn’t She Lovely’?

‘Isn’t She Lovely’ fuses a classical popular soul tune with an R&B groove to give it that ‘Seductive Sax’ edge. Soulful, exciting piano and sax solos with vocal harmony…

‘Another Star’ – I used the main motif and the groove, as a framework and platform to introduce each solo musician, coming together at the end of the gig in an incredible climax for the audience.

Who’s the vocalist on the album?

Ricci P Washington is the soloist on ‘Nature Boy’ and one of the BV’s on the album.

It has to be ‘Nature Boy’ – it encompasses so many different styles – classical, soul, blues even a touch of Arabian- all within one amazing musical journey.

Starting with a ‘live’ album has set the standard for me, for many adventurous things to come. I wanted to show fans and the industry the high standard and flavour of my musical ability, and the heart and soul that I put into every musical performance.

What are your immediate career plans?

Starting with the Album launch on June 27th at the Leicester Square Theatre – I plan to use the gig as a springboard to many other shows, new recordings, TV and radio appearances, and exciting collaborations and have an amazing team of support around me to facilitate this.

Where do you see yourself in five years?

Easy…As an internationally renowned saxophone player of the highest calibre, known for his stylistic versatility, passionate performances and electrifying live shows. Having several albums under my belt – each exploring different musical and emotional themes, but always with that soulful, heartfelt expression. Featuring on some movie soundtracks and being a sell out at Royal Albert Hall and Wembley Arena… not much that is it?

Finally … how would you defend Smooth Jazz to someone who labels its aural wallpaper or elevator music?

At its heart, smooth jazz is a fusion of jazz with other popular styles such as rock, R&B, pop, soul and reggae. Although some of today’s smooth jazz can be slightly formulaic – its originators and most popular artists (Dave Koz, Grover Washington JR, Al Jarreau, George Benson) have created some wonderful albums together with some inspirational ‘live’ sets. As the genre continues to evolve, the musical fusion will get more exciting – starting, of course, with ‘Seductive Sax!’

JOE LEADER’S ‘Seductive Sax’ is released on 27th June on Leading Note records. Find out more about the launch show @ www.leicestersquaretheatre.com/whats-on/music/2012-6-27 . And learn more about Joe and his music @ http://www.joeleader.com