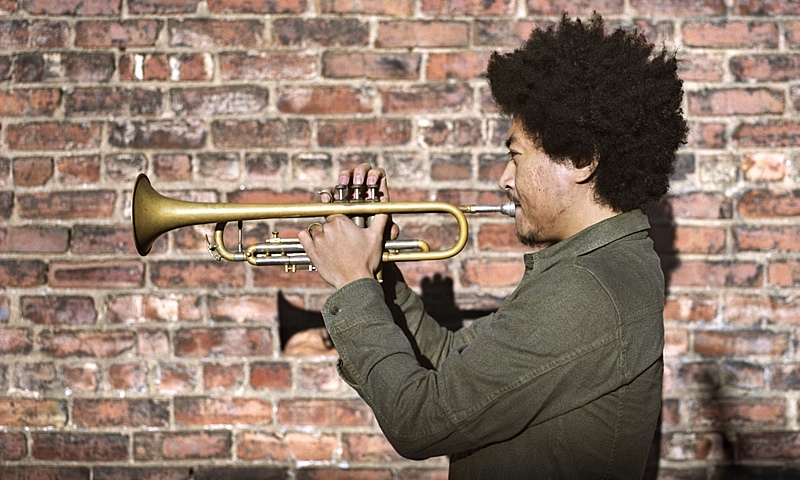 Earlier this year, New York-based Japanese trumpeter TAKUYA KURODA turned heads with ‘Rising Son,’ his debut long player – helmed by singer José James – for the iconic US jazz label, Blue Note. With its refreshing amalgam of funky soul-jazz grooves, percolating Afrobeat-infused rhythms and elegant post-bop horn lines, ‘Rising Son’ witnessed the Kobe City native stepping out from the shadow of singer José James, with whom he has been recording and touring for the last three years.

But Kuroda isn’t an overnight sensation. Like his mentor, James, he’s a graduate of New York’s renowned New School For Jazz & Contemporary Music and has been toiling in the Big Apple for a decade playing all kinds of gigs to pay the bills. After coming to the attention of James and appearing on the singer’s second album, ‘Blackmagic,’ in 2010, the trumpeter began making his own recordings which resulted in two self-produced, independently-released albums in 2012, ‘Six Aces’ and ‘Bitter & High.’

Kuroda was recently in the UK as sideman for label-mate James but also played some gigs of his own, one of which was at last weekend’s prestigious Love Supreme jazz festival near Brighton. The amiable and very talented horn man took time out to talk to SJF’s Charles Waring about his music, background and ambitions…

What’s the story behind your new album’ ‘Rising Sun’?

For almost three years, I was touring with José (James) all over the world. I also had my own band and sometimes I’d do a show in New York. One-time José came to see us and had a couple of suggestions for me. He’d say: “Tak, you should step forward more. I know you have a couple of other cats but people are there to see you.” One day we were at the airport in Tokyo about to go back to New York. It was just me and him. He said: “Tak, what would you think if I produced your album?” I was like: “wait, what?!” I couldn’t quite get it you know because I’ve been producing my albums myself and the idea had never come to me about asking somebody else to produce my album. I waited for two or three months but every time he saw me he said: “did you decide?” He was so enthusiastic and had so much passion for it that I thought, okay, it’s really great that somebody else really believes in my talent and music. José really wanted to produce my album so finally I said yes. That’s actually how we started this whole process. We did it in Brooklyn at the same studio (The Motherbrain) for José’s album (‘While You Were Sleeping’). I had four days and we asked José’s tour band – Kris Bowers (keys), Solomon Dorsey (bass), Nate Smith (drums) and Corey King on trombone. We had been playing together for so long that it was easy and we trusted each other. But it was a bit different because I was their leader now and had to give them direction but it was so great because everybody is so good: not only playing their instruments but also at producing music and coming up with ideas. So it came together so easy and nice.

You mention rising jazz keyboard star, Kris Bowers – what’s he like to play with?

José calls him a young genius and I really agree with him. This cat, right here, he’s young –  25 or something – he knows all of the language from the 1930s to this time right now and he can basically switch the style anywhere to anywhere and can cross over the genres too, from indie rock and pop to contemporary jazz, so he can play anything.

How would you describe your own music?

That’s really difficult. I came from Count Basie big-band music. That’s where I started when I was twelve and then what I liked about him was that it was all about melody and the rhythm and a lot of blues and soul in there so I’m sure that’s my biggest root of inspiration. But having a group I’ve really developed my writing. Stevie Wonder’s also a big influence; how he comes up with a melody. But if you really listen to him there are a lot of harmonies underneath the pretty, catchy melodies. When it comes to the rhythm, one of my biggest inspirations is Fela Kuti. I was with an Afro-beat group for six years and I love the way that he used rhythms.

There are a couple of Roy Ayers tunes (‘Everybody Loves The Sunshine’ and ‘Green And Gold’) on the album as well.

I’m a big fan. I love him as a jazz musician who can cross over; hip-hop, R&B, jazz, and soul. I don’t think anyone compares to Roy Ayers. I think he’s a guru. I covered his songs because what I want to do is to reach out to more people, not only just the traditional jazz people but also DJs and nightclub people too.

I love everybody. I started with Clifford Brown and of course Dizzy (Gillespie), Blue Mitchell and Lee Morgan. I can name many.

You’re signed to Blue Note. What does is it feel like being signed to an iconic jazz label with so much history attached to it?

It’s a dream come true but it was too big to dream about when I first went to the New York. Like everybody else I had a time when I didn’t have any gigs and you start thinking I should have a part-time job. But I got picked up by José James three years ago and then I started playing huge, huge festivals all over the world. José was the one pushing me to Blue Note. At first I had mixed emotions: maybe I’m not good enough and I don’t know what people are going to say. It seemed like a lot of pressure. But now I’m like: OK, they signed me and José thinks I should do this. I told myself it’s not something that I worry about: I should just focus on the music. Now I’m really enjoying every single show and want to share the music with people all over the world.

How did you start out as a musician?

I was in a school band playing Count Basie and Glenn Miller and Duke Ellington. In my class everyone else was listening to pop music and I was the only guy listening to jazz music. Then I started playing more standard jazz with the elders there in Kobe City. There’s a big scene there. I was fifteen/sixteen and the elders, the local jazz musicians, said just come and bring your trumpet. I didn’t know any songs and just had to play by ear but they taught me the language of jazz and gave me the basic information of it.