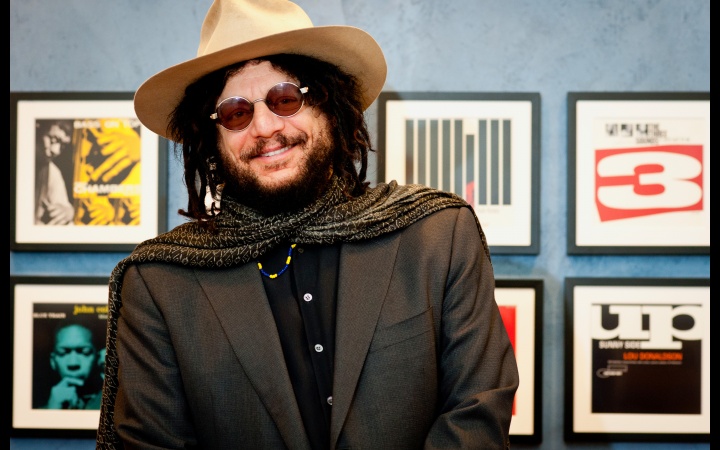 “When I started out being a president of a record company, I was totally unprepared for it,” laughs DON WAS, reflecting on the first few days of his reign as boss of Blue Note, the iconic jazz label that German-Jewish émigrés Alfred Lion, Max Margulis and Emmanuel Eisenberg founded in New York City in 1939. Was, now 62, is sitting in Universal’s UK headquarters decked out in Bohemian-like attire (including flip-flops and a wide-brimmed hat nestled on his dreadlocks) and doesn’t resemble what most people envisage a record company boss to look like. He took over the reins of the company when it became part of the Universal group in 2012 and confesses, with a wry chuckle, that initially, he found his transformation from bandleader/hit-maker and Grammy-winning record producer to label president a challenging one. “I had no idea what the fuck I was doing,” he explains with an amiable and disarming candour.

Of course, there were some doubters and naysayers who questioned Was’s credentials and even his qualifications to be at the helm of a prescient and historically-significant record label that had released groundbreaking jazz records by Thelonious Monk, Clifford Brown, Art Blakey & The Jazz Messengers, John Coltrane, Horace Silver, Hank Mobley and myriad others in three fertile decades that were represented by the ’40s, ’50s and ’60s. After all, Was’s CV didn’t appear to have many jazz associations. Born in Detroit, Was rose to fame as a bass player and songwriter who tasted international chart success in the ’80s and ’90s with the pop-soul-funk aggregation, Was Not Was, before moving into the realm of record production and helming albums for rock giants such as The Rolling Stones, Bob Dylan, Ringo Starr and Bonnie Raitt (soul fans might recall Was’s work with Solomon Burke, Al Green, and more recently, Aaron Neville).

But what many people didn’t know was that Don Was fell in love with jazz as an adolescent and has been a serious jazz head ever since. In a rare interview, the award-winning producer-turned-record company chief reflects on Blue Note’s history, his current role, the label’s future and other fascinating aspects of his successful career…

What circumstances led you to become the head of Blue Note?

I was in New York producing a record, man, and it had nothing to do with jazz. It was a John Maher record. I had a night off and went to go see Gregory Porter. I bought his first album which was on a little label called Motemo, a great jazz label out of Harlem, and I just thought that he was an incredible artist. I’d never heard or seen him live but that night I went to see him it was the greatest thing I had seen in ten years. So I sat there for three sets, ate ribs and drank coffee. It was a great night and the next morning I was sat with a friend, an old buddy of mine named Dan McCarroll, who was the president of Capitol Records. We were just talking about other shit but as we got up to leave the restaurant I said: “by the way, is Blue Note Records still part of Capitol, because if it is you should sign this guy Gregory Porter, I saw him last night.” And unbeknownst to me, there were big discussions going on EMI about closing down Blue Note as a new music entity altogether and just making it a website that sold catalogue and T-shirts. Dan was not a proponent of that approach so I just happened to come along with a constructive idea on the right day and he offered me the gig. (Laughs)

How did that feel?

Well, to be honest with you I always viewed record companies with tremendous suspicion and they were kind of the enemy and I kept them at arm’s length. I never wanted to work period. I never wanted a fucking job, you know. That was my goal and I was almost there, I was 59 and I was almost home free without having to get a real job but it was irresistible, the idea of being part of that legacy and being the caretaker the legacy. I was charged with identifying the underlying aesthetic and finding that in the music.

How healthy do you feel the label is right now?

Right now the label is particularly robust. We have some incredible guys, who each has their own way of pushing jazz forward. I just wrote out the active roster and right now, for 2015, our active roster is Wayne Shorter, Bobby Hutcherson – we just signed Charles Lloyd as well – Ambrose Akinmusire, Ravi Coltrane, Gregory Porter, Terence Blanchard, Joe Lovano, Robert Glasper, Jason Moran, Derek Hodge, Chris Dave, José James, Lionel Loueke, the Brian Blade Fellowship, Tukoya Kuroda, Otis Brown III. We’ve also got Marcus Miller through the French company (Dreyfus) and we’ve released Jamie Cullum’s new album in the US. We’ve also been doing other Impulse! releases coming out of France: Charlie Hayden and Jim Hall, Dave Holland and Kenny Barron, Steve Burnside, and we’ve just about started signing Marcus Strickland and Kendrick Scott. Dr Lonnie Smith is doing a new album for his and Kenny Burrell is going to do ‘Midnight Blue Part Two.’ So it’s really vibrant, the company. I don’t know that there’s been such a strong active roster at any time in the label’s history.

So what’s your agenda?

Yeah, that’s one thing. We’ve done two records so far through them, the Blue Note/Artist Share, with Fabian Almazan, who’s a young piano player. He got to make his first record (‘Rhizome’) that way and then we kicked in and helped him with some marketing on it. And his next one will be on Blue Note. There’s also John Cowherd, who plays with the Brian Blade Fellowship. He’s done a record with them (‘Mercy’). So yeah, we’re trying all kinds of different things and so far it’s working. We’re able to make these records. The other thing is we’ve got to figure out how to bring the cost of making records down.

Do you see the CD as a dying format/market now? Vinyl sales in the UK are set to hit 1 million this year…

Vinyl sales are great, it’s really amazing. We’ve pressed maybe 1500 of each of classic Blue Note titles. We’re doing a 100 vinyl reissues, 100 albums, between now and November of 2015. And then we’ll start the second hundred (laughs). They’re all selling out. It’s not really shocking. It’s a nice surprise but it doesn’t shock me because it’s such a great way to listen to music. I love playing vinyl. It sounds great. There’s something about holding a 12-inch album and in seeing the thing physically spin. I find myself sitting around like my kids watching it. It’s like having a campfire and people pay attention. And there’s something about a 15/17 minute side that’s properly programmed. Everybody’s got time to listen to that. It’s tough to listen to seventy-two minutes of music.

As soon I came to Blue Note there was a call to remaster everything in hi-res. It had never been done. There had been good mastering done but never in the hi-res formats and you can’t just give them at 48 kHz and say bump it up to 192. You’ve got to go back and do it again. So we put the tapes up and they sound amazing.

Do they sound radically different from the original records?

Well, here’s the thing. We got into a very interesting philosophical dialogue about how to treat this because it is different. When I pulled the un-mastered master tapes they didn’t quite feel like the versions I knew. This whole idea of improving something is highly subjective and it’s really not my place to do that. It’s my place to represent the original intentions of the artist and Alfred Lion and then (engineer) Rudy van Gelder. I kind of figured that the first edition vinyl represented the definitive mixes so we’ve gotten the first edition vinyl of every one of these (of all the albums that they intend to reissue on vinyl) and listened to them. The thing about vinyl, it brings the back of the mix a little closer and it makes the room smaller – the imaginary room, right? – but it does some other, really good things. So the idea was to extract the really good things and to get the feeling of it right. The compression, for example, adds power to the drums. Art Blakey sounds like he’s been pumping iron and is even stronger and so the idea is to match that feeling but to take advantage of the transparency of 192 (kHz). We went around in circles for months trying to land on an MO for how to do this and then we finally got it. So when we did the vinyl initiative, we’d take whatever mastering we had done for 192 kHz and start reissuing vinyl off of that.