BEHIND THE NORTH SEA JAZZ FESTIVAL – its director, Jan Willem Luyken, talks to SJF about this year’s exciting line-up… 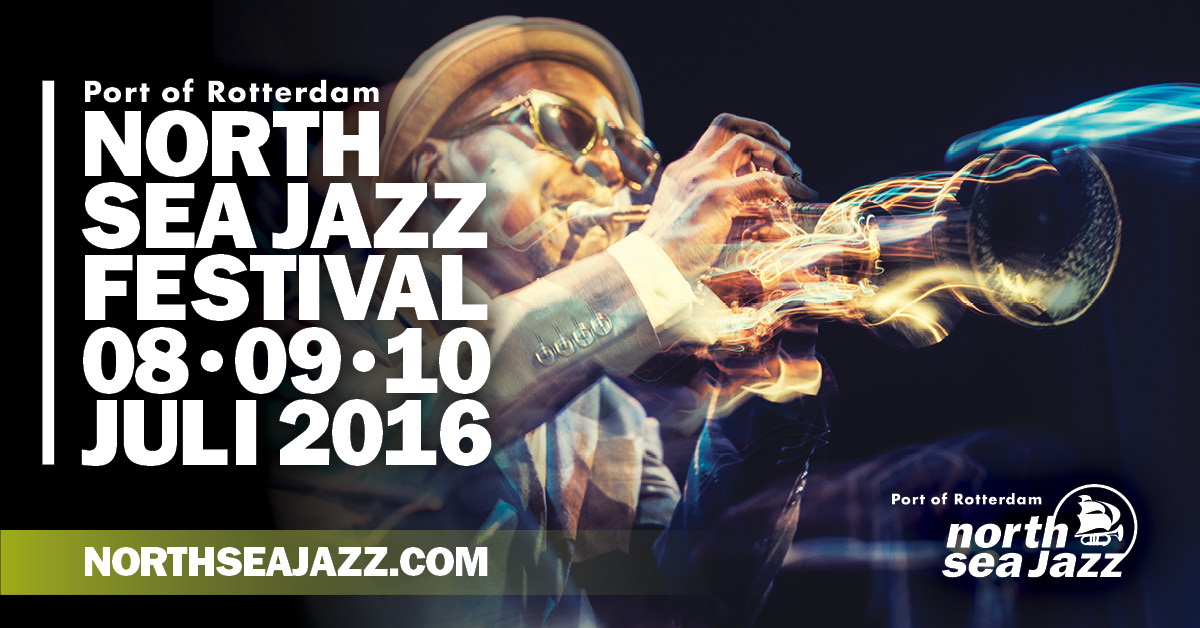 Held every second weekend in July, Holland’s North Sea Jazz Festival is without doubt a veritable talent magnet that attracts the biggest, brightest and best names in popular music – not only in the realm of jazz, its core genre, but also from the adjoining worlds of soul, funk, hip-hop and even pop.

Originally established in The Hague in 1976, in 2006 it relocated to Rotterdam, where it’s been ever since, occupying the Ahoy convention centre, an enormous arena in which 15 stages will be contracted to present over a thousand different acts during an intense and hectic three-day period. The festival director, Jan Willem Luyken, admits that in terms of logistics, the festival is, by its nature, problematic. “It is a challenge, it’s a big puzzle, ” he confesses with a wry chuckle. “It’s a broad musical spectrum we try to present and the basis, of course, is jazz – we have a lot of jazz – but we also do all of the jazz related stuff like soul, funk, hip-hop, and even pop music, especially the big acts, who go to all of the festivals across Europe. So you have to be smart, you have to save money and be good with your timing. Every year it’s a difficult puzzle but on the other hand it’s a very nice puzzle, of course, to make. So we’re not complaining.”

This year’s festival is scheduled for the weekend of July 8th, 9th and 10th and although the final line-up has yet to be announced, Willem reveals to SJF’s Charles Waring those acts already confirmed. It’s a mighty impressive bill.  “For Friday 8th July, we have The Roots, Diana Krall, Buddy Guy, Snarky Puppy with the Metropole Orchestra – they won an Grammy – and then we have a very special theme evening presented by the Brainfeeder label and that features Flying Lotus, Kamasi Washington  – who also will perform with the Metropole Orchestra – Kneedelus, Thundercat and the Jamezoo Quintet. And let’s not forget Christian Scott and Dr Lonnie Smith.” Saturday July 9th offers an equally impressive line-up: “We have Earth, Wind & Fire, Level 42, Miguel, and it’s very good to have Pat Metheny back again,” says Luyken. “Also (legendary jazz bassist) Ron Carter, and the hip-hop of today will be there, Anderson .Paak and the Free Nationals. (Grammy winning chanteuse) Cecile McLorin Salvant will be there and Stephen Wilson, the guy from Porcupine Tree, with his solo project. (Japanese pianist) Hiromi is appearing also and the Branford Marsalis Quartet with Kurt Elling. And we have the Steps Ahead reunion band…“

Add to that already impressive list Mick Hucknall’s Simply Red, blues-rock guitarist Joe Bonamassa, R&B poetess Jill Scott, and jazz cat in a cap, man of the moment, Gregory Porter – who all play on Sunday 10th – and you have a mouth-watering array of talent in one venue…

(pictured left, festival director, Jan Willem Luyken). From your point of view, who are you most looking forward to seeing and hearing this year?

Well, I’m looking forward to the Brainfeeder project on Friday with Flying Lotus. He’s not touring this summer but he’s specially coming out for us to do this special Brainfeeder evening. I’m also looking forward to (saxophonist) Branford Marsalis and (singer) Kurt Elling. I’ve heard some of the music and it’s great. I’m looking forward to (R&B singer) Anthony Hamilton, we had first had him three or four years ago, and the jazz supergroup, Scofield-Mehldau-Giuliana. I don’t want to brag but there’s so much good music going on.

What’s the unique feature of the North Sea Jazz Festival? What distinguishes you from other festivals?

Well, I think the concept is unique because it’s an indoor jazz festival. We use a very big convention centre that combines very big halls with very small venues. We try to create a jazz planet inside with thirteen stages, ranging from a 15,000 standing arena to a 200-seating jazz club. So we are able to present the whole spectrum from pop music headliners like Earth, Wind & Fire, The Roots and Jill Scott to the very small artistic improv music, and everything in between, so we can do it all. That’s a unique feature of the festival to do it all at the same time and people can walk around and create their own festivals.

What’s the philosophy behind the festival? Why do you do what you do?

The founder, Mr Paul Acket, who founded the festival in 1976 in The Hague, was a jazz fan and he thought that jazz wasn’t getting enough attention and thought to himself, “what I’ll do, I’ll create a jazz festival but alongside the jazz line-up I’ll create a more popular lineup to attract more people and the audience can then get acquainted with jazz music.” That was his philosophy, and that philosophy is still there and that’s what the concept is all about; to create a commercial line-up and an artistic line-up and we glue that together. And that’s what our audiences like, I think. You can go with your whole family and with your children. It’s really from ages 8 to 80. It’s not only for older people or younger people: it’s a festival for everybody and that’s what we’re really trying to do. And we always stay true to our roots, which is jazz music.

It sounds marvellous. How long have you been associated with a festival?

I’ve been the director now for eleven years. This is going to be my eleventh creation in July and before that I was head of marketing in the Mojo concert hall, which is another company of the North Sea Jazz Festival, so I was involved there as well. Before that I had been going to the festival since I was fourteen with my father. I was basically raised with this music.

Which performances over the years are the most memorable that you’ve seen?

Well, when I was younger, I remember so much. It was in the ’80s so I was able to see all these big giants, like Miles Davis, Sarah Vaughan, Ella Fitzgerald and Gerry Mulligan. All giants and I was lucky enough to see them play. All live. The special one that I always remember is (pianist) Michel Petrucciani, it was one of the most impressive shows that I’ve ever seen in my life and I was in the front row. As a director, of course, I don’t have time to watch many shows, but one of the most impressive ones was in 2011 when we had Prince playing three late-night concerts at each day of the festival. He played Friday, Saturday, and Sunday night concerts. The first one was a little bit hard and difficult and wasn’t the best show that he ever gave but he tried to make up for it the day after and this one was an amazing show. I’ll never forget it, it was so impressive. Also, we had Amy Winehouse in 2004. She was not a pop star yet she was still a very, very talented girl and she impressed everybody very much. But no one knew about her then. We rebooked her in 2007 after the ‘Back To Black’ album but then she cancelled just five minutes before the show so… it was a big disappointment for us. But every year is a rollercoaster and every year something interesting happens.

How complicated is a festival like yours to put on? What challenges do you face?

The challenges are to get the lineup together but also in a production way: how do you manage one building with 25,000 people in it every day? And they can move freely, they can move between concerts and leave whenever they want. So we have to be very well-organised in the routing of the crowds. It’s a challenge every year but we’ve had a lot of experience in the last forty years, and I think we are doing a good job but it’s always a challenge, because if everybody wants to go and see Stevie Wonder, for example, …say we have 25,000 visitors and if 20,000 want to go and see Stevie Wonder, then that’s a problem. So we have to put up another big artist up against Stevie Wonder to divide the audience. We have to be very strategic about it, that’s one of the biggest challenges.

Is there somebody that you have been wanting to get for years and haven’t been able to yet?

Yeah, there’s one big wish, but I don’t know if it will ever happen – Aretha Franklin. Five years ago we were talking about who were the biggest acts that we really wanted to have. We mentioned Stevie Wonder, Prince, and Quincy Jones and we also mentioned Aretha Franklin, and coincidently enough, the last five years, they have all been there – Stevie, Prince and Quincy – but we couldn’t get Aretha Franklin because she doesn’t fly. So if we could get her over, that would be one of my biggest dreams.

Is there anyone else on your wish list for the festival?

Yes, I would love to have Kendrick Lamar. He was here in 2013 but then he was not as big as now, but he made this album (‘To Pimp A Butterfly’) which is full of jazz influences, and we love those crossovers between jazz music and pop or hip-hop and soul so it would be better to present him once more with a full band, but I don’t think it’s going to happen because all of the big rock festivals in all the world want him and he’s very expensive.

What’s the most unusual request that has been written into an artist’s contract?

I get that question a lot. The only thing that comes to mind is Snoop Dogg, who we had at the festival two times. He always requests an Xbox in his dressing room. That’s one I remember, but for the rest, no. I think that doesn’t happen so much now – today live music has become so professionalised so I don’t think we get strange requests any more. Of course, artists often ask for some level of luxury and things like that – when you tour as a band and are in-and-out of planes and buses and hotels, and every night you have to perform and bring this artistic performance night after night, it’s very, very tiring, so you want to be treated well.

What’s the festival’s impact been on Rotterdam since you moved there?

It’s doing very well because it attracts a lot of international public to the city. Rotterdam is really the second city of Holland. Amsterdam is the capital, which is always very popular, but Rotterdam was totally destroyed in World War II so it’s a new city and there’s a lot of new architecture and dynamic new things happening so is a totally different city than Amsterdam – it’s dynamic and its young and I think it’s good for a jazz festival to be in an environment like that. And there’s a very lively music scene in Rotterdam as well. So it’s a very good match and all the hotels are sold out six months before the festival, so I think also from an economic perspective, it’s a good spin-off for them.