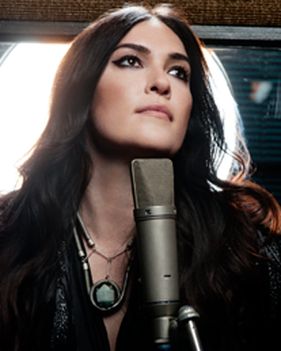 Though her new Mercury album, ‘Dark Black,’ may appear to be a haunting study in melancholic introspection, Kristina Train says she’s really euphoric right now, a fact that’s underlined by the many melodious peals of laughter that ring out from her during the course of an illuminating interview with SJF. “I really love my life here,” says the 30-year-old Big Apple-born singer/songwriter, who bravely upped sticks and moved to London from her native USA in 2011. “I took a big chance” she says, but a year or so down the line her new life in England seems to be paying dividends, both in terms of her career and personal life. “I feel so at home here and I’m very happy,” she enthuses, and confesses that she’s taken to English life and our national idiosyncrasies like a duck to water: “I’ve really embraced British-ness and I want to be a Londoner for life.”

But ‘Dark Back’ tells a different story and shows a different, more reflective, Kristina Train. But while its songs, themes and moods are mostly dark and sombre it’s never funereal or depressing. For Train making the album proved a valuable cathartic journey that eased her transition into life in England. “It was really important to me because it allowed me to work through a lot of stuff,” she explains. “It wasn’t that I necessarily said ‘okay I’ve got to write downbeat songs,’ it was just that I really had to get some stuff out of my system and needed to flush it out. It’s heavy and there’s a darkness to it but I also really wanted to focus on the beauty and the light in it. The album was really about me holding on to the hope that I would find my way through it.”

Co-produced by Kristina with Martin Craft and Ed Harcourt, ‘Dark Black’ is, in fact, the singer’s second album and follows in the wake of her debut, ‘Spilt Milk,’ which was issued on Blue Note in 2009. The album garnered positive reviews but sadly problems at her label’s parent company, EMI, during the same timeframe meant that Train’s debut fell largely on deaf ears due to a lack of support and virtually non-existent promotion. Now, though, Kristina Train feels she’s right back on track – she’s on a new label, has a critically-acclaimed new album just out and feels that her time has finally arrived. She tells all to SJF’s Charles Waring…

What’s the background story behind the new album?

The background story is that I left the States and moved to London last summer. I left my label – I was on Blue Note Records – and left everything behind in the States. I took a big chance and holed up for I guess almost a year and wrote this album and then resurfaced to see if anyone was interested in putting it out. Then I signed to Mercury this last March. So I guess the album really for me was a time to reflect on the life that I’d left behind and the life that wasn’t happening for me any more. I went through a lot of changes and so I guess that’s what this album is about: my journey through that.

The title song is particularly striking.  What was the inspiration behind that?

‘Dark Black’ is a weird term because it doesn’t really make sense but I guess what I wanted to try to explain was this emotion that I was feeling. In life you have certain emotions and you think that that’s it and you know how to access them and then all of a sudden something happens and you find out that your threshold has changed. All of a sudden the level of the emotion that you’re feeling is just blown wide open. So the song is about me trying to find a way to express a deeper level of pain.

Can you describe the process of how the album took shape?

Martin Craft and I wrote and produced the core of this album together. We did ‘Dark Black’ in his living room one afternoon on his computer using MIDI. It’s funny because if you’d have asked me five years ago if I would ever have an album that was mostly MIDI-ed I’d have said ‘you’ve got to be kidding me.’ But after I went on tour with Herbie Hancock I was inspired to embrace technology. I really wanted this album to be modern organic: to use technology in an organic way and to be able to still create the sound that I love.

What about your collaborator Martin Croft? What can you tell me about him?

I’d always been a fan of Martin’s; he’s a solo artist who goes under the name M. Craft and I always really loved his writing. I met him about two years ago and we became friends because I always find it very difficult to jump in a room with someone I don’t know and try to write songs. I know so many people are good at that and I really wish that I was, but I’m not, so Martin and I became friends. We have a really strong relationship – he knows me and I know him and it’s really easy to work together. We don’t have any inhibitions so we’re able to be very free with what we’re doing. Basically it was just a matter of complete trust and a case of me opening up to him because it’s a very personal album. So to be able to walk through that with somebody is great. It has to be the right person for me and Martin was that.

Yes, Ed’s also a great friend of mine. I met Ed in 2007 and we became fast friends. I just love collaborating with him. I’m also a huge fan of his and to top it off, I got to work with my other dream man, Simon Aldred from (Bolton indie band), Cherry Ghost, who I think is just amazing as well an incredible writer. I guess I loved the days when you had the Dan Penn and Spooner Oldham, Bacharach-and-David, and Goffin-King…those kinds of writing partnerships. I feel on ‘Dark Black’ we locked into something that was personal and magical so I’m just happy I’m able to do it with these guys ’cause it’s really pure, honest and true.

How does this new album compare with your debut, ‘Spilt Milk’? Was it easier this time around because you’re more experienced in the studio?

It was easier in that sense but harder in the sense that I knew exactly what I was facing. The beauty of my first album when I go back and listen to it is that I hear my naïveté, my sweetness and my innocence and I had no idea what I was really doing. I thought I did, I thought I knew it, but I really had no idea what I was getting myself into. This time I knew exactly what I was getting into and I guess that did make it easier but it also made it more difficult because I knew what it would take for me to really get it to a point where I would be satisfied with it.