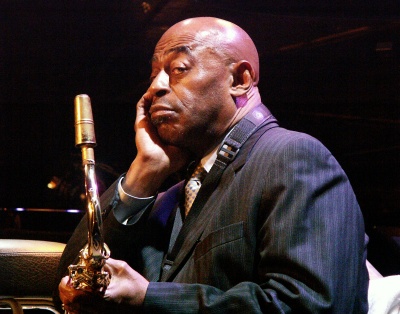 When George Jackson, a black activist who was imprisoned in California’s notorious San Quentin prison, was shot dead in 1971 while trying to escape, his demise triggered a protest on the US East Coast in the overcrowded Attica Correctional Facility in the state of New York. The event of Jackson’s death combined with the inhumane living conditions endured by two thousand incarcerated men sparked a rebellion by a thousand of the inmates in the prison, who took control of the facility. The American authorities called it a riot and eventually wrested control back but at the cost of thirty-nine lives. What happened at Attica inspired saxophonist ARCHIE SHEPP – then in the vanguard of the jazz idiom’s avant-garde movement – to record a concept album for the iconic Impulse! label called ‘Attica Blues.’ Blending jazz and blues with soul and funk elements, it was a far cry stylistically from the cutting-edge freeform avant-garde work that he’d made his name with in the early and mid-1960s.

Forty-two years later, Shepp – now in his seventy-sixth year – is revisiting his classic protest album with a brand new CD, ‘I Hear The Sound,’ which features his Attica Blues Orchestra. It was recorded live in France earlier this year – at the Festival Les Nuits De Fourviere – and recreates in large ensemble format the entire ‘Attica Blues’ album as well as featuring other key tracks from his career. The saxophonist brought the Attica Blues Orchestra over to London last weekend for a performance at the Barbican as part of the London Jazz Festival. He talked to SJF’s Charles Waring prior to the concert from his base in Paris and their conversation covered his work with Lee Morgan, Cecil Taylor and John Coltrane as well as the new album…

What’s the background story to the new album?

Well, I first recorded ‘Attica Blues’ just after the uprising in Attica, New York. It was in 1971 and it was my percussionist who suggested that we do a tribute to the people, the prisoners, at Attica. As you know, it was quite a tragedy.

How did it feel revisiting the music that you first created over 40 years ago?

Oh, I think it has a certain classical aspect because I used several composers that came from different epochs, like (Charles) Greenlee and (Cal) Massey – they were with Billy Eckstine – so the music recalled certain conventions that belonged to another time. Everybody listens to Madonna and Michael Jackson now, so some of the idioms that we employ in the orchestra are not really well-known to young people except the blues.

Do you think that ‘Attica Blues’ still has relevance today?

Oh yes, absolutely. Today things are much more commercial and the people that are producing the music are really producing certain kinds of music that they prefer, like a rock ‘n’ roll, or hip-hop, or rap. I have nothing against that but the earlier music, what I would call the classical music of Coltrane, Monk, Charlie Parker, Art Tatum, Duke Ellington, and all those people are rapidly being put aside.

You mentioned Duke Ellington and on the new album you got a lovely rendition of the Duke’s classic piece, ‘Come Sunday.’ What was the inspiration behind you including it?

I did two recordings of it before: one in ’71 (on ‘The Cry Of My People’) and one in ’77 (on ‘Goin’ Home’), when I had Ray Copeland with me, a great trumpet player who had worked with Monk and was a great arranger. He happened to have a copy of that arrangement, ‘Come Sunday,’ and I found it all together apropos to the circumstances because it does seem to have a certain spiritual quality and speaks for life over injustice.

How influential was Duke Ellington on your own musical development?

My dad, who was a banjo player, used to listen to Duke all the time. His favourite songs were ‘Solitude’ and ‘Mood Indigo’ and that’s how I got to hear people like (saxophonists) Ben Webster and Johnny Hodges. He played a lot of that music. He had quite a collection. Also, he was a big fan of Count Basie. He liked Benny Goodman, too. That was because of (guitarist) Charlie Christian. My father played some guitar too.

And was it from your father that your interest in music sprang?

Oh, absolutely. When I was seven I started on the banjo – it was my first instrument really. Then when I moved north (from Florida) to Philadelphia I took formal piano lessons and the clarinet. Not the saxophone so much but the clarinet.

Who influenced you when you were growing up?

Well, by chance I happened to hear (trumpeter) Lee Morgan at a jam session. He was a little younger than I am but he was a genius. He had already been playing for two or three years and was playing all over Philadelphia. This was at a jam session and when the session was over I asked him if he would help me to learn to play chord changes on the saxophone. At that time I was having piano lessons and he didn’t have a piano player so that’s really how I learned to comp piano, backing him up on Saturday afternoons when he didn’t have anybody to accompany him. On Saturdays, I would go to Lee Morgan’s house. He practised all the time. He was like Coltrane in a way. He was only 16 or 17 and when I would get there he’d practice this classical music from albums and his trumpet Bible and then he would practice some jazz things, Bud Powell and Charlie Parker. In fact, my first professional gig on piano was with Lee Morgan in Rhode Island, some years ago, when he couldn’t find a piano player (laughs). It was probably around ’57 or ’58 because I was still in university.

You played alongside avant-garde pianist/composer Cecil Taylor at the beginning of the 60s – how did playing with him affect your musical development?

I think Cecil was very important. He was a mentor; not only in terms of music but the philosophy of music as well. He is a very interesting man to talk to – perhaps an intellectual on the level of (writer/playwright) James Baldwin in a way. Musically, I really learned a lot working with him. I sort of released myself from traditional 2-5-1 chord changes, figured bass and standards and ballads, because playing his music was really very challenging.

Did you feel a natural affinity with avant-garde music? What drew you to it?

Well, Cecil, in fact. He was a piano player. I really didn’t like that music at all it’s just that when he hired me I figured it was my chance – in fact, it was for a recording date and I thought, well, if he has enough confidence in me… He had never heard me: I was recommended to him by his bass player, Buell Neidlinger. But he picked me out never having heard me play and put me on my first recording date. It was absolutely the most important thing that could have happened for me. We made two records together: ‘The World Of Cecil Taylor’ and ‘Into The Hot.’

No, not really, in fact even now I’m a blues-oriented player. But playing that kind of music opened a lot of doors for me. It sort of freed me up from traditional chord changes and clichés and so on.

Many people first heard of you when you were signed to Impulse! Records in the ’60s and ’70s. What circumstances lead you to sign for them as an artist?

It was through the good graces of Mr Coltrane. John was very helpful to me in that regard. I had tried to contact his producer, Bob Thiele, many times and he was always either out to lunch or gone for the day. I sat in with John at a club in New York and asked him if he would speak to his producer for me. At first, he questioned whether he should do it or not because everybody asked him to do things for them but I think that he sensed my sincerity and he spoke to Bob for me and the next thing I called (the label) and the secretary said: “he’s out to lunch – but he’ll be back.” (laughs). So that’s how I started with Impulse! and then I did the ‘Four For Trane’ album.

What did John Coltrane think of your versions of his tunes on that album?

Well, he seemed to be satisfied and that was very important to me because he was always a real hero to me, John, and I still listen to his music. He’s still a mentor to me, in fact. I remember that Bob Thiele wasn’t very excited about doing it. But after we played the first two or three songs he became very excited. He said: “hey, this stuff is great,” because I think he thought that the avant-garde would be more like Cecil (Taylor) or Albert (Ayler) but I was prepared to play melodies and so on. So he got on the phone – it was about 11 o’clock at night – and he called John and said: “John, this stuff is great. You’ve got to come out and hear it.” John lived way out on Long Island and we were in New Jersey but he drove and got there about one o’clock. He had no socks on – you’ll see that on the cover photograph. He heard the tape and said, “yeah, I like it.” Thiele said: “I like everything but the last tune,” which was one that I wrote. The others were written by John, four of them, and I arranged them and Roswell Rudd arranged them too. So I played the song that I had written, called ‘Rufus (He Swung His Face At Last To The Wind And His Neck Snapped.’ That was the full title. It’s the only real avant-garde piece on the album; the one that doesn’t use chord changes and so on. Bob Thiele said he didn’t like that song at all (starts to laugh). In fact, he told John: “I like everything but that tune that he wrote.” He said: “Do you think we should take it out?” And Coltrane said: “No, Bob, I like it. I think we should leave it in.” I have a feeling that in his way, John was satisfied with what I did.

Oh, he was a very gracious man and a gentle man. He was a magnificent virtuoso of the saxophone – and a bluesman. He could play all styles, all idioms, and still be convincing and inspiring.

You went on to work with him on the sessions for his ‘A Love Supreme’ and ‘Ascension’ albums, didn’t you?

Yes, he invited me to play on both those.

What are your memories of those sessions?

Well, I was a young guy and was so overwhelmed to be in the presence of a great maestro that my memories are not so clear of exactly what I did or what I played. I remember that when we did ‘Ascension,’ there were some chord changes and Trane was the only one that had the changes and he used them as an interlude between each solo. I frequently asked myself: why didn’t I ask him what were the chord changes he was playing between solos. I was so kind of overwhelmed by just being there.