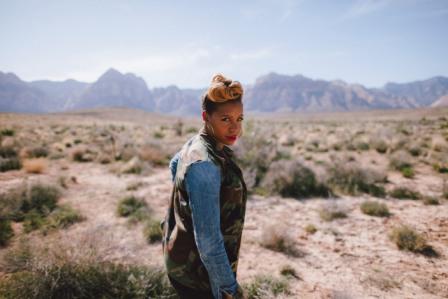 TV’s X Factor has its critics but despite the brickbats, it has created some “names”. One is London-based soulstress ANNASTASIA BAKER. Annastasia was a finalist in the 2010 series and since then has gone on to become a star on the London gospel circuit. Indeed she was nominated for a MOBO in the Gospel section of the awards and now she’s set to turn more her heads when her first solo album, ‘You Turn’ wins release in June. What better time then to find out a little bit more about Ms Baker…..? Let’s start with some personal info……

I was born in Jamaica and raised in the UK, residing in South London. I left Jamaica when I was 8 months old and I am the eldest of four children; one younger brother and the rest of us are girls. We grew up as a fun family, lots of jokers and a lot of our day to day life was full of laughter as well as music. I didn’t realise that I had a musical gift though until I was in college and that’s when I began to enjoy it so much more and pursue it seriously.

And what about your musical upbringing… growing up who were your influences… your heroes?

Growing up I loved Tina Turner and Whitney Houston. Kirk Franklin has also been a great inspiration. I would look at them and the effect they had, how they rocked the stage. I used to watch DVDs of my parents and I would be mesmerised by their stage presence.

Now tell us about those TV shows…. X Factor and the Gospel show, Time2Shine. How did you fare and what was the whole experience like?

Both shows were brilliant platforms for me, for very different but also similar reasons. I auditioned for X Factor several times and made it as far as the televised edits twice, so the learning curves, the networking, the experience and the exposure was all so great for me. I didn’t take no for an answer, and although I have always been ambitions, it built me up to be a more determined character to learn and absorb more. When I entered Time2Shine, I had a different mind frame and I knew I didn’t want to leave the show the same way I came in. My energy and approach was different, there was a shift and ever since winning the show, the opportunities and journey is going from strength to strength. Both shows gave me great exposure and made me who I am today. Now, through Time2Shine, people can see and reach Annastasia Baker, the whole experience has lead to this.

I’m sure you’re always asked this… how you counter critics of those shows who say they’re a quick way to stardom…. that the artists on them haven’t worked for their success….

Everyone in life has a different journey and these shows are a new platform that you have to use for the positive advantages. They provide the exposure, the finance, the contacts to aid your journey. I don’t think there is anything wrong with it, not everyone is born with the resources and finances to make it happen on their own, for anything you want to achieve, it takes team work so these platforms are great start creating that. Often, it’s harder because you are judged by the public instantly for some many things when you actually have worked very hard well before, during and after the show but there is only show much you can see on TV.

OK, take us from those shows to where you are now….

I used to be a comedian at school in the sense that I wasn’t very serious with music as I didn’t know I had the raw talent. When I found my strengths at college, friends and family encouraged me to enter shows like X Factor, so when I wanted to take it further, these shows built me up, gave me exposure and now it’s made me who I am today. I have some people around me and I am grateful for the team who believe in me. I am growing everyday and the growth is so solid. I’m on the right track, coming into my own and embracing it all, doing my best with every step.

You’ve just completed a US Tour…. tell us about that…

It was amazing. I went to 5 different states (Washington, Atlanta, Dallas, Boston and Las Vegas) and it was so nice to go to the other side of the world and find people really love and appreciate my music. I want to go to as many places as possible to do the same. I was fortunate enough to shoot a video, visit schools and meet young people, play some gigs and have radio and TV interviews and it was wonderful to be so well received across the board.

Now the album…. how was it put together…

I had a lot of creative input into the album. I knew what I wanted to touch on and so I made a list on past experiences and really dug deep to go back to those occasions and pour out the emotion from each one. I also had a writing team, so together, we worked on each concept and built on my lyrics or created new material from the start to create the uplifting, raw and inspiring album that is ‘You Turn’.

Why are there so many different flavours in there… reggae, R&B, big ballads etc…?

I enjoy many genres and styles of music like a lot of people and so I wanted there to be something for everyone. I don’t think music should be in one box and it’s good to be versatile, I’m different myself. Showing that fact on the album gives people some flavour and takes you on a journey.

… and why the mix of gospel/secular themes?

My music crosses over many boundaries and I don’t think you can categorise it to one genre. It’s stories from the heart so if it make you feel good ad you can relate to it, what does it matter what genre it’s classified to? What matters is that it moved you.

Any particular songs would you like to draw our attention to?

‘Fly Again’ is a song that speaks about not limiting yourself, many times, we are our own limits. I shot a video in Las Vegas for that track recently so people can see it soon and hopefully it will inspire them to aspire to new heights.

Now the Future…… what are your plans….. short term and long term

I have many plans. The bigger picture, I want to be a worldwide artist, known across the waters, touching people with songs that matter. In the short term, my debut album ‘You Turn’ will soon be out, it’s currently available to order on iTunes and following that, I am touring the UK, aiming for a sold out finale concert at The O2 Shepherds Bush Empire, 15th November. It’s a very exciting time.

My website has a host of my journey so you are able to see photos, videos, tour dates and the latest news; AnnastasiaBaker.co.uk. You can also find me on social networks Facebook, Twitter, Instagram and Soundcloud, @AnnastasiaBaker.