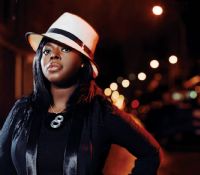 Soul diva-turned-actress, ANGIE STONE, releases a new album, ‘Unexpected,’ in the UK at the beginning of February via Stax Records. Although it’s only Stone’s fifth long player under her own name – her debut was ‘Black Diamond’ back in 1999 – the 48-year-old singer/songwriter originally from Columbia, South Carolina, has, in fact, been an ever-present figure in the recording industry since 1980 when she was a member of a female rap trio.

In a recent interview with www.soulandjazzandfunk.com’s Charles Waring, the neo-soul doyenne talked in depth about her formative years in the music business.

Can you remember your first exposure to music?

I’ve always been exposed to music. My dad was part of a quartet group that would rehearse in my living room every day. I did a talent show when I was nine years old where I sang ‘Love On A Two-Way Street’ (by The Moments) at a park recreation facility in South Carolina. I won first place so I knew then I was musically inclined. My next step was to join a choir in church at eleven-years-old, which I took a leading position in, and everything else is kind of history. Everything happened very young in my life.

Who were your earliest musical influences?

My dad, Marvin Gaye and Curtis Mayfield, Aretha Franklin, Chaka Khan – these were people that I absolutely adored. Also Dorothy Moore, Betty Wright, Ann Peebles, and Gladys Knight – all these people helped shape me to what I am.

You first tasted success with a female rap group called The Sequence on Sugarhill. How did you get started with them?

Well, actually I had started a band in my high school. Cheryl Cook (later of The Sequence) came up and asked me could she get into the band. That was around the time that the group A Taste Of Honey was out with ‘Boogie Oogie Oogie’ – and that was the only tune my band played. After Cheryl and I developed a relationship, we decided to develop a group that sang but then we heard ‘King Tim III (Personality Jock)’ by The Fatback Band. It was the first hip-hop record. We’d never heard of the Sugarhill Gang at the time…actually, we were more inclined to the Fatback Band because they were a southern based group and they were rapping. So we wrote a rap song called ‘Funk You Up’ based on the Fatback Band, and it wasn’t until a week or two later that the Sugarhill Gang released ‘Rapper’s Delight.’ Our song was already done. We ran into Sylvia Robinson (the co-founder of Sugarhill Records) and The Sugarhill Gang at the Township Auditorium in South Carolina and auditioned for her.

Being a singer, were you a reluctant rapper? Was singing still what you really wanted to do?

Oh, singing was absolutely the only thing I wanted to do. Rap was just a gateway into what my heart was conditioned on. I had a lot of fun with being a rapper but I always knew that one day I would prefer to be a singer than a rapper.

After The Sequence disbanded you later surfaced in a group called Vertical Hold in the 1990s. What can you remember about that part of your career and how the group started?

The group formed with me leaving Sugarhill and moving towards a solo career as a songwriter that was starting from scratch. I was paying 100 dollars a day to go in the studio and actually tried to write some songs on my own. I just wanted to bounce back after the group Sequence disbanded. It just happened that the engineer in the studio along with two other guys had studio time and were just cutting tracks. Once they saw my writing skills they came to me and asked me, hey, would it be OK if you wrote some of our tracks? Well, that bartered me free studio time, which was a lot easier than paying for it and creating tracks on my own. So I had a team of people that were using me as a writer and as a result the group Vertical Hold was born.

It wasn’t long after that that you signed with Arista Records. How did you get with them?

Well, just before that I became a featured vocalist for Gerry DeVeaux, who had formed a group for himself called Devox. Gerry DeVeaux asked me to feature on his project. It was called ‘Devox featuring Angie B Stone’ and because it was done overseas (the album was only released in Japan in 1996) the overseas market took to the project very well. Then lo and behold Arista called me and wanted to sign Devox the group – but I wasn’t interested in being in another group with Devox because I had already established a strong foundation of my own through the groups Vertical Hold and The Sequence. Because of that I wasn’t really interested in being in another group. As a result, it offended a lot of people on that team. But after all I was only paid a couple of hundred dollars to feature as a vocalist. That didn’t mean I was going to commit to a group called Devox. It was a very sticky situation but Arista came to me and said we’re interested in just working with you: is there any way we can make that happen? I said absolutely. However, it caused a split between Devox and me – but I was only originally hired as a featured vocalist and not as a group member.

What plans have you got for the future beyond your new album, ‘Unexpected’?

You’re due to come to the UK in March to do some live dates. How you feel about that prospect?

I’m really, really excited because I’m so well received in the UK. Some of the great artists here in the United States have asked me to bring them with me because they need their presence there. One artist in particular, who’s one of my favourites – his name is Raheem DeVaughan – has never been in the UK. I think he is an exceptional soul talent and I will actually get him to join me on one or two gigs there.

‘Unexpected’ is released on February 1st 2010. Her UK tour kicks off at the Picture House, Edinburgh on March 2nd and moves to the Manchester Academy on March 3rd, the Birmingham Academy on March 4th and culminates with an appearance at the Hammersmith Apollo on Friday March 5th. Also look out for Angie Stone in the forthcoming Hollywood teen comedy movie, ‘School Gyrls.’