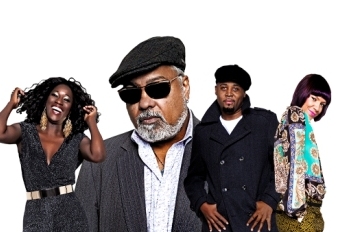 The incomparable INCOGNITO have just released their 16th studio album. ‘Amplified Soul’ is a wonderful collection that offers everything we’ve come to know and love about the band but it also manages to generate plenty that’s new and fresh.

With Incogntio all set to go on the road with Chaka Khan, the band’s main man BLUEY MAUNICK found the time to talk to soulandjazzandfunk about the new long player and other things soulful. The first thing we wanted to know is why call the album ‘Amplified Soul’?

The amplified soul is the thing within you that digs in and drives you to complete a task or see through an idea that seems out of reach. It is the elevated senses that make you enhance something already strong and meaningful to a higher level. It is bold and true…”The amplified soul is that of a pure spirit”! So, the content and experience of making this album, the joy of crafting songs with people like Carleen Anderson, Deborah Bond and with members of Incognito past and present was highly representative of the amplified soul!

On the album you’ve used many of your usual Incogntio team – people like Tony (Momrelle) and Vanessa (Haynes)…. tell us about some of the newcomers… what do you think they bring to the classic Incognito sound?

Katie Leone joined the band prior to the making of this album and from the moment she stepped up on stage I knew that she would bring something fresh and exciting to our sound. The fans have taken to her in the same way. Chiara Hunter is a young Australian singer and song writer who I brought in to give a new sense of direction as she is from a completely different generation but musically and mature beyond her years. The sheer excitement of fresh ideas turns to inspiration in my world.

Lots of different vocalists again… How do you allocate singers to particular songs?

You get to know your singers and you want every word that comes from their mouths to be believable. That in mind, you either co write with them or write for them in mind. In the case of “Silver Shadow” (the only cover song on the album), the lyrics could have been written as a soundtrack to Vanessa Haynes’s life. From a young age travelling the world singing to people was her dream. She loved performing, but had been discouraged. But as is true of the amplified soul we just talked about, she fought hard and followed her star and the path of that silver shadow that shone so brightly in her heart and soul. The strength of her delivery and quality of her voice on that song and the others that I wrote purposefully for her is clearly evident for all to hear. As a producer that is my main aim and bringing something extra out of singers is my mission in life, I work hard at achieving that. The rest is serendipity!

What track on ‘Amplified Soul’ do you think best sums up the current sound of Incognito?

“Hats” is a fresh approach and a continuation of where I left off with “Goodbye To Yesterday” on the previous album. That said it may be a fairly new direction for Incognito but its roots are from the Motown era. “Deeper still” is also a song that embraces the pulse and harmonics of the neo soul and modern R&B sound branded by the likes of Erykah Badu and Jill Scott.

As you’ve said there’s just one cover on the album –a version of “Silver Shadow”. What do you think you bring to it that’s different to the classic Atlantic Starr version.

Finally (almost) after such a long time in the business – do you still listen to music for pleasure…. and if so, who are you currently listening to?

Listening to music still brings me great joy and pleasure. The top ten songs in my current list are all Chaka Khan songs as Incognito will be her backing band for her up-coming UK dates. But beyond that here’s my current favourite twenty…

“The Mystery of Man” by Sarah Vaughan (1984) from The Planet Is Alive…Let it Live!

Final finally, you must be the hardest working man in soul – Incognito albums, solo albums, the Citrus Sun project, producing and mixing for others and touring… how do you fit it all in and stay so fresh and inspired?

Fortunately for me I am living my dream of being a travelling songwriter musician. I am inspired by life’s journey and the richness of my adventures. I work hard for the same reasons most of us work hard… I may be living the dream, but the dream does not always recompense you financially, and I like most folks on the planet, I have bills to pay!

Incognito’s ‘Amplified Soul’ is officially released on earMUSIC on June 30th… there’s a full review on our review pages.