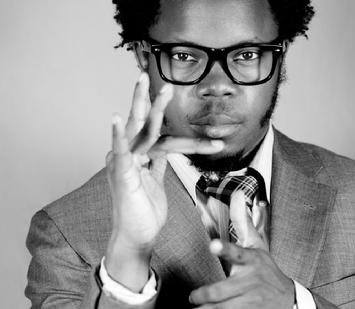 “This is a very clichéd thing to say,” explains genial horn man, AMBROSE AKINMUSIRE, from his home in Oakland, California “but I never really had a period of just checking out trumpet players. In fact, I don’t like the trumpet.” Realising the absurdity of this statement – given that he’s a trumpet player and one that jazz critics have been recently raving about – he laughs: gently at first, but then uproariously. For a man that makes intensely serious music, Ambrose Akinmusire is almost crying with laughter. “Look, I listen to trumpet players but not exclusively,” he corrects himself, his laughter subsiding, replaced by a more sober tone. “But I’ve always checked out other people – like Coltrane and Herbie (Hancock), Ahmad Jamal – because I feel that a lot of jazz musicians get caught up in their instruments and they only check out people on their instrument.” …

Certainly, Akinmusire’s approach to his favoured instrument and the rich, rounded, tone he produces distinguishes him from other trumpet players. From the first time he picked up a trumpet at the age of twelve he set about finding his own musical voice. “You really have to work on your sound,” he stresses. “That’s something I worked on from a young age. And I always wanted to sound like a French horn or a cello.”

After studying jazz, he toured in Macy Gray’s band. He enjoyed the experience but musically it was disheartening. “They wanted me to solo a certain type of way but I just can’t play the same part every night. It’s not who I am. You had to dress in costumes as well. I understand the pop mentality but I said to myself: never again will I do this.”

When the tour finished, Akinmusire went back to jazz, entered the annual Thelonious Monk competition – one of the most prestigious competitions in the jazz world – and won it. The panel of judges included Quincy Jones and Clark Terry. That was four years ago and now Akinmusire has released a provocative album on Blue Note, ‘The Heart Emerges Glistening.’ Says Akinmusire: “The title refers to being honest 100% and presenting every aspect of yourself in every situation.”

Song titles, he says, are profoundly important to him. “I always start with the titles. In most cases these days I have a whole story to tell. I’ll start with the story and then the story will give me the title and then I create the music.” Certainly songs like ‘Confessions To My Unborn Daughter’ – which opens the album – and the evocative and mournful ‘Tear Stained Suicide Manifesto’ make an imprint on the listener as much for the images their titles convey as the notes and sounds they’re created from.

But despite the aura of supreme confidence and sense of assurance that his debut album projects, the young trumpeter candidly confesses that in his own mind he’s not quite the finished article yet. “Composition is one of my weak points,” he reveals. “Not necessarily a weak point but it doesn’t come easily to me – it’s very gruelling.” The hard work, though, seems to have paid off and the plaudits are raining down on the 29-year-old from California.

Interestingly, there is only one cover on the album – ‘What’s New’ by hard bop trumpet legend, Clifford Brown, who died tragically in a car crash in the mid-’50s. “It’s one of my favourite songs,” enthuses Akinmusire, “both to listen to it and to play it. It’s from ‘Clifford Brown With Strings’ and it’s one of the first examples of a trumpet ballad that really, really, captured me. We were in the studio and we literally had recorded ‘The Walls Of Lechuguilla’ (one of Akinmusire’s own songs) and I said, ‘wow, man, that was really out. It would be really funny if we just played “What’s New” right now’ and we did it sort of as a tongue in cheek type of thing but it came out great.”

Fellow Blue Note artist and eminent pianist, Jason Moran, was Akinmusire’s co-producer. “I’ve known Jason for at least 10 years now,” says the trumpeter, explaining Moran’s input on the album. “Jason was someone that I used to – and I still do – turn to for advice in my life and career and music. So when it came to picking a producer or someone to help me produce the album, Jason was the obvious choice for me. He came to a couple of gigs before the recording session and took three or four notepads full of notes. He then came to the studio with them and would go around to each member of the band and suggest certain things to them. But overall his vibe – and him just being in the studio – really helped push the album forward because Jason doesn’t stand for any bullshit. He is a reminder that music used to be about music 100% and that it can actually work because since he’s been with Blue Note he’s been about the music. He hasn’t sold out and he hasn’t compromised anything so having him in the studio was a great reminder of that.”

Rewinding to the past, what first attracted the young trumpeter to jazz? “I started playing jazz in the eighth grade in middle school,” recalls Akinmusire, who initially learned to play piano at the age of four in his local church. “I won tickets on a radio station to go to Yoshi’s (a club in LA) to see the Art Ensemble of Chicago actually. That was my first jazz show so I went to that and I met Lester Bowie. I wasn’t so caught up in it but it definitely made me start checking out things. Then I went to a few summer camps around the Bay Area and things like that. But I was always a practiser and from day one I was always improvising – not knowing that it was jazz. Also, there are a lot of similarities in black gospel music, and black Baptist music, to jazz. So it wasn’t like ‘now I’m playing jazz’ – it was something that I was doing already.”

The young trumpet sensation is due to play at Ronnie Scott’s on May 11th with his band. What can a British audience expect to see and hear? “You can expect some killing musicians,” responds Akinmusire. “I’m speaking of my band: Walter Smith III, Harish Ragham on bass and Justin Brown on drums and Sam Harris on piano. To me, they’re some of the most innovative musicians in New York.”

As to the future and looking beyond this album, Ambrose Akinmusire – who says Joni Mitchell is a big influence on him – says he’d like to work with some female vocalists, especially Joanna Newsom and Norah Jones. “Man, I love the female voice because it’s in the same range as the trumpet. A lot of times I try to imitate the female voice with my horn.”

‘When The Heart Emerges Glistening’ is out now on Blue Note. You can see Ambrose Akinmusire at Ronnie Scott’s on May 18th.