ALL YOU NEED IS LOVE… the Isaac Aragon interview. 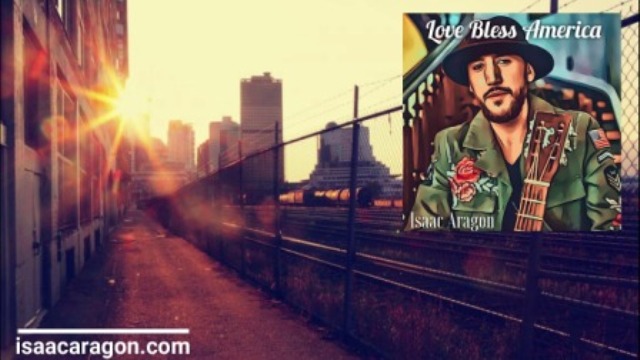 ‘Love Bless America’ is the latest single from US blue eyed soulster ISAAC ARAGON. if you read the savvy soul media you’ll know all about it; if you listen to the better soul stations, you’ll have heard it…. it’s been critically acclaimed and winning plenty of airplay. Surprisingly, maybe, nobody knows too much about Mr Aragon. So, to find out more we hooked up with him and he started by telling us a little something about himself….

I’m 29 years old, and I was born in a small, mountainous area in the northern part of New Mexico, USA. Most of my adult life has been spent in Albuquerque, NM. New Mexico is a crossroads for many very strong and distinct cultures and the music I was raised on was a reflection of that. I was raised with the sounds of Spanish flamenco guitar, Native American drums, Mexican mariachis, Depression era Delta Blues, Rock and Roll, and of course the music that CHOSE me…Soul Music.

Growing up, then, who were you musical heroes and influences?

First I must say that I was brought to music by my parents. They played/sang old Spanish Catholic songs at church every Sunday, and it was they who put a guitar in my hands in the first place. But I didn’t quite take to it, not even a little bit…there was no purpose, no incentive. I wasn’t spiritually moved by music…until I heard Bill Withers. Bill Withers changed, forever, the trajectory of my life. Simplicity. Raw, sincere human emotion. I never knew how powerful the human voice could be, and how one could say so much with so few words. My discovery of Bill led me on an inevitable journey to Stevie Wonder and Marvin Gaye. Equally powerful musicians and songwriters in their respective ways. These 3 true artists taught me how to speak to the world about society, about politics…and turn it into a palatable, beautiful experience. And it has since been my goal to carry that torch (making soulful, socially conscious music), while defining a voice and sound distinctly my own. A few other notable influences of mine are Donny Hathaway, Gregory Porter, and Allen Stone.

When did you decide to make a career in music and how would you define the sound you set out to create?

To be honest, I’ve just now taken the leap of faith…in 2019. I studied for 8 years to be a Physiotherapist, and have been practicing as a professional for 3 years now. I’ve loved what I do…helping people on their road to healing. But I’ve come to the realization that my musical calling is essentially the same work through a different medium. My music is intended to bring physical, spiritual, and social HEALING. I’ve finally made the commitment to healing solely through my music. I’ve pursued my artistic aspirations “part time” for years now, but only in the past 2 months have I been able to do so with all my time and energy as a full time musician. The sound I’ve set out to create is guided by my musical intention. My songs are intended to make people feel good, but also think deeply and critically. There are plenty of protest songs, social change songs, etc…None more effective, in my opinion, than those that provoke change and action to the sound of an infectious groove or melody that makes you wanna get up and dance! Marvin Gaye’s “What’s Goin’ On” is a classic example. It’s candy-coated medicine.

So where did you start?

I’m primarily a self-taught musician. Once I was swept up by music, I started writing songs and performing anywhere I could. Busking, playing open mics, etc. It wasn’t long before I was taking gigs as a solo performer to pay my way through college and grad school. I had some good fortune in 2015, winning the Telluride Blues Challenge at the Telluride Blues and Brews Festival in Colorado. This gave me the opportunity to perform in front of quite a large crowd, and grace the same stage as many blues and soul greats. I continued working on my song writing, recording, and performing and was invited back in 2016 to perform the festival again with my band “Isaac Aragon & The Healing”. I spent the next several years performing at various festivals and venues in the South-western US, and writing/recording more material. I had the opportunity to work with a phenomenal producer in the Summer of 2018, and the tune “Love Bless America” was birthed. I finally had the sound that I would be proud to introduce to the world…and I’ve been working Independently to market the song since. I do all my own booking, promotion, publicity, marketing, etc. I’m learning with every step, but I’ve been fortunate to cross paths with so many talented and gracious folks who have helped me along the way.

Now that song….LOVE BLESS AMERICA…. was it inspired by a certain politician with a day glo tan and the world’s worst comb over?

Ha! Inspiration comes in many forms! I’ll allow plenty of room for interpretation. All joking aside…it’s no secret that America appears to be in a time of great divide. Whether a facade or a reality, it’s a division we feel all too tangibly in all walks of life…even now in sporting events, such as American Football. It’s frustrating and disheartening; but of course any negativity and frustration can breed inspiration and motivation for change and betterment. After much soul-searching, I had a vision of clarity. Not an answer, but perhaps at least some insight. With this song, I wanted to express the notion that our divisions aren’t nearly as prominent as they can sometimes appear to be, and that just maybe we’re more alike than we are different. Christian conservatives preach “God”, Liberal revolutionaries preach “Love”. Are those really opposing ideals? That’s a question the listener has to answer themselves, but the real message in the song is that LOVE is a choice. It’s not a passive blessing; it’s an act…completely active. Love does not come easy. We must choose to love. Love is sacrifice, love is compromise. Only through these acts will America, and the world for that matter, see true change.

How was it produced… where was it recorded… what kind of sound were you aiming for?

The song was recorded at Eagle Wind Sound Studios in Winter Park, CO. I won a song writing competition (not with ‘Love Bless America’), and was awarded some free studio time. I gathered the BEST musicians I knew, stuffed them into a car and drove up to Colorado. In the weeks leading up to the session, I searched my heart, my mind, and my soul frantically for something significant to say. When I had just about reached delirium, it all clicked and the song began to take shape. I showed the guys my rough demo recording in the car as we were about an hour out from the studio! They brainstormed some arrangements, and we began putting it together as we got to the studio. We ran through it a few times, and laid it down the next day. The song was Engineered and Produced by someone who has become a dear friend and mentor, PJ Olsson. PJ is the lead singer and producer for the Alan Parsons Project. He’s such a soulful dude; all about the artist, and so good at bringing their vision to fruition. He lives at the intersection of creativity and professionalism and world class quality. To no surprise, he won his first Grammy with Alan in Production this year; we’re super proud of him.

And those lovely horn parts?

They were arranged by my long-time friend and colleague, fellow New Mexican Ryan Montano. Ryan is a super talented jazz trumpeter here in NM. We’ve worked together on several projects, but he came into these sessions with some serious voodoo. He worked up the arrangements, which are all trumpet, and it’s undeniable that those arrangements elevate the song to another level entirely. Be sure to check out Ryan’s music, he’s a special artist. I also had Paul Palmer III on drums, the masterful Artha Meadors on Bass guitar, Dee Brown on Keys, and Jeremy Campos on supporting electric guitar. These guys are like my family. We play together live, too, so the live shows sound just like the studio!

The record’s doing well in the UK… are you surprised at that?

Completely surprised! I’m still in shock at how open and receptive UK dj’s have been in even just checking out new music. I’m super appreciative that the song has found a receptive platform. The beautiful thing is…the title specifies “America”…but the concept/philosophy is applicable to any culture/society in the world. It simply addresses a dichotomy, and presents a mantra for unity…regardless of country or place.

How’s it doing in the US…. are the two markets very different?

I haven’t found an effective promotional strategy here in the States just yet, so the song has been limited to my fan base and community for the most part. The two markets, from my perspective, are ENTIRELY different. Our radio network is like a machine. There’s a formula and a dollar amount which lead to success. Over there – the UK – the market seems to still be driven by the people. It’s very grassroots. I’ve contacted writers and DJ’s, they’ve really dug the song, and decided to feature it…now it’s on the UK Soul Charts. It just makes sense. I dig what you guys have created. You know and appreciate real music.

OK so what’s your next move…?

I plan to continue promoting “Love Bless America” as far and wide as it will reach, beginning with other European countries. I’ve got plenty more music to release, and will follow up this track when the timing is right. I anticipate a full length album release later this year, or early 2020. As soon as reasonably possible, I’d love to facilitate a trip out to the UK to perform, continue to build, and meet all you cats that have been so welcoming to me and my art!

And how do you see your future long-term?

I’m living out my dream every day. My goal is just to be able to live it out on a grander (more global) scale. To tour my art and travel the world, connecting with people through music and humanity. Experience different countries and cultures, using music as a vehicle to play and sing but also listen. To teach but also learn. To forever continue making music and art, and leave a trail of peace and a legacy of LOVE everywhere I go.

Social media, of course, but my web site is www.isaacaragon.com