ABOVE… BELOW… AND ABOUT WITH ANTHONY DAVID … 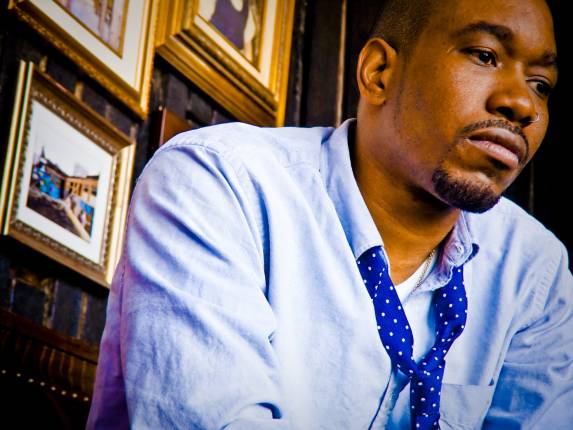 With two fine albums under his belt Atlanta-based ANTHONY DAVID has won a reputation as a concerned and committed soul singer. His writing skills and understated delivery has made many draw a comparison with BILL WITHERS, but ANTHONY is quickly proving he can be his own man. Moreover, PRESIDENT OBAMA has recently admitted that MR DAVID is on his radar – “You know I have actually been listening to some neo-soul. The First Lady turned me onto ANTHONY DAVID – he’s got some nice music“. With a new album set for release – ‘As Above So Below’ – we needed to talk with ANTHONY to find out more that “nice music” – and of course that OBAMA connection…. we began, though, by asking MR.D. about how he got into music…..

I’ve always been a writer, and music became a way I could express myself. I got involved in the poetry scene here in Atlanta first, then music became an expansion of that. I’m a communicator first and foremost.

Briefly update us on your CV – how you got from where you started to where you are now…..

I did two independent albums, ‘3 Chords And The Truth’ and ‘Red Clay Chronicle’. They were released in the States and abroad. Then Universal combined the two and named the new set ‘Acey Duecy’. My single ‘Words’, a duet with INDIA ARIE, a good friend and collaborator for years, got nominated for a Grammy. I then left Universal for Purpose Music group in 09 and began work on my current album, ‘As Above So Below’.

Though you’re from Savannah, you work out of Atlanta … why do you think the city has such a vibrant and exciting soul scene?

It’s a great place because people are allowed to cultivate their talent here, and there are plenty of people who will support them, even without having a big name.

Many commentators – even PRESIDENT OBAMA – describe the soul sounds of Atlanta as “nu-soul” or “neo soul” – what exactly do you up think they mean by that?

It’s not just music from Atlanta, it’s the music of this period in time – where we are now. I think it’s all about the influence of hip-hop music combined with traditional soul sounds.

Let’s talk about the new album – presumably it was recorded in Atlanta?

Well yes, most of the ideas were cultivated in Atlanta in my studio, but then I took the material to Nashville, where we polished and shined it up.

Why did you bring in Nashville’s SHANNON SANDERS to produce it?

SHANNON and I have been friends for a long time, and we always had plans on working together, so this was the perfect time to do it. SHANNON and DREW RAMSEY are great producer/writers, and they have a one-stop-shop setup in Nashville. Plus it was a nice getaway.

What’s with the title – ‘As Above So Below’ – and tell us about the LEONARDO DA VINCI inspired drawing on the cover?

The phrase ‘As Above So Below’ came to me in my reading and just struck me. My writing style speaks to it quite a bit, plus music in general is a form of Magic. You see, this phrase is an understanding of the inner and outer workings. The LEONARDO Vitruvian Man influence was one of a set of pictures I selected when trying to describe my vision to JAY GILMAN, who does all my artwork. I wanted to talk about life in its never ending wonder, even in the most seemingly mundane things, and show how magical that all is. This is what I try to do in my song writing… describe the human condition. Then I found out how DA VINCI was dealing with ideal proportions of man, and the actual man. Little did I know just by looking and liking the picture, that he was addressing the same concept. JAY brought that home to me. We talked a lot about the Golden Rectangle in art, and the 1-4-5 progression in music… you know both of those concepts actually work, but no one knows why or how.

Why did you chose to cover TEARS FOR FEARS’ ‘Rule The World’ and why did you ask your cousin SHAWN STOCKMAN to guest?

The album is a collection of rhythms that I like. I wanted a song with that special shuffle. The CLARK SISTERS (as well as a lot of other gospel artists) use it. STEVIE WONDER used it too – in ‘Master Blaster’. I wanted a song with that particular rhythm. I wrote one, but I didn’t like it. ‘Rule The World’ played, and its political message fits that section of the album, and also the concept I wanted. SHAWN has always been supportive and told me he wanted to be a part of my next project. I called and asked him if he wanted to do that song, and of course he said yeah. Everyone loves that classic.

What’s your favourite song on the album?

What do you hope the album will achieve for you?

… And finally – an obvious question I guess, how do you feel to be name-checked by the OBAMAS? The President says “you have some nice music” and MRS. OBAMA says you’re big on her i-pod….

It’s a highlight of my life. There’s just no other way to put it.

ANTHONY DAVID’S ‘AS ABOVE SO BELOW’ IS RELEASED ON DOME RECORDS ON FEBRUARY 21ST… GO TO OUR REVIEWS PAGES FOR SJF’S OPINION OF THE ALBUM …..