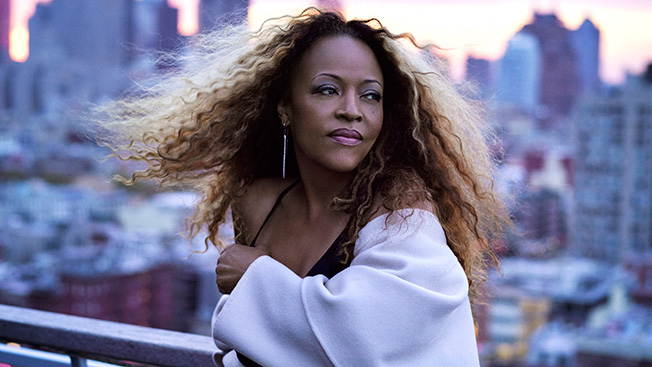 Some musicians are boxed in by the demands of their record company as well as the expectations of their fans and therefore find it hard to grow and evolve as artists. But that’s never been a problem for Cassandra Wilson, the husky-voiced Mississippi-born singer who has never been afraid to take risks. “I’ve gotten into trouble for it but it’s been a great ride,” declared the 59-year-old two-time Grammy winner to SJF’s Charles Waring recently. “I’m proud of the work that I’ve done. I’m happy and can look at myself in the mirror.” Above all, she thanks jazz saxophonist Steve Coleman – an early key collaborator in her career – for opening her eyes and ears. “He was the one who really steered me clear of doing standard repertoire,” she reveals. “He said to me it’s very important that you develop your own voice for your own time.”

And that’s exactly what Cassandra Wilson has done since she began her recording career back in 1986. Since then she’s been forging her own singular path and though some people describe her music as being jazz-based, in reality it’s is a seamless synthesis of different genres that cannot be comfortably pigeonholed. There’s jazz DNA, certainly, in her music, but there are also elements absorbed from soul, folk, blues, country and world music. The singer’s latest opus is ‘Coming Forth By Day,’ intended as a tribute to mark the centenary of iconic jazz chanteuse, Billie Holiday, but in true Cassandra Wilson fashion, it’s nothing like a straight-ahead jazz vocal album…

Your new album, ‘Coming Forth By Day,’ is in some ways very different from what you’ve done before so what’s the story behind it?

There are many stories behind it but I guess the main thrust of it is that Bruce Lundvall (former head of Blue Note Records) made a suggestion several years ago that I should do a tribute to Billie holiday and I knew that I wanted to do something that would really capture her spirit if she were alive today. So it had to be something that was different from any other approach. And Ed Gerrard, my manager, suggested that I worked with some of Nick Cave’s people. I’ve been a big fan of Nick Cave for a while actually so that was a great idea. I love his work. ‘Grinderman,’ I love that (laughs). But those musicians brought a totally different treatment. They came to the session with different perspectives and I’m always excited when that sort of thing happens because you have these various dreams of approaches to music and people coming together. It’s fascinating to me and I love doing that. It could have been a disaster but I think it came out okay (laughs).

Oh it was great chemistry from the minute we all got together. It was amazing. You’re right, when you take chances like that you can have issues but we were very fortunate I think.

He’s Nick Cave’s producer and I love Nick Cave’s work, both his live stuff and his recorded stuff. That was the suggestion of my manager, Ed Gerrard. He said alright, let’s see what would happen if you work with Nick Cave’s producer. I just love Nick Launay (a producer who’s worked with acts as diverse as Public Image Ltd, The Slits, Talking Heads, Supergrass and Arcade Fire). When I first met him I felt that there was an immediate attraction to him and I just had a feeling that he was a kindred spirit. His style and what he does, the way that he builds his aural landscape and that sound is just crazy.

What’s his strength then as a producer do you think?

He doesn’t speak the technical language of music – that’s his strength. Jazz musicians tend to be a little bit difficult…

Yeah, they’re the ones who are really flaunting their skills and they want the world to know how much they know. So that can be a challenge to someone who doesn’t really know the technical side of things and the language. But I think that was Nick’s strength. He brought this totally raw and instinctual feeling about the music and how he wanted it to sound. He would say weird stuff and wild things but he got what he wanted. He’s brilliant. I love his approach. I wish I could do that.

Going back to Billie Holiday, what do you think her legacy has been?

Well, she’s a monstrous storyteller and musician. I think that she was a rock ‘n’ roll star before there was rock ‘n’ roll.

How much of an influence her she had on you and your approach to jazz music in general?

I’m in her lineage. I look at myself as being in her lineage through Abbey Lincoln. She mines the emotional landscape and she has that ability to reach into your heart with her tone.

What was your reasoning behind the choice of songs?

We narrowed them down from a long list. It was really about finding the songs that really resonated for me and for the group as well. And finding arrangements that worked. There is a story that is being told there but I’m not quite sure what it is yet (laughs). I’m listening to it a lot myself and trying to understand why these songs landed on this particular tribute. There is some sort of underlying theme, I think, but I haven’t figured it out yet.

Wow, I like that. That’s a great take. Because it’s true, you know.

Those songs are antiques, if you like, among songs but what they say is still relevant today…

They do. They stand the test of time.

Definitely. The album ends with a track that you wrote yourself called ‘Last Song (for Lester).’ What’s that about?

I told the guys (in the band) about the story of Billie Holiday when she was actually in London and heard about Lester Young’s passing. They were very, very close: musical soulmates. So when she attended the funeral she wanted to sing but she wasn’t allowed to sing so that was really devastating for her. So we wrote the song for her to sing for Lester.

As a singer, how do you approach a song that is iconic and has been heard by the public many times before?

I wanted to ask you about the significance of the title ‘Coming Forth by Day,’ and I noticed that there are some Egyptian hieroglyphics on the cover as well…what do they signify?

They say ‘coming forth by day’ or ‘he comes forth by day,’ which is taken from what is formally known as the ‘Egyptian Book Of The Dead’ translated by Wallace Budge. But the literal translation of that is coming ‘Forth by day and by night.’ The ancient Egyptians didn’t believe in death, they believed that when you made a transition you went into the afterlife and then you were born again, so we are re-birthing spirit of Billie Holiday for the 21st century.

Her nickname was Lady Day, so was that part of the thinking as well?

Exactly. It’s a play on that as well.

How was it having Van Dyke Parks is your string arranger? He bought some lovely arrangements to your album, didn’t he?

He did a particularly striking arrangement on your version of ‘You Go To My Head.’

The song ends and then it’s got a string coda on the end which is amazing….

Oh my God, that coda is crazy! I love listening to that. We may even play that on stage. (Guitarist) Kevin Briet has this recording of it and he was playing it the other day. We want to play it on stage because it’s magnificent. It is some of the best, most creative, string work that I’ve heard in a long time.

You’re originally from Mississippi… When you were growing up in Jackson, was there much of a music scene there?

Yes, there was quite a music scene when I was very young. My father was a musician and there was a lot of blues and jazz happening there. Not so much now. It’s mostly blues now but at one period it was very much a hotbed of new music, the combination of blues and jazz.

Do you have any unfulfilled ambitions at all?

I would love to be able to write music, the way that Van Dyke Parks does. I’d love to be able to arrange on that level, in that way. That’s a fantasy that I have but that would take another lifetime I think. I just love music, all kinds of music. It’s such a wonderful language. A universal language.

Is there anybody that you’d like to work with that you haven’t worked with before?

There’s so many people. Joni Mitchell. She’s a goddess and a genius.

What’s in the pipeline after this album?

I never plan ahead. That way, when it happens, I’m surprised.

What was it like willing to Grammy awards? Are you somebody that likes getting recognition from the industry?

I’m really so focused on my work and the music and there’s so much gratification inside of doing that. But it’s always great to be acknowledged by your peers, and that’s what the Grammys are. It’s a wonderful feeling. And I love my Grammys. I have mine on display. One is in upstate New York and the other is in Mississippi.

CASSANDRA WILSON’S NEW ALBUM ‘COMING FORTH BY DAY’ IS OUT NOW VIA COLUMBIA LEGACY.