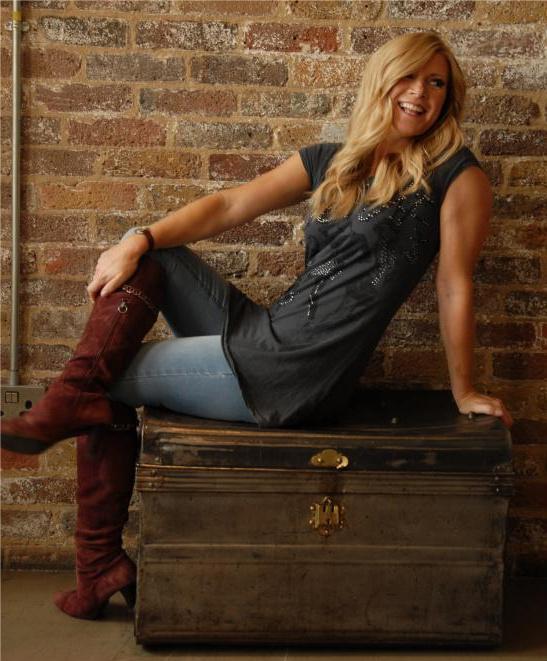 What’s the background story to your second album, ‘Captivated’?

It was time to share something new. I made the first album ‘Tell Me More’ in 2006, released it in 2007 and then in 2009 I got inspired to create something unique that would be true to my 70s pop and soul roots but in a jazz context.

Your choice of material is interesting. What attracted you to Michael Jackson’s ‘Human Nature’?

Michael Jackson was a strong influence on my musical taste and by ‘radio osmosis’ I learned a lot from his amazing voice, vocal style and sheer grooviness. I wanted to include him and his legacy on this album and after a chat with Rob Taggart about this tune versus Stop ‘Til You Get Enough’ (one of my absolute favourites but hard to re-interpret well), we got excited about this one. It’s so moving and Rob had a great mellow arrangement idea for it straightaway.

You cover Stevie Wonder’s ‘I Can Only Be Me’ – what’s your take on Stevie and his music and why did you choose this song?

Stevie Wonder moves me with every tune. The soul in his voice, the quality of his writing, the unexpected twists and turns in his melodies (there’s always a surprise), the incredible harmony …his music excites me. I could go on and on. This tune is about being yourself, a strong motivation for me behind making this album (fusing jazz with my original R&B influences and the pop sounds I grew up with). I love the lyric, the soaring melody is beautiful and it’s short and to the point. It was written for a film in the late-80s called ‘School Daze’ and was never released on any of Stevie’s albums, so it’s a rare find. I adore it, and as with Michael Jackson, I wanted this album to have Stevie on it somewhere. Both artists are too important in my listening and singing history to leave out.

You do a version of a Barry Gray song, ‘Dangerous Game,’ taken I believe, from the puppet TV show, ‘Thunderbirds.’ What prompted you to cover it?

My boyfriend had it on his iPod Shuffle in the house and it came up about 3 times in one week. I kept asking what it was and immediately forgetting as the answer was so random and I wasn’t a Thunderbirds connoisseur! Eventually we sat down in the early hours after a jazz night out and in a scene of comedy madness acted out every single word so that I could learn it for a gig. It stuck and I chose it as a novelty track for the album. I wanted it as a sultry rhumba because I loved the similar ‘You’re My Thrill’ from my first album.

Derek Nash produced the album – what was he like to work with and what qualities does he have as a producer that you like and appreciate?

He did the first album too. He’s an incredibly can-do, skilled, experienced, efficient and knowledgeable producer and engineer and I always knew I’d go back there. Nothing is too much trouble when we’re mixing and editing. Several press reviews of the first album commented on the production quality so it was a done deal as far as I was concerned.

Tell us about some of the musicians involved on the album.

They’re all top of their game, they’re all decent, genuine, likeable guys and they all make me laugh. Mike (drums) and Simon (saxes) were also on the first album in 2006/7and then over the last two years l’ve been working a lot with Rob (keys) and Paul and Pat (bass) so there was no question that they would be involved. Paul Morgan plays acoustic bass on three of the jazz tunes – I love his sound and there’s so much character in his playing. All the other tunes except ‘I Can Only Be Me’ are with electric bass and Pat is one of the grooviest players around. The other crucial thing for me and for this material is that Mike, Rob, Simon and Pat are all experienced players in pop as well as jazz. For drums in particular that’s a hard combination to find and Mike is known for his brilliance in both fields. He’s also hilarious and there’s never a dull moment – in the gigs, the studio or the tunes!

The album includes two songs you co-penned with Rob Taggart (‘Captivated’ and ‘You Move Me’). What was it like working with Rob and what was the inspiration behind your songs?

As well as his great musical versatility and funkiness, Rob is funny, very can-do and is a great cook!  ‘Captivated’ is a pensive but very passionate tune about leaping into the unknown, trusting your instincts and following your heart. I took Rob the lyrics, some vague bass line ideas and a ‘mood’ but was stuck for the right interesting chords to take it on the journey I wanted it to go on. I love what we achieved with it. I wrote the ‘You Move Me’ lyrics to celebrate the power of music and of true love, and to add some 70s inspired groove to the album! The music was only half written (a bass line and some dodgy chords!) as my keyboard skills aren’t the best and again, Rob really made it what it is.  The layering on that tune also evolved in the studio as the whole band and Derek got involved in building it into what you hear now.

What artists and musicians have influenced you and why?

After Michael Jackson and Stevie Wonder it’s artists like Prince, Terence Trent D’Arby, Whitney Houston, Aretha Franklin and, later on, Lenny Kravitz for his funkiness and passion, Eva Cassidy for her outstanding, beautiful vocals and ability to move me and the incredible singer/songwriter and guitarist Lewis Taylor, who’s reminiscent of Marvin Gaye. I loved the raucousness and the tunes of US rock singer and guitarist Melissa Etheridge too. On the jazz front, which came much later for me, I listened to a lot of Anita O’Day for her infectious character and phrasing and, although it took a while to ‘get’ her, Billie Holiday for her emotion, phrasing and style. Vocally though, my influences are pop and R&B–led. Etta James for her gutsiness too. On today’s UK vocal jazz scene, it’s hard to beat Liane Caroll.

When did you first realise you wanted to be a singer?

When I was about six and spending weekends with my Dad, who’s a guitarist. He wrote ‘Peace of Mind,’ which is on my first album. I wrote a tune with him when I was eight and he encouraged me to sing a lot and taught me some Beatles’ tunes on the guitar. I got very excited by the sounds of the Jacksons and the Bee Gees as a child and spent hours listening to the Top 40 in my room and singing to everyone in the playground! As a teenager I recorded lots of my Dad’s pop tunes in his home studio and covers of Ben E. King and Sam Brown tunes like ‘Stop’.

What are the challenges facing a young female jazz singer in today’s music business?

Being distinctive. Having a sound that doesn’t immediately remind you of someone else’s voice or work. You need to have to be completely true to your own style and tastes and make tunes your own (rather than imitate standards for the sake of it) but you still need to be able to connect with people and ‘touch’ them.

Can you tell me something you haven’t told an interviewer before?

When I lived in Russia for three months in 1991 I nearly got arrested for partying outside in a park at 3am without my passport on me. It was still pretty strict back then. An hour later, the guy was drinking vodka with us and listening to the best in UK pop sounds…

What unfulfilled ambitions do you have music-wise?

I’d like the two originals on this album to gets lots of airplay and response as I’ve never been in a position where I’ve written and recorded something of my own that I’m so sure about. I’d like to do more festival work in the UK and Europe, and many, many, more UK gigs on and beyond the jazz scene.

Lewis Taylor or Lenny Kravitz. So funky, so soulful.

What’s been the highlight of your career to date?

I got a gig at the renowned Brecon Jazz Festival on the strength of the first album – it was full and we got a great response. It helped me to trust that despite the loneliness you can feel in the freelance jazz world, it definitely is all worth it when you make good music that connects people.

For more info on Zena go to: http://www.zenajames.com/