A BRAND NEW ARETHA: The interview…. 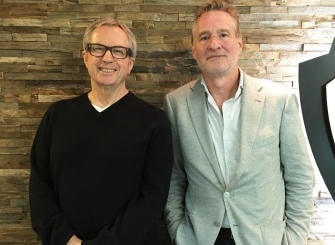 Throughout the year, there have been all kinds of rumours about ARETHA FRANKLIN. First, we heard she was set to retire; next we learned she was working on a new album with people like Elton John, Lionel Richie and Stevie Wonder. Who konws? Anyway, in the meantime, we were told that the curators of her classic Atlantic back catalogue decided it was time to revisit some of her very best recordings as a way of celebrating the 50th anniversary of her Majesty joining the famous old label. Atlantic/Rhino execs, it’s said, decided that it would be a “good idea” to create new musical settings for 14 of Aretha’s best loved recordings and to help them flesh out the idea they drafted in top music producers NICK PATRICK and DON REEDMAN (pictured above) who’d done something similar with a batch of Elvis Presley classics. So, once again – as with the Elvis project – Nick and Don called in London’s Royal Philharmonic Orchestra, and over a sixth month period, ensconced in the legendary Abbey Road studios, they created lush and lavish new backing tracks over which they grafted The Queen Of Soul’s celebrated original vocals. The result is the just released ‘A Brand New Me’ album (see our review section) and since the soul community has generally been impressed by the project, we decided to discover how it all came about. So, hooking up with producers Nick Patrick and Don Reedman we started to dig. First though we needed to know a little about their music credentials….

Well, I started my production career producing world music artists in Paris with artists such as Mory Kante, Youssou N’Dour, Salif Keita and The Gypsy Kings. I then produced many classical crossover artists including Russell Watson, Katherine Jenkins, Amici Forever and Il Divo. Recent projects have included the Elvis Presley Symphonic albums, ‘If I Can Dream’ and ‚’The Wonder of You’ and I’ve also worked on material from Roy Orbison, Marvin Gaye , Tina Turner , Seal, Michael Buble, Ball and Boe, and Placido Domingo.

I started my career in music in publishing and moved on into record companies – in particular, K-Tel, where I started my production career producing the ‘Classic Rock’ series with the London Symphony Orchestra and the ‘Hooked On Classics’ series with The Royal Philharmonic Orchestra. I produced four albums with Michael Crawford and a duet with Michael and Barbra Streisand. Albums by Jane McDonald and Tom Jones followed, and more recently the Elvis Presley albums which Nick mentioned.

OK…. Aretha now….what was the genesis of the project?

The Aretha Franklin Project came about after we had made the ‘If I Can Dream’ album on Elvis Presley. We were then looking for an artist who was completely different to Presley to work with and the thought of Aretha Franklin came up. We went to see Dan Chalmers and Tim Fraser-Harding at Warner. They owned the master tapes and when we suggested the idea they graciously came on board. So, it was really our idea. And why not? She is the most iconic female artist ever and it felt perfect for us. It also required a totally different sensibility and approach which was a great challenge. From the King of Rock n’Roll to the Queen of Soul!!

So once the idea was agreed… where did you start?

The first step in the process was the get access to the original multi track recordings. This is where we had our first surprise on the project. There weren’t any multi tracks for the golden Atlantic Records period of Aretha Franklin’s career!! Honestly. They were destroyed along with many others in a fire at the Warner Bros warehouse in the early 70’s. All that was available for us to work from were the original stereo mix masters, with the exception of the song ‘Angel’ which was a 1973 recording co-produced by Quincy Jones.

I’m guessing you eventually met up with Aretha?

So who chose the songs then… and what criteria were used in selection?

We chose the songs ourselves. We wanted to represent Aretha’s golden Atlantic recording period with the exception of ‘Angel’ which was a later song – but we both felt it was so beautiful that we had to include it and it gave us a lesser known song for people to discover.

Did you have some kind of sonic template for the whole album… for instance the opening track is very Phil Spector-ish.

The sonic template was very much set by the sound of those original recordings. We were working with the stereo mixes as mentioned before so we had to embrace those and add to them. This in fact turned out to give as a very important sonic bridge between the original record and all the new elements that we added. It was very important that the newer recordings did not in any way feel disconnected from Aretha’s vocals. Having said that, we definitely wanted to give the album a 3 dimensional cinematic scale while preserving her incredible raw energy. It is a very delicate process — how the music made you feel was always paramount.

To try to understand how you worked – let’s take a specific example….. ‘I Say A Little Prayer’ – take us through how you reconstructed this one……

‘I Say A Little Prayer’ is a good example of how we approached this album. We started recording with the stereo master of the original 1968 recording. This was the mix with no separate access to the vocals or any other instrumentation. The first task was to create a “tempo map”. The original recording was of course recorded live in the studio with Aretha playing piano and the rhythm section following her. Naturally, the tempo fluctuated throughout each take which was so much a part of the feel of the record. Our newly created tempo map gave our new rhythm section a click track to follow, so they were able to exactly follow the internal tempo movements of the original records. This is one of the most fundamental foundations to this record. This music is all about how it makes you feel and the little tempo acceleration going into the choruses and fluctuations in the verses are so much a part of that. The new drums and bass then played over the original stereo mix , following the same intricate parts. The drum part is complex with a very particular hi hat part in the verses and an almost jazz part over the outro. We then added piano, again following very much that incredible original piano Aretha played. All these new elements were then processed through a forensic editing process were we matched precisely the new drums, bass and piano to the original recording. This is incredibly time consuming to match every little nuance from the new recordings to the old. The result is incredible though because it enabled us the run both recordings together and for them to be exactly in sync allowing us to give the 40 year old original a beautiful new sonic aesthetic without in any way detracting from the original feel. We then commissioned the orchestral arrangement. Robin Smith did a beautiful job on this. We wanted to set the track up differently and so created a completely new orchestral introduction. I think it works beautifully as the listener doesn’t immediately recognize the song but as soon as the original intro kicks in you are drawn into Aretha’s world. The next element to be added was the additional background vocals. The background vocals are so important to all these songs, they almost act as an additional lead melody part in places, especially on “Say a Little Prayer.” Choosing who sang the background vocals with Aretha on this record was one of the most important production decisions we made. Anyone who was going to sing with Aretha Franklin had to be the very best. We asked Patti Austin, Lynne Fiddmont, Valerie Pinkston and Ledisi. They totally understand this music, the harmonies, the sound, the phrasing. They did an amazing job and are a fundamental part of this album. These new elements were again matched exactly to the originals. In the mixing process we were able to use a new technology available which enabled us to raise the lead vocal by approximately 6 db from the original recording allowing us to give Aretha’s vocal performance a new clarity and depth. One additional point on ‘I Say A Little Prayer’ is that we extended the outro and let it build to the end rather than fade, creating an ending not on the original.

A lot of work there… but what was the most difficult song to recreate?

I think the hardest song to recreate was either ‘Border Song’ or ‘People Get Ready’ because on both songs there are moments where the vocal is low in the mix and this made it much harder to keep the vocal sound consistent and also on those 2 songs, the recordings were quite damaged so needed extra restoration. But they turned out to be two of my favourite songs.

Which finished song are you most proud of?

Nick: If I had to pick one song I think it would be ‘Oh Me Oh My’ I just love that song and never get tired of hearing it. That was also a big challenge to recreate but I love how it has turned out.

Don: For me it is ‘Let It Be’. Aretha’s performance is so soulful and really connects to her deep roots of gospel music. The power and the passion of the performance along with the soulful sounds of the orchestra and chorus really hit me in the heart every time.

Did Aretha have any actual input into proceedings….. the final word, anything like that?

Sadly, no she didn’t, although we would have loved that.

But do you know what she thinks of the album?

We have heard that she likes it, which is so important to us.

How would you counter critics who say that you should never tamper with a thing of beauty?

Those recordings are a thing of beauty and this album is not there to replace those in any way. I think a new audience can listen to this album and become Aretha Franklin fans. There is a whole generation of people who were not even born when these original recordings were made. A generation who have Taylor Swift and Ed Sheeran on their iPhones. This album has a sonic aesthetic that is the same as those artists and is not in any way alien to a younger streaming focused audience. We hope this record will introduce Aretha Franklin to a new audience. I hope very much that diehard Aretha fans will appreciate the respect (no pun intended!) that we have tried to show the greatest female artist ever and her incredible body of work.

What’s next for the Nick Patrick and Don Reedman team?

Our Roy Orbison project has just been released and we are very honoured to have the opportunity to work on a Beach Boys project in 2018.

And given a free hand… which artists would you like to do something similar with and why?

There are very few artists that that we both feel we can really bring a new dimension to with this concept but Johnny Cash would be pretty amazing !!! The dark backdrop to his music is again something very different, and would set a whole new set of challenges.

ARETHA FRANKLIN’S ‘A BRAND NEW ME’… is out now on Atlantic/Rhino. Full review in our archive